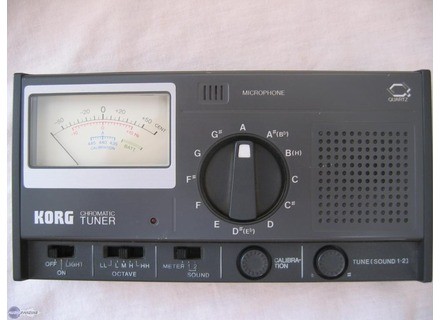 Korg Wt-12
5
It must&nbsp;be twenty years old or maybe more, I can't remember. What I like is its versatility capable of many types&nbsp;of tuning: its awesome. Many parameters can be set. Description: box of 19 cm X 10 cm. On the left side: a plug for connection to an AC adapter and a push button for testing batteries. On the right side: a mini jack for headphones, a jack for the input signal and an output jack is also present&nbsp;(bypass) so that this signal comes out to where it should go. It was also on this side of a push button "cal" to start the calibration. On the back: a metal rod U-shaped elongated, allowing the WT to stand 12 to 60 &deg; on the table, housing four batteries, a diagram explaining the functions of various buttons of the beast, another showing the pitch of several instruments, and operating range of the tuner. On the front: a big VU meter to be used for the various settings. A rotary switch for the 12 semitones (chromatic beast) an internal microphone, a speaker to hear the signal from the tuner. At the bottom of the front, from left to right: Off On button with switch start-up of the lighting of the VU meter, octave selector to work the tuner according to the pitch to give: 5 octaves. A 3-position switch: Meter (you play a note, the tuner shows the VU meter state of the note compared to what it should be really), Sound 1 & 2: the tuner makes the sound of the note selected by the rotary switch with 2 Meter, the sound is louder. Following two rotary knobs difficult to handle, but it's on purpose. The first is called calibration, the second is called Tune and refers to the 1 & 2 Sound Meter selector. Calibration: this is the strong point of this tuner. Indeed, the one is assumed to be 440 Hz if you play one's not very fair, the tuner tells you if it is too high or too short, like all tuners. But it can happen to play with the instruments that can not be solved easily: I am keyboard and it happened very frequently accompany bagpipes to the Celtic and the nails then almost vary greatly from day to day another, one day, they are 440, 445 the next day as the day it was 437. With this tuner, it's easy to agree with those who are not "just" a note was played: the tuner gives away the real Cal is pressed, the rule with the Calibration knob to turn the vertical needle on the zero point and bang you're done, we agree more than with respect to this new scale: when the tuner gives us zero, is that we is provided with hair-stack instruments that are above or below the real value of the note or any other: very handy. The rotary knob is used to Tune up or down the pitch reference that one has chosen and out by the speaker. In conclusion: a very accurate device, which requires a little thought, a little manipulation, that can get out of any galley comes with a black leatherette carrying case with logo "Korg chromatic tuner" printed on it.