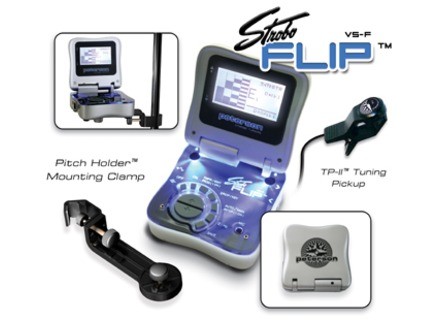 But times, they are a-changin', and travel costs are skyrocketing, and the bulky design of the 400 series makes it less ideal for traveling in some situations.
Peterson has recognized this, and produced numerous models of Virtual Strobe tuners that are smaller and "virtually" as accurate as their true mechanical strobe predecessors.

Beginning with the VS-1 and now the VS-F StroboFlip, Peterson is placing their legendary accuracy into the hands of techs and players alike without the large size and cost of its more flagship bench models.

The StroboFlip is roughly 4 inches by 4 inches square, and about an inch and a half thick, so it's comparably sized to most pedal tuners.
It boasts a staggering 1/1000th of a cent accuracy, and features a Vernier range of A390-490hz, allowing you to tune virtually any instrument to any tolerance, even if it doesn't plug into the tuner (the Stroboflip has a built-in mic).

There are quite a few features within the Stroboflip, among them being 34 built-in presets of temperaments and Peterson's patented "sweeteners", which are variations on perfect intervallic note spacing arrangements, optimized for certain applications and instruments. No other available compact tuner does this. And what's more, you can create your own presets and store up to 244 of them onboard the StroboFlip.

In other features, the StroboFlip includes a mounting clamp, as well as a seperate pickup for tuning acoustic instruments in loud environments. The Stroboflip operates via an included power adapter, or AA batteries. Batteries last for quite a while in the StroboFlip, much longer than a 9V lasts in most pedal tuners. The StroboFlip also has an auto-off function to preserve battery life. Signs of low battery power manifest themselves in a fading display and inability to grab and read a note.

When tuning on the fly, it helps to use the StroboFlip with another, simpler tuner in series simply due to the sensitivity of the StroboFlip. Vibrations in the instrument (especially acoustic instruments) from surrounding frequencies are picked up by the StroboFlip and can make tuning difficult.

Having used several models of Peterson Strobe tuner, I can say that the StroboFlip performs comparably to other models for precise string instrument tuning, so much so that I leave my trusty Peterson 450 model at home and use the StroboFlip on the road. There, I use it to tune electric guitars, bass, mandolin, and acoustic guitars.

At a street price of $235, the StroboFlip is a great value, especially when one considers all it is capable of, and the prices of its mechanical strobe counterparts.

Peterson StroboFlip
5
The Peterson Strobe Tuners Stroboflip is a unique tuner that is designed in a small box, and hence the name, flips open for use. It's got an LCD screen that shows you everything that you need to see, which is a lot as this is definitely one of the more versatile tuners that I've seen. The Stroboflip definitely isn't your typical guitar tuner, as it is really designed to tune any instrument, and specifically is great for tuning those instruments that may not fit into a traditional Western diatonic scale. I don't own this tuner, but have used it in a studio setting where the bass player brought it in. He didn't only use it on bass however, as he also used it to tune his guitar and a unique Indian instrument known as the dilruba. The latter certainly did not seem easy to tune, even with the Stroboflip, but it still got the job done. The Stroboflip is definitley not your simple tuner, as there are many different settings for tuning different instruments, and it allows you to get precise down to the last cents. The small nature of the Peterson Strobe Tuners Stroboflip makes it great for gigging or for bringing to the studio, as it gives you the convenience of a portable tuner with the detail and features that you'd get with a piece of rack equipment. While this tuner is definitely more advanced than most out there, it is also more expensive than most. So while this is certainly an awesome tuner, I wouldn't recommend it if you're looking for something to tune your guitar or bass with, as there are more simple, less expensive tuners out there that will get the job done for simpler applications. However, if you find yourself needing a slick portable tuner for use with a variety of acoustic and electric instruments, the Peterson Strobe Tuners Stroboflip is probably the best bet for you.

See all 5 photos of Peterson StroboFlip »