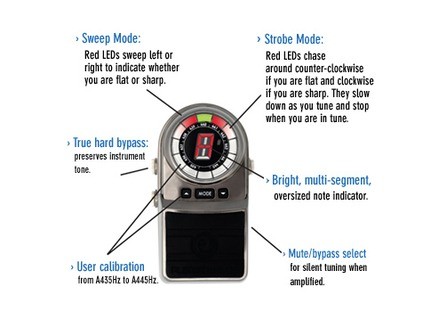 kerry's review (This content has been automatically translated from French)

Planet Waves CT-04 Chromatic Pedal Tuner
5
- How long have you use it?

opinion of 09.03.2010: more than 2 years of use, still no problem apart from the small worries position o mute tuning means when even a little sound that comes out of the cabinet but hey !!!! 4 canvas
Did you find this review helpful?yesno
»

raph2's review (This content has been automatically translated from French)

Planet Waves CT-04 Chromatic Pedal Tuner
4
Reuya a week Thomann, used one time in concert.
Premiere surprise the weight! it's solid! very beautiful bright a gem.
I buy mainly because of the true hard bypass. Nothing to say it is perfect.
I used a boss before, j'tait trs happy with, but not true bypass.
And then use, wonderful. Dj LEDs that we see great, but especially
a tuner who struck the first blow if the free swinging in all directions! Perfect.
The price is quite ok for a camera of this quality which I think is not ready to be gallery!

Added February 07:
I pull out a small canvas, because unfortunately the LEDs are not powerful enough with the lights full lights on, damage
Did you find this review helpful?yesno
»

escobar.17's review (This content has been automatically translated from French)

Planet Waves CT-04 Chromatic Pedal Tuner
5
Used for 6 months,
on the case: by putting his head right, it's super tough and really practice. reading on screen is very simple - the A435 A 445 Hz in red with frquence just green and wholesale center plays the note. the only trouble is when we play in the sun, the visibility is not great.

on functions: personal I not amused schedule a special tuning with so .. but we can prprogrammer his pedals depending on the desired tuning. You can choose also between two OUT connections, one can have a bypass and a switching of the tuner no sound coming out (to match practice between two pieces without a course) and the other one bah start the tuner with lots of noise (choose your camp comrade).

in the end: the fact that it is in fact a PDAL an indispensable accessory in concert. bypass is more than convenient, just to change the scratch during the game without the amp is braille dj nikel, just be careful, even if it is plugged in and battery, begins to eat the battery soon as you plug INSERT. There's just this concern for visibility in the sun that is that I enlve a point.
Did you find this review helpful?yesno
»
Read the 10 user reviews on the Planet Waves CT-04 Chromatic Pedal Tuner »