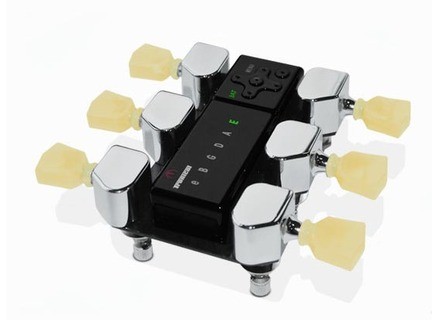 theex's review (This content has been automatically translated from French)" Cheerful"

Tronical TronicalTune
4
I use it for 3 months, the C1 model Squier Jazzmaster Joe Mascis.

Interested in discovering opentunings I was looking for a guitar that take charge of them. I tested digital Variax 300 but the sound of this guitar did not satisfy me, especially when you just change the tuning.

Mounted a small half hour, replacing mechanical without modifying / pierce his guitar, unlike other systems. It weighs a few hundred grams and is discrete (behind the handle).

The guitar actually gives access to a database of 12 open tunings + 6 we can create, to learn, this is for me the major advantage of this solution. It is like having several instruments.

The transition to a new remote tuning can take a good fifteen seconds, requiring to do rope rope.

The system can be disengaged to manually tune if necessary, even if the precision is average.

The downside is that you can not just save all open new kinds of unusual and exotic tuning of his own, because the system works on a frequency range from rope. In my case I can not save the simple way AAEEAE.

Another positive point is the support service and the development team very attentive and responsive.

This mechanism requires following a few rules when it manipulates, such as do not screw too tightly, as otherwise the mechanical break. If entrusted his guitar to a luthier (eg for racordage), it may be useful to raise awareness of the need to be well documented on this system. Otherwise if it breaks it can create a dispute.

Points not tested: tuning in noisy environments (concert), and accuracy in the absolute tuning. In relative that's OK. For those interested, I will specifically test.

In the end, despite the limitations mentioned: the pleasure of now several guitars in one!

stadelmann's review (This content has been automatically translated from French)" I am delighted!"

Tronical TronicalTune
4
I took the C1 model, and I mounted my strat Eric Johnson, I have a little bigger holes.
I'm floating vibrato with tremsetter setting. Well, it works nickel, yes it is not only a gadget, tuning semitone below the slash

. About 10 seconds, good I put grease on the nut it helps a lot.
I think it reacts like a TC Polytune
It's cool I'm happy, I recommend it. Do not forget that I have a round room that transmits vibrations background. Therefore may not be as accurate with all the guitars?

palmazou's review (This content has been automatically translated from French)" blah!"

Tronical TronicalTune
I placed it on a 335 left. First they sent me two right-handed before sending me a lefty kits then it was specified in the command.
I did three concerts and frankly, it's disappointing.
The system takes a long time before giving especially Si and Mi
When I check the tuning it gives me with my Boss tuner, some strings are too low, others too high.
Then he sometimes gives wacky tunings when there is agreement in a noisy environment - (impossible to agree within a song)
In short, I wanted to save time hoping for a nickel tune in a few seconds, I am very far from what I expected.

28 of 28 people found this review helpful

Published on 04/08/13
Tronical, a manufacturer specialized in instrument tuning, will introduce at Musikmesse its new TronicalTune system for guitar and bass.