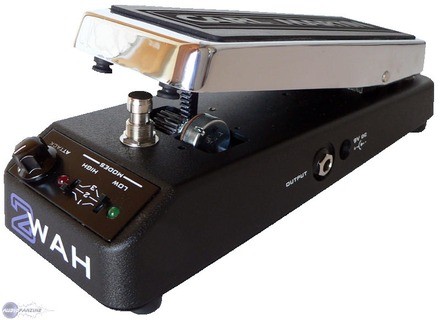 This so called wah wah the 2 as it switches to walking and playing, a wah "serious" for solos (no body) to a wah "acute" to the rhythmic (more clapping).

The build quality is the rendezvous. The pedal seems sturdy. Cons by the selectors of the 2 methods "low" and "high" low-end plastic disappoint.

Operation is simple. No internal trim pots, everything is under the fingers or under his foot! And for once, not multiple complicated settings in which they ultimately lost.
The scale is accurate, sensitive and progressive.
Potentiometer "attack" command Q is progressive and precise.
The switches are well calibrated.

The idea of ​​having 2 wahs underfoot quickly and easily accessible, one for rhythm and one for the solo is very good (the Boss PW-10 also offers this mode, a switch with electronic and digital technology MSOC) .

Quality is at the appointment. Unfortunately here, no wah-wah in Danish, but reproductions of classic wahs years 60'-70 'for vintage sounds with character, from blues to funk to rock.
The settings of the Q factor and the frequency swept offers a great versatility in this pedal.
Above all, the ability to switch between wah worse, with more body, a sharper and sharper wah for rhythm, while playing, allows you to vary the pleasures within the same song.
For the LO mode, we find the roundness, warmth and creamy wahs of the late 60 ', with low invasive and never a good definition.
For mode "high", the funky wah proves to perfection, with a beautiful and dynamic highs never garish.
The scanning frequency is always sweet.
The move from "low" to "high" is silent.

So of course with such potential, we begin to dream of a boost assignable to any channel and an independent control of Q for each mode. This would provide even more opportunities and nuances. But here it was already largely under the foot.

This is a wah that misunderstood that should be more interested in her.
Nice vintage sound, remarkable versatility and above all the possibility, though rare, to pass a wah (rather typed rhythm) to another (rather typed solo) with one push on the heel of the rocker.

An excellent wah which could be further improved for himself among the best.