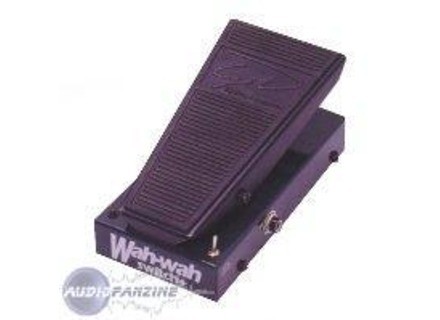 Guilll's review (This content has been automatically translated from French)

George Dennis Wah Switch+
4
So mine is the switch at all, not the + switch. This is a normal wah pedal with one input and one output jack (what a surprise), a conventional power supply or 9V adapter (minijack format, the loose) switch and a bass / treble, which selects the frequencies on which the effect acts.

It is an optical wah, that is to say that the movement of the pedal is detected optically, not mechanically. Still less that it could seize up ... : O)

The housing is made of metal, apparently very strong and built more or less traditional: the serial number is handwritten. Above all, the most important (even essential): it is PINK! Very spychédélique: o)

I put 8 because nothing fancy but very practical and solid ... minijack power supply except that the nuts!

Like all basic wah, use is childish: you turn the pedal by pushing hard on it, triggering a button under the pedal (you can also do it with your fingers), and then made wahwah ... The magnitude of the movement of the pedal is quite large, we can put a bit of subtlety (well if you want).

Switch the bass / treble is very small and quite annoying to operate the foot, but you get done.

The hatch for the battery is super easy to open ... maybe too much, I'm afraid to end up losing it.

Only real problem: the axis of the pedal squeaks! A large volume can be heard but not low it gets a bit exasperating at times ... That said I think this is a recurring problem on the wah, quite logically. (Edit: in the meantime, the squealing stopped ... TFWP time it is done?)

8 again, nothing exceptional, but everything works well.

The effect, well ... It's been wahwah what. Wah is a relatively quiet, not screaming like a Crybaby. The sound can be mild or somewhat psychedelic, almost hendrixien, but preferably on a clear sound. In disto I find it tends to be too quiet (on a big distortion) or to rot in the ears while making his acute and distorted (a bit of a distortion acid). She does better in overdrive.

The switch, effective enough, to adapt the effect to your guitar, amp and set to the song you play. Too bad it is not practical to operate more playing!

Finally, no true bypass, it colors the sound so slightly when it is off by cutting the bass and treble. It is better to connect it only when it will be used.

I put another 8: it is fine for what I do (psychedelic sounds too aggressive in its clear) but will not suit everyone. And lack true bypass ...

I have for several months, and I use to play bluesy psychedelic stuff with a quarter of a drum and a Vox AD30VT. Before I had a Crybaby, but I had to sell it due to as ... more and when I got back I came across this one on ebay at a ridiculous price and I color.

It's supposed to be a foot manufacturing more or less traditional (Czech Republic), but in the end we get just a good product without a big failure or extraordinary quality. I do not know how much it costs new (or even if you can find it) but on occasion the unknown brand of all gives a very favorable side, especially compared with weak prices for most Wahs.

And let's not forget his main and great quality: it is PINK! Too cool!

With the experience I would do probably the choice ... Unless I come across better cheap. Finally assuming that I found one, and it is not won.