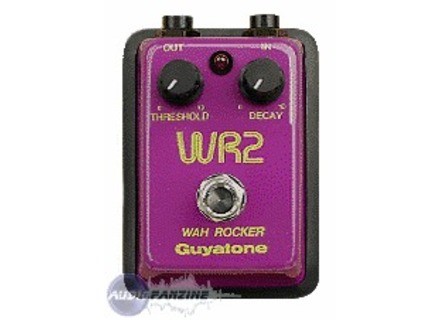 Slim_herve's review (This content has been automatically translated from French)

Guyatone WR-2 Wah Rocker
5
This is an automatic wha wha, who Ragit therefore the dynamics of the game, basically the more you attack stronger the effect is more effective.
Trs is small, so it's quite convenient. In addition CHAC battery is super simple, no need to screw or clamp.

Exceptional simplicity, one In, one Out, two rglages:
- Acting on the threshold sensitivity of the effect: rgl mini must hit like a deaf man to act as the effect, the maximum ben the opposite!
- Decay that affects the duration of the effect: the effect is the mini dry trs, trs wha a rapid, max is the opposite what!

This is the very first time I use an auto-wha as effective and easy rgler. In fact nothing rgler yammer, you plug and it works!
Super's perspective, not too sharp rises in the end, not too serious at the bottom, fabulous!

I have used for many years self-wha Boss, who is a true galre rgler, and I must acknowledge that I fell on my ass, the Plug and Play just!
Report quality / price amazing addition: approximately 80 € against € 140 for the Boss
With the exprience, I would do well Obviously this choice!
Did you find this review helpful?yesno
»

Spawn-X's review (This content has been automatically translated from French)

Guyatone WR-2 Wah Rocker
5
Well, first of rtablissont vrit THIS IS ABSOLUTELY NOT A SELF-WHA as saying the two previous ones included in the notice.
This effect was also common with a wha the name.
It is indeed a "Envelop Filter" which is not quite the thing m ^ m. And If you are not with me, ask him Stevie Salas m ^ m since it is from his own mouth that I want the info.
Long before to buy this here about 7 years (97), I had indeed met at a guitar clinic-Nancy ended late at night around a bottle of tequila (Salas drinks only a; op).
More in tt night, as I looked after the technical scne, it allowed me to test my m ^ m its effects, and among them was a prototype all purple to Reduces more than one size. I then question and he told me it was the fact that he had used the piece on Anne prcedente Tell Your Story Walking on the album ColorCode (This album was also another title because the title is ColorCode t given the Europen version, but I can not remember the title he gave me).
APRs have switched my turn, I m'cris "Ho yes, This Is An Auto-Wha!"
And he, two fingers annoyed me as dry rtorque: "No no no guy, it Is An enveloping Filter analog synthesizer like in a year!"
- "Oops, sorry ..."
In fact he explained to me more and that his intention with dtail Guyatone silent CRER of a malfunction that Envelop-Filter naturellemet Offir and a random image curve varying increments in short, anything but a self- wha traditional which is expected most of the time it behaves fairly linear fawn.
It nevertheless remains that the ear, I agree, looks like a strictly self-wha, but who cares, the sound captured Me with

Anyway, buy this especially not without testing the Prior. Indeed, rglages Gaux, it does not Ragit m ^ m of the fawn of a guitar the other.
One of the things I prfre with WR2 (the official name of the first model released in Japan directly Stevie Salas silent Wha-Rocker), it put me in a crunch grow well on amp and modulate the effect more or less depending on SETTING THE my volume knob on the guitar.
Wouahouw! Add a one octave and one octave Whammy, possibly a lightweight phaser slow, and you will get the biggest guitar sound funk-rock/machine big riff that has invented Fast Fashion.
10 without a shadow of a shade or hsitation.
Quite simply, this is one of my favorite pedals for those 5 or 6 years that I dernires RSDLP in my head with the trio Whammy, and 535Q (also used by Salas). With the subsidiary up for my MicroSynthesizer Electro-Harmonix! YUM!!

I dj lach part of the first paragraph, but I can add that my license couraging the sound of Indian similisitar tandm with rgl Delay 99% of feedback to March 4 ms seconds behind

To be used sparingly and with rglages with onions; op
The only minor default that I found is its lack of a switch that would have reversed the polarity of the effect. Indeed, the curve will not be as acute as the grave to laugh a little, it would be cool to be able t do the opposite, c - d of the acute to the grve.
M'fin, it's really no big deal as default; op
And then, if m ^ m a sound not quite as well, I russi reproduce this with my MicroSynthesizer opposite effect, so ...

Effective?? C't'un euphmisme; op is as sharp as a razor; o))
Obviously, it is based on using EQ on the amp, but frankly, for those looking for really funky effects, dive, you will be delighted.
For information, take a look at video and MP3 of the official website of Stevie Salas, we hear other sound in the butcher m ^ m kind and among them, WR2 is not trangre ( http: / / www.steviesalas.com/ ( http://www.steviesalas.com/ ) ) ...
No comment! , Op

- With the exprience, you do again this choice? ...
- The question does not m ^ m! It is permanently connected via my Panou power, I used all the time, m ^ m for my classes to explain my groove lves.
It's a neutron bomb: as compact as effective!