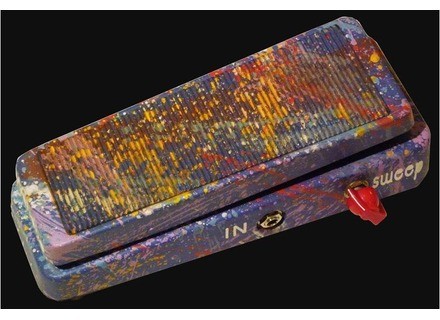 ENG152's review (This content has been automatically translated from French)"Vintage and furious!"

Jam Pedals Wahcko
5
JAM is WAHCKO pedal "Boutique" that exists in two versions: WAHCKO and WAHCKO more. The newer version has a rotocontacteur that lets you change the sweep. There is also an option "Seagull" that can reverse the outputs of the device through a button and so will play Gilmour making noises of seagulls ... Mine is a simple WAHCKO that j &#39;now used for six months. I always make a point of honor to wait a few months before issuing an opinion.

The Wahcko is a basic Wah outwardly similar to VOX V846 HW that I have too. The latter being far my yardstick, I often liken the two bugs during this review.

As manufactured by JAM Wahckos pedals, each is unique and has therefore its own finish. When I got mine, it was so ugly (see photos) that I almost return to the office. After placing it between my guitar and my amp, I was not as adamant. I ended up redoing the decor myself and I am now fully satisfied. It is almost impossible to test for someone like me who lives in Ontario. I will try to be as accurate as possible.

The wahcko comes in a white cardboard box stamped "JAM" with a map of the workshop, a brief user manual, allen key, a pick and a JAM Cases psychedelic fabric with pink flowers. printing quality is very good. The typical decoration "Japanese brothel" with small flowers and gluing rhinestones on a beige background and salmon was just disgusting, not in its execution, but in the inspiration of the artist who was more bloody sign his work ... I know that the important thing is the sound, but there all the same! I contacted JAM who asked me to send them the pedal so they sent me another ... I did not in the end although it was lovely ... This has not Wah not hatch for battery, so we must open to set up the stack. Unlike V4846HW VOX can be powered by AC adapter 9v. Activation turns on a small LED on the front, which is handy! the strength of the balance can be adjusted! the solid feel is excellent.

Inside there is an inductor and components FASEL RED fly high (Carbon Comp / Tropical Fish). It is not handwired, but it is TRUE BYPASS. Finally, there is an internal trimpot to adjust the level which means that wha has a boost, which is handy.

Once the stack implementation and the level set (in my case, I put at least that prevents me from having a change of volume activation), wha this is used as any what wah. The switch is not sensitive with respect to a cry baby: no chance / off inadvertently during the game: you have to press the trigger for frankly. It&#39;s even closer to the VOX V846HW. The pendulum stroke, however, is longer: for once we are closer to a REAL McCOY.

a word about the connection? the jacks are of excellent quality.

Unlike Real McCoy is not "FuzzFriendly" and my FUZZFACE does not mix with it if we glue output Wah.

Details immediately: Hype and disabled, there is no loss / coloring of the sound: it is perfectly transparent: a True Bypass!

Its clear a lot less polished than the V846, it shows, however, extremely responsive, voice, suave expressive. I struggled at first, as the length of the race involves excellent control movements of the pendulum. Once mastered, I can send a thousand subtlety. The voice of this beast that is not as clear as the VOX, but a little hoarse. It goes down much lower in the bass and rides a little higher in the treble. inclined to the maximum forward balance, it does not break the ears and is very musical. this is a good job. We can all play with, but I think it keeps a very manly side. It&#39;s all warm and Vintage case.

Saturated sounds: Still very vocal and expressive with a crunch or overdrive, it allows my guitar to sing so very pleasant. There is no problem finding the "Sweet Spot" which is huge! This is where she really takes advantage of the VOX showing more character. An expressive game will be better developed, this wha being more quick to show its teeth. Maybe this is the FASEL RED? Distortion even in Hi-gain, it is downright imperial and dropped completely VOX. Angry, it can make a crazy guitar making her scream without you destroy eardrums. In the hi-gain register, it is much better than my EVH Wah. This is a great job.

I&#39;ve had six months and many other Wahs me seem to face off this one!

I had four wahs before and I&#39;ve tested a few (among which almost all Dunlop - except the buddy guy, the Slash, the Clyde McCoy and Jerry Cantrell- all new VOX -including Vintages- and a pair of Morley - I do not like all-). I have not tried the RMC picture wah. Another RMC briefly tried (which ???) I looked very good too. I did not like the Fulltone Clyde standard that seems a notch below the VOX V846HW.

Its strengths are its LED operation, the boost that we rule and then forget it, its custom finish his TRUE BYPASS, excellent manufacturing quality.

What I like most is its simplicity: no gadgets: just a great wah with an angry sound, inspiring, warm and genuine. I do not know if WAHCKO JAM is the best wah I&#39;ve played, but it&#39;s my favorite in all cases. I also have a delay of at JAM, the DELAY LLAMA which is also excellent. I will eventually consider me seriously on these people because it is clear that their material sounds damn good ...

Enclosed are some pictures: In the original dress, posing near the VOX V846, and in her new dress homemade ...

Stratophil's review (This content has been automatically translated from French)" The class!"

Excellent sound quality, no breath, voicing very subtle, almost human (thank you to the components of choice, Tropical Fish and Red Fasel).
This is the wah in the pure state.
The knob 6 positions to choose the modulation frequency range: All are usable for many different styles. Personally, it is locked in position 3, which suits me perfectly.