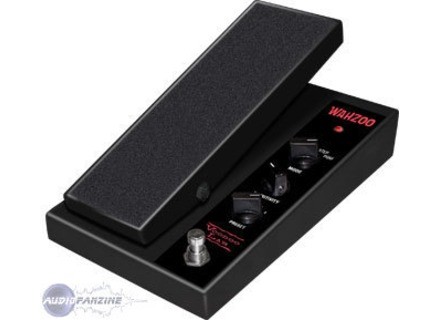 loudfunk's review"Finally a new wah that sounds like an old one..."

Voodoo Lab Wahzoo
5
The Voodoo Lab Wahzoo is one of those products that does a few things and does it exceedingly well. It's a vintage sounding wah pedal on one setting, and auto wah on the next and a programmable step filter on the third setting.
It has 1/4 inch jacks for in and out as well as one for a tap tempo switch. Also it is powered via external supply only.
On top of the pedal you have the auto wah sensitivity switch, step filter selector for 4 presets. And the on/off stomp switch.

The wah and auto wah mode are obvious enough. For the Step filter the manual explains how to program and store your own presets in easy steps.

In wah mode it sounds very much like the real McCoy (pun intended). Unlike other current productions I tried that claim to faithfully recreated a Clyde wah this one actually does sound like one with all the vocal qualities associated with it.
For 70s Funk stuff the auto-wah is what the doctor ordered, it bubbles, it percolates and best of all depending on the setting of the pedal you can reverse the starting point, i.e. have the signal's filter envelope go up or down

For the ultimate in fun use the Step filter. Here you can program up to 30 steps of a sequential on/off type of sequencer sound. Those then can be stored in one of 4 presets.The pedal will be your tempo control, for more exact tempo needs you can attach a tap tempo switch to the pedal which for me was a must have.

Even when I use a rack set-up with nothing in the front of the stage than a midi switcher and continuos controllers, this is the only pedal that I will put down because I have not heard anything that does what the Wahzoo does as convincing.
The only down side it can think of s that it doesn't run on batteries, but since most folks likely will put it on thei pedal board and running it from their power supply brik that is a very small niggle.

Voodoo Lab Wahzoo
5
Here is a rare wah, which is unfortunate.

The big plus of this mode is the wah wah sequential memory, to my knowledge only Zvex also.

The build quality and finish is exemplary.

First point: the switch on / bypass is arranged on the side and not on the scale. Not always practical, but this is due to the presence of auto-wah wah and that can be sequentially activated and without touching the switch.
Second point: it is possible to add two external switch to control the tap tempo switch or sequential wah wah of the classic auto-wah wah or sequentially. This is well thought out and very practical ... but optional! The Boss FS-6 is recommended, but it will still add the 60 euros!

For the rest of this pedal is very easy to use: in auto-wah, the switch controls the inverter filter, wah sequential mode, the switch changes the tempo in real time.

The scale is accurate, sensitive and progressive.

The sound quality is superb.
The Wah is based on the classic Vox Clyde McCoy (as almost all Wahs ...). Quality is at the appointment.
The auto-wah is in the same vein and the inverter at the foot of filter available is very effective.

But the real highlight of this wah is sequential: it involves tremolo and wah. It allows moving from one band-pass filter to another with a tremolo effect. All combinations are possible and very easy to program with the added ability to store 4 different settings. The external tap tempo determines the global tempo, which can then edit in real time accurately and with the progressive tilt: effects spectacular, the slow wah-wah tremolo ground in rage.

The external switch can also instantly switch to the classic wah wah in sequential or self-wah.
What more?

A great wah wah equipped with a highly effective sequence. A must-wah.
Only competitor: the Zvex Ooh Wah 2, but less convenient to use, less versatile and more expensive (okay there are two pedals offer somewhat different results: the Voodoo Lab is more versatile and easy to use but Zvex is a true factory Wahs sequential).

This pedal is a marvel.

mchiphopotamus's review (This content has been automatically translated from French)

Autowah mode is bluffing. For comparison, the Zvex Ooh Wah I and I prefer the Voodoo Lab Wahzoo on this point. Less possibility but its warmer, thinner ... The speed of the Wah depends on how the pedal is pressed (faster or slower as you lift your foot).

Mode "step wha" is a gem. In short: you activate the sequencer by going to "create step" (knob pushed far right), you save successively all levels that you want to store by typing on the switch (position 1 desired - I support / j ' records - 2 position desired - I support / etc ... I record can be repeated 28 times!), you switch back to Step Wah. And then, the Wahzoo restores your programming. Depending on whether the pedal is more or less relieved, delivered programming is more or less quickly.

The wheel has 4 Step Sequence sequences pre-recorded (also very good and perfectly reusable in a song. What is quite rare to be stressed ...). Still, once each sequence can be delivered more or less quickly depending on the position of the wah (more or less depressed.

The knob "autowah meaning" to adjust the sensitivity (more or less pronounced wah) of autowah.

-1 To swith off the wah and not above. Very useful for programming sequence. Much less when using the wah ... Voodoo Lab should think about putting two switches: one for the prog side of the pedal and one under the pedal to activate the mode wahwah.

The best wah I've had by far. Stupidly, at first I wanted a pedal vintage. Because it feels good ...
I have a Vow Clyde McCoy, a Fulltone Clyde wah and an Ernie Ball. Nothing comes close to the Voodoo lab. It is very versatile. The curve is very gradual and sensitive, the sound very soft and subtle.
Basically, it goes clear to play funk and saturated to play Hendrix, from Alice in Chains, Tool of ... Strangely, this is neither modern nor wha vintage. She does both brilliantly.

Pedal pretty hard to find and quite expensive but definitely worth the shot. Great sound quality, a warm, round, soft and subtle and not intended for exclusive use. High quality versatile pedal.

I tried this pedal for over four months. And I know why I persisted. It offers more possibilities than its competitors without sacrificing sound quality.
Sounds as though a Fulltone Clyde McCoy better than Vox (do not worry about having one: it responds poorly, the curve is too fast and it's not at all versatile, they are heavy and is ugly, it generates a lot of breath, the food signal. In short, I bought blindly following the advice and demos Audiofanzine youtube and I did not like. surcotée Definitely. Probably because the appellation vintage that attracts the barges that we are)
So yes I would do this choice without hesitation. I'm going even further: I can not conceive of taking another (well apart from Fulltone is frankly good and ernie ball that offers unbeatable value for money and has a super hot her to fall also.
But Wahzoo is better