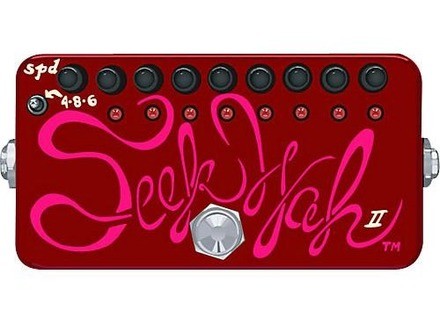 Zvex Seek Wah II
4
In traditional ZVEX style this is a simple looking little analog box that makes some wild sounds. It has a standard 1/4" input and 1/4" output and one single stomp switch.
There is one knob to adjust the speed and eight to control the sweep of the steps.
Think of the different sounds you can get out of the sweep of a wah pedal, now imagine those sounds as stuck positions that can be stepped through instead of swept through. It is similar to the sound of a sample and hold pedal but with a bit more control.
There is also a switch to select how many of the steps (4/6/8)the pedal will go through. I found the 6 setting very useful when playing in odd times

Setting up is easy but like all ZVEX pedals it will take some experimenting to get the sound you want. The manual gives a quick run down of how it works and what to expect.

I mainly used this in a guitar set up but had equal success using it as a sound manipulator on everything from drum loops to vocals. There is no preamp and the pedal itself is has true bypass so it does not altar your tone until it's active. I mostly kept the speed slow and tried to match the tempo of the tune I was working on. This can be a bit difficult with how much range is on the little speed knob but once you get it right it adds great textures to otherwise normal sounds. On guitar I liked the effect to be very present to get that classic sample and hold type sound. I got the most out of it by placing it after an overdrive or distortion. This gives the pedal more sound to alter and really makes it jump out.
On vocals and drum loops I found it much more useable by blending it in to give the sounds some depth without completely filtering them. Faster speeds can be useful too but they make it more of a one time use effect.

What I liked most about this pedal was the odd sounds you can get. The knobs are tiny with a wide range and unless you plan on writing all the settings down it's very difficult to repeat the same sound twice. This can be great in the studio where experimenting is caught on tape but I just never found it too practical live. It is also quite expensive for something you may not use too often. Cusack has a tap tempo mod that I always wanted to try because I think being able to quickly get that tempo right would make this much more practical. I never got it done because I eventually bought a Moog murf. The Murf is not identical but it's close enough that I did not feel the need to have both and the murf is far more flexible.
Did you find this review helpful?yesno
»

piotr213's review (This content has been automatically translated from French)

Zvex Seek Wah II
4
Great product. Its like all the product Jumbo Zvex.

Definitely the best sound for an auto wah on the market. The quality of the filter is amazing.

I use it for 9 months. nothing to say