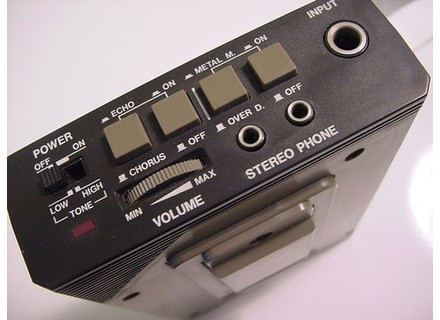 Arion HW-02 Hot Watt 2
4
I was just getting ready to build something to combine the signals from a guitar and MP3 player through headphones for practicing leads before gigs when I found this little gem at Goodwill for $3 (THE place for pro audio gear!).

Firstly, it still works fine after being used, abused then probably neglected for years which says something about the overall electronic design (very good). It is fairly old school technology with what appears to be NO digital crap since it uses actual switches instead of buttons. The MP3 input has much less gain to compensate for the MP3 player's headphone amplifier, and the abiity to mix the guitar with program material is excellent. Plenty of volume with 2 selectable tone settings on the guitar input; control the MP3 volume from the MP3 player.

The built-in effects are a very nice bonus, though the distortion doesn't have nearly enough compression which makes every note "bang" annoyingly. But this is actually a good thing as it's more difficult to play fast lead runs with the extra dynamic range since the notes don't sound as liquid. Thus, you can hit the stage and really cook after practicing the licks through this thing beforehand.

Two distortion settings: One is a super-harsh, very out-front earthquake heavy on the high mids and very aggressive; the other is a more subdued fat sound, more Metallica-like. Both settings allow a little clean pick attack through, but using the chorus or echo along with it smooths things out pretty nicely.

The echo, being a mix of 3 or 4 different slapback times (the longest being only about 100 ms) is great for adding needed body, but in no way simulates either reverb or echo except for a very fast gated reverb. The chorus sounds surprisingly good for a little plastic unit, but nothing coming out of this box is something you'd feed into a stage amp or studio mixer. You can't use the chorus and echo at the same time, but the buildup of cheap sound quality might make that impractical anyway. I mean, we're talking about a $30 box here.

This is basically an extremely reliable little unit that can be adjusted to sound tolerable and get the job done. Given a choice, I will definitely continue to use YouTube and a favorite small amp. But after smashing my fingers setting up, my usual nap at age 54 and the greasy burger I barely had time to grab, this cool box will be great at helping me get into the mood. Like most music gear, you can really depend on it and even the headphone and MP3 input jacks are very high quality and were not the least bit scratchy.

Thus, it's actually better as a professional practice device than something to have fun with jamming to favorite CD's, but it's certainly also good enough for that. I admit that I like much more gain and compression than most other guitarists at times, so I doubt that most others would find the distortion objectionable. I know I slammed this poor thing pretty hard, but I can also say that I would have paid a lot more than $30 for it after using and hearing it.