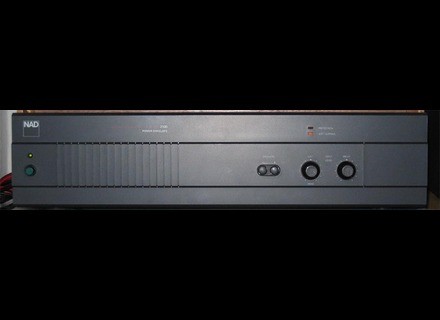 pixelikos's review (This content has been automatically translated from French)

Nad 2100
Good amp, the meuilleur I had classic amp home studio,
used directly on the map Waveterminal without preamp.

Its precise and neutral, provided you have good speakers (I had two voices with 20cm DAVIS)

the advantage is that it has two knob to adjust the volume,
even if the optimun setting is in the middle (there is a notch on the knob to mark the position)

Attention to the state of knobs and relay start inside, because on both Nad 2100 I had there was the cracking or loss of volume at a low level because of that.

I changed to a T-amp amplifier class D which consumes much less, take 20 times less space, and a more accurate sound, if it is well fed

MontFaucon's review (This content has been automatically translated from French)

Nad 2100
5
I use this set for several years: a friend used it with Cerwin Vega (4 satellites and 2 boxes one of which could serve as a trailer!) We believe in a real nightclub. In addition to the physical power which sometimes took this plexus is also the presence of instruments and channels in the room that I decided to buy him! An ideal compromise between sound power and natural transcription.

I associated with Mulidines, audio systems, as well as JM Lab with wiring and tweeters are changed. Whatever the impedance found the presence, physical and palpable nuances of the music!

The design is uncompromising: 4 10000 uf capacitors (amps RMS 200W displaying sometimes do not have this reserve of energy or the colossal power). Power announced by the manufacturer may be compared to that of Vintages Marantz Kenwood, Sansui the big time ...

The prémpli in turn provides a silent operation fabulous (something that was bound to Vintages whatever brand) and even has a phono MM & MC remarkably effective: I have used with cells Rega and Denon.

Stamps perfect, breathtaking dynamics, transparency, neutrality, quiet operation and reliability are the hallmarks of this set that we can afford for a fairly modest sum. It was certainly more aesthetically refined but never Nad looked for my face!