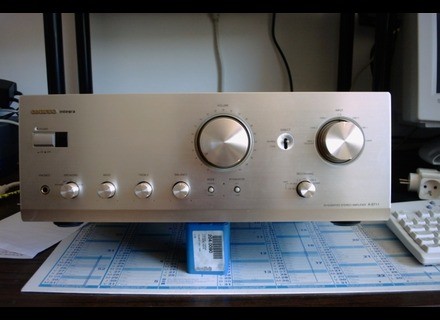 Onkyo Integra A-9711
4
I have used the 9711 together with Quadral Amun VI (Phonologue) speakers. Overall good sound, especially the lows and the mids are excellent. The highs are also good, but transients sound a bit 'rounded'. I have put a lot of effort in improving transient behaviour.

In my tuning and listening trials I finally settled with Van den Hul TEATRACK HYBRID ( http://www.vandenhul.com/p_C26.aspx ) for the speaker cables and Nordost flatline interconnects. This improved transient response and made instrument position much better.

I encountered the same problem with the degradation of one channel as described in the previous review. In my case it was the right channel. I replaced the volume control circuitry and the input selection circuitry, but without succes. Than I found a service manual for the 9711 and tried the prescribed adjustification of the bias current setting. That did the trick, both channels are working well again.

- What thing do you like most/least about it?
It looks great, it's heavy (15kg), it has a huge volume knob, it sounds pretty damn good (check out the specs!), it's dynamic, it's got loads of inputs (3 tape loops + 4 more aux), motorized volume & source knobs so you can change via the remote, 4 speakers outs, direct mode, 20dB attenuator for more precise volume setting.
This amp is ZERO HISS. Yes, even at MAX volume. In fact, there is less hiss on 10 than there is on 7.

The only improvements i could think of would be to let you use the headphone out while the speakers are on...and to have a 3 or 5 band EQ. Although it must be said the 2 band EQ does its job musically.

- Did you try many other models before getting this one?
A few, yes, mainly very old or cheap ones. There is simply no comparison: this is by far the best i've ever tried. The no hiss 'feature' is the most appreciated.
I bought this after reading a big comparison review between this and some amps that were 5 times the price. On paper, this was almost the best.

Problem is that after a year or so, one side started 'going'. I still have the problem to this day: what happens is that, at low volume, one side disappears and you need to fiddle the source selector or turn up the volume abruptly to make sound return. Turn it down again and all is fine until you change source or switch off. It sounds like it's just some dust somewhere but could be something more serious like cracked solderings maybe?
After about 5 years of use, the fuse blew. Possibly due to overheating (i had loads of stuff stacked over it). Cost 55 € to fix (£30) and they soldered up some bits that had cracked because of the heat. The technician told me it was unlikely the problem would ever occur again, so i'm not too worried.

All in all, despite these minor problems, i think this amp is a very good one.

Beware the black model has a PLASTIC front (yuck!) so make sure you get the silver one, which is brushed aluminium and has that indestructible feel to it.

RickD's review (This content has been automatically translated from French)

Onkyo Integra A-9711
5
I use it every day for about 6 or 7 years.
I have chosen after a comparison in a magazine for audiophiles.
The price was reasonable compared to other amps, especially on the paper were the characteristics of hell. The rise time of the beast is comparable to the best, the signal / noise ratio too, and it has an impressive number of entries: 3 / O "Tape", which is very rare, and a bunch of other line inputs, including a live gold connectors for the CD.
The EQ has two bands but effective and musical. It is also detachable. A single button and a -20 dB pad complete the whole. Function mutes the headset to the pairs of speakers, it is possible to hear separately or in combination: A or B or A + B. I take off 1 point because sometimes listen with headphones at the same time as speaker would have been useful in my home studio, but it's a detail.
I take off 1 point because I also had a minor technical problem with: after a year or so, one side started to function less well. Crackling sound or cut altogether, forced back the sound of a sharp blow to unlock. Painful. One day the amp cut flatly turned back and did more: the fuse had blown. The repair cost me € 53 (nothing compared to the original price € 680 recommended) and was told it was a ventilation problem: the amp was heated and welds were released. Well ventilated, the beast is built to last. Weighing about 15 kilos, separate compartments inside ... designed as seriously as his head: a retro face that I love.

The sound is impeccable: it does not blow, even at maximum 80W RMS, ear pressed to the tweeter. Nothing. It blows a little two-thirds, however, but almost nothing.

The remote control lets you change the source and volume, the latter being powered.

Except for its weight and size, this amp is top notch. Super face, its perfect, never tiring, yet lively.
I have no reason to regret this purchase, on the contrary.

The only real downside of the beast is due to its terminals, all plastic and not very reassuring, they are in stark contrast with the solidity of the rest.

Patrice28's review (This content has been automatically translated from French)" Price performance. on top!"

Onkyo Integra A-9711
4
Used for 12 years. He succeeded a Harman Kardon A402 to power Ditton 66 at the time and the B & W DM605-S2 now. Amp strong enough, good sound, well built, good finish. Only the terminals that are a little "light". Very good price / quality ratio. I would have preferred a more robust amplifier for Ditton, but this one has fared well. I would do this choice! At present, only findable occasion.
Did you find this review helpful?yesno
»