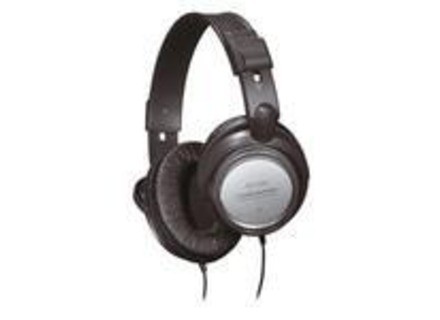 Anonymous 's review"I got these for free. Thank goodness."

Audio-Technica ATH-T44
4
The Audio-Techinca ATH-T44 are not so much a bad pair of headphones. It's just that they're not particularly good.

I'll begin with the kicker. Everyone knows (or should know) about the phenomenon where completely new headphones have to be driven for a few hours before they've broken their sterile "new headphone" mold. I got these Audio-Technica ATH-T44's for free with a bundle I purchased, and they haven't been bad as a backup pair of headphones. But here's the kicker:

That "breaking in" period that headphones need to go through? I've used these for hours and hours and hours, with them being plugged into the computer and having sound run through them even though I was wearing my trusty Sony MDR7506's. My fellow recording friend put them on and I didn't say anything. He turned to me with an inquisitive look in his eye and asked:

"Are these brand new?"

These headphones weren't just "not broken in." They are sterile, distant sounding headphones. When I listen to things through them, they obviously sound a lot better than your typical person will have. This is a fact. And the truth is, considering their price-point, they're unbelievable value for what the consumer needs. When you think about it, a consumer who wants quality headphones will spend several tens of dollars more to get a nice pair of headphones or earbuds if they really want them. These sound just as good, if not a bit empty. At the price point consumers are willing spend on headphones though (I'm talking to you, dr. dre) you start to wonder how silly everyone is when it comes to the market. I maintain that my Sony MDR7506's sound better than any dr. dre set of headphones, and they certainly sound better than the ATH-T44's.

So, as much as I want to call these very bad studio headphones (which they are), I simply cannot ignore the fact that I would LOVE it if consumers decided to spend their money on one of these instead of something more arbitrarily expensive.

The get back to the Audio-Technica ATH-T44's though, I find them to be quite strange to feel. They feel sterile like they sound sterile. It's not that they seem cheap. It's more of a strange soullessness these headphones emanate. I'll stick with my warm, toasty, sweaty studio cans, thanks.

But I will give this four stars, simply because it targets a "consumer" market, and offers more at that price point that most other consumer-grade brands.
Did you find this review helpful?yesno
»

AlfredM's review (This content has been automatically translated from French)

Firstly, I never got used for listening to music or play games, so for ordinary use and non-professional but:

I love the sound quality restitution good range frequency drives, solid bass is clean and pleasant.
I am less comfortable APRS hours of gaming, the plastic can be felt (if you've got dreadlocks, it's good)

I REU, bundled Thomann, headphone first prize in t.bone (HD-790), and the Audio Technica is well above the shot I'm using it.

Report qualitprix very good since I had bought 40th, and for that price it has for its money, not the impression of being robbed!

I would do this either with the experience, without problem. Moreover, both very happy with this brand, I intend to invest in a high-end Audio Technica for use in mixing studio.
Did you find this review helpful?yesno
»