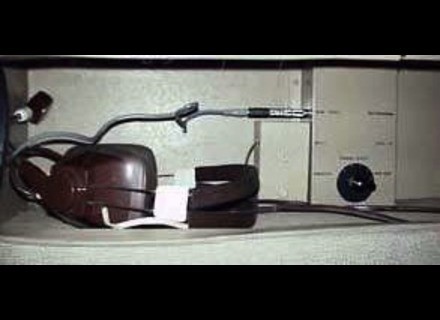 Wurlitzer 131 Headphones
4
The Wurlitzer Model 131 Headphones are a set cans that come with the Wurlitzer 206 electric piano, which is a student model. The headphones are originally intended for use with the 206 inside classrooms where it may be necessary for the students to be wearing headphones. The studio that I work at has a Wurlitzer 206 and the headphones to match. Usually we don't use the 131 Headphones with the 206, but sometimes they do get used together. Most of the time we have the 131's around as an extra set of headphones. They are pretty bulky headphones and actually have a built in microphone mouthpiece as well, although I haven't ever used this part of the headphones. I believe it has a 1/4" jack on the end of it for plugging directly into the 206. These aren't the most comfortable headphones in the world, as the ear pieces cup around your ears entirely. It's really not too bad, but I've certainly worn more comfortable headphones in the past. However, this does help to keep the sound from coming out, making them good for monitoring during recording if you're having trouble with headphone bleed. As far as sound is concerned, they're about average as I don't find anything too special about them. I don't know if they designed them with keeping in mind they may be used outside of use with the 206, but I would think not. You won't be able to find a set of the 131's for sale on their own anywhere, as it would be hard enough to find a 206 electric piano that still had the headphones with them. Having said this, if you do get or have a 206, the 131's will work well with them and beyond, but they're best suited as an extra set of headphones rather than your main pair...
Did you find this review helpful?yesno
»