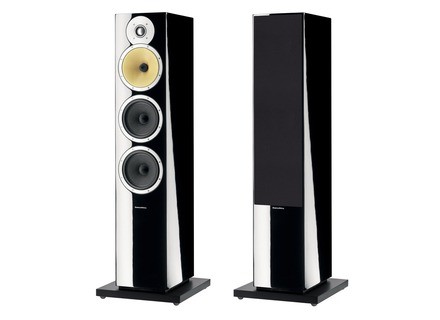 B&W CM9
4
Being in Berlin next visit, I have not missed the various music stores and hifi. Bower & Wilkins is this before me in a small neighborhood shop. All connected to a Naim SuperNait which I will post the test in parallel.

Despite the lack of advance notice. It is not my first encounter with the little English and integrated I could take a step back on listening.

If I come to talk about finishing, I can say it is very spectacular. In fact, the best term would be that it "is forgotten." Terminology unflattering to the century of bling bling, but it's simple, fairly well finished without any particular point to relate. We are not in the register of beautiful divas overbuilt the top of the segment, but still, we no longer mind cheap registry entry. Veneers are correct, a little less sensitive than the most sensitive of the lot, but will still be gaffer.

At the visual level, Madame throws if you'll pardon the expression. The two big hp's grave and the midrange HP announced its yellow livery difference.

It's time to plug it on a terminal that I look good, supporting the bi-wiring, and go.

The beginning of the test is performed with the last album of Mumford & Sons. On this record, personally I would call huge and I know by heart, I expect the B & W at the turn. But it is clear that it is doing totally fine. It transmits much energy, is particularly at ease when it features the percussion (sticks well to the source), it has performed rather tidy and very detailed, rather than melodic and fluid. Of course, there is a large reserve in the rhythm, but it's not the point where it wants to give its maximum. A perfect location of every detail seems, however, be his forte. The speaker did not like especially when I got up and walked into the room. The sound volume was very low tendency to lose slightly raised. But already at a low to medium volume, the sound is good. I have not experienced the high levels. The sound of the tweeter is under control although I regret a little bit of openness and detail in this frequency. This is not necessarily its biggest asset.

The second test piece, Hotel California live, I saw very good results on the drums and the singer's voice, however, probably due to the Naim, perfectly at ease in these records. A slight restraint in the acute and medium prevented me, however, give the word "absolute realism" to this combination. Missing, again, one last bit of openness and that little feeling of something which we can reach out and touch her. But it was not very far either.

As for the price. I found the note of 4000 euros and some fairly salty. Especially since the competition is tough in this sector. But I could see this model to 2,500 euros a pair, new on the net. I think the salesman thought he had a pigeon to pluck. Too bad, it will not be me and suddenly, -1 for the service.

So overall, I'm happy with the BW. But take my opinion with a grain of salt, because I started my career and I still hifi many many hours of testing ahead of me before they can be absolutely sure of what I said (as I am in guitar / amp p.exe). You have to see me as a first draft.
Did you find this review helpful?yesno
»