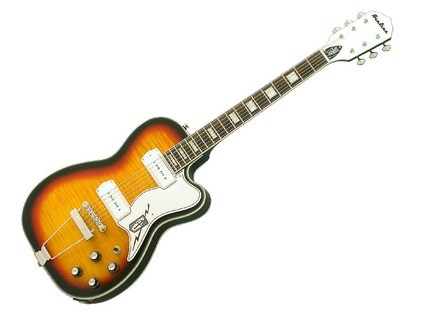 Airline Tuxedo
4
The Eastwood Tuxedo is a very interesting guitar. Modeled after the Barney Kessel model guitar from the 50's, the Tuxedo has style for days. Features include A hollow maple body with mahogany sides, a set maple neck, and a rosewood finger board. The guitar comes equipped with two custom wound P90s, les paul style volume and tone configuration, and a tune-o-matic bridge with a trapeze end piece to boot. I really dig the contrasting black and white theme and the coat of arms on the pick guard definitely lends to it's sense of class.

The hollow body makes for a different sort of sound and the p90s are wound hot enough to handle even high gain material --without soundy muddy or taking a hit in the clarity department. Tuning stability on the Tuxedo was decently strong. The neck shape was beefy enough to make transitioning from my typical gibson variety guitar very easy. This allows you to use the Tuxedo as a second guitar on stage, capable of getting a specific sound without fear of an awkward transition with the rest of the set's material.

I played the Tuxedo through a Bad Cat Hot Cat 30 combo and a Fastback 18 head+cab. No pedals.

Through the Bad Cat, the Tuxedo sounded marvelous. It carried no boundaries that it's appearance or feature set may have initially entailed. Yes, the cleans sound lush and soulful, but what really got me excited about the Eastwood is how is responded to gain. With a standard british rock sound from the Fastback, I was able to cop classic rock sounds perfectly. Dialing in high gain on the Bad Cat I was able to get some Baroness riffs out without any problem. The guitar has a very specific sound to it, maintaining the clarity and jangle of a single coil guitar while sounding full and percussive at time. Not as much unwanted feedback as I expected either.

The Eastwood Tuxedo is a unique offering with no real competition to speak of. The guitar is a novelty, as is most of the guitars in the Eastwood lineup. If you want a hollowed out, P90 driven, 50's, classy, clean as a bell but willing to get dirty guitar, look no further. The guitar fetches $879 new, but there are deals to be had.
Did you find this review helpful?yesno
»

See all 72 photos of Airline Tuxedo »

View all 9 videos of Airline Tuxedo »