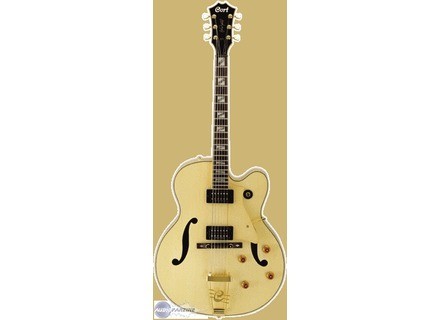 smoothlick's review (This content has been automatically translated from French)" great!"

guitar very well known and yet to rival the best!

Hpruvot's review (This content has been automatically translated from French)

-The number of frets? I confess not to have counted: Rhythmic playing rather, access to extremely serious matter to me at least, that said, I sometimes make deals until the 18th position with no problem ... making me very small fingers!

-What are the settings? 2 volumes, 2 tones, one for each microphone and 3-position selector. The two pickups are Seymour Duncan. The sound palette is quite broad. For my part I use the guitar for the country and some blues fat enough. I've even explore directories Pop Rock with happiness and of course jazz. I repeat the branch of a pedal and a Boss ME 30 Tube Preamp Hughes and Kettner (Tube man first generation) to directly attack the mixer. I sometimes have some losses but sound comes from the lamp of the preamp which is to change (not easy to achieve it says on the tube man). Otherwise, whatever the style, I get the sound. Stage I of the branch on a Camel Carlton via my pedals, then there is no picture: wonder of wonders! In home studio (VS xpended 1680), the branch I live through the effects of cards (with amp simulations): the always ON.

I have the guitar with a sensor control noon for a Roland GR 30: No problem.

-What type of race? I find it quite EPAI, but it is well suited to the purpose of the guitar, jazz: the Demanche and fast scales are going wonderfully. It is mounted in cords of 52-thread flat, which is good for glissendi and sounds very round, but the downside is fatigue in the locked position or extended agreements for fragile fingers, but it would suffice to a lower firing to save the Horn of fingertips ... Finally, I think.

For the handle, I give it a 9, his problems are related to the fading sound quality.

- The handle, I have already mentioned above.

- The weight is quite big, but the guitar is pretty big too, I suppose it must be less suitable for small jigs. However it is very well distributed and can be played standing for several hours without problem. While sitting all goes as superbly.

- For sound, I have already stated above, too. Whatever the chosen combination of pickups, the sound is.

Guitar, if it is originally intended to jazz, suitable for a wide range of music, always in case I did find that happiness.

- At the sound, clean sounds, round him ideally suited especially a tube amp, that said, I tested the amp transistors directly on the mixer, or even a keyboard amp and by direct entry into a home studio, she has always behaved very well: I've always managed to get the most interesting. Also I used also with distorted sounds and crunch and the same: nothing to throw away! However, attention to the large Larcena distos (the box!).

- The sounds I like are still those made on tube amp with clean channel, but it's a matter of taste. These sounds mixed with synth sounds (via the sensor South are most interesting)

-I bought it, it's actually my wife who has given me a birthday (and yes, it is the lucky ones!) 8 years ago. I always wanted a guitar case before, I wanted an Ibanez (I can not remember the reference), but back then there was a shortage in France, the seller (an excellent guitarist) has routed my wife on this model that I did not know and to be honest, I had a reluctance on the mark but was quickly dissipated to the quality of the instrument. I'm playing now for over thirty years and guitar, I tried ... I do not say this lightly.

-As far as I know, the value for money is excellent.

-I would do this choice without hesitation, and even with this guitar, I changed my perspective on brands outsider: if I have any advice before buying a guitar, you must try it, sometimes it is better to buy a high-end of a small brand that low and middle-end of a great brand for the same price ... However, in my view, Cort is not a small brand, but when I got this guitar, I did not have the same opinion.

thom18's review (This content has been automatically translated from French)

Cort LCS-1
5
The head bears the signature of the master, the tailpiece his initiale.A unless it be that of Cort ... This is an arch top body with wide and deep. You have to be broken in this type of instrument to feel at ease, but there are times when it's worth making an effort. Here it is. Spruce top, flamed maple body, sunburst finish is simple and successful, we appreciate the shield of wood which also benefits the sunburst. The curly maple neck also has a profile that gives the sensation jazz but in fact is much more modern than we think. It is quite late, well arched, in short, is the comfort guaranteed. The rosewood fingerboard has pearl markers that mix and abalone, 20 jumbo frets are trapezoidal in section, which provides a rigorous non-aggressive tone. The oil bath mechanical buttons have "tulip". The bridge not set at the table has a wooden saddle height adjustment thanks to two screws. Compensation is provided.

This guitar has a special astonishing: every note you play is an invitation to the next. It's pretty hard to explain but there is an indescribable something that gives wings to guitarists. You want to use as possible, to make refinements in the phrasing of the delight sustain. This feeling is indescribable it due to the violin, the sound, something else? Mystery ... the two microphones are "duncan designed" whose coils are visible, they are controlled by two volumes, two tones and a three position switch. The microphone is full and serious atmosphere. Bass, absolutely beautiful, bloom in our ears while being very accurate, they are among the most beautiful I've heard. The rest of the range is certainly not below, but more common. There is the need to dive, the desired smooth, short, a wonder that micro serious! The sharp bite and is more willing to allow some inroads in saturation, for those who love. It is a little less jazz than the other, but still usable.

This guitar has it all a subtle blend tradition and personality.
Long played a roland jazz chorus 120 is a jewel. It has nothing to envy of much more expensive models ...
To test urgently

albertverdan's review (This content has been automatically translated from French)

Despite its size, which requires an adaptation, very comfortable guitar

Suitable for all styles, although predisposition for jazz, blues ...
Sounds very versatile: Round neck pickup and warm with low monumental, the most beautiful I've heard, and treble very precise pickup rougher ... splits work wonders to diversify laz palette of sounds.

Used for 8 years, I would definitely buy it back and would advise anyone looking for a great jazz guitar, still versatile, professional and most aesthetically beautiful ... short, almost a gibson for about 1100 euros!!