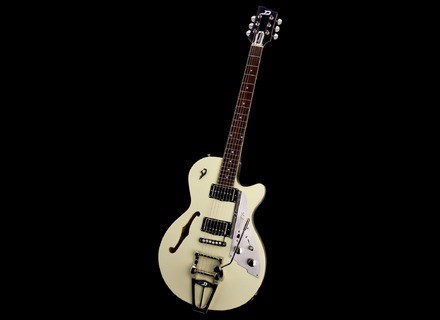 kluck's review (This content has been automatically translated from French)

Duesenberg Starplayer TV plus
5
Fabrication?
Two microphones: a P90 neck and a double bridge, 22 frets
vibrato type Bigsby
3 position selector
handle collbr /> finish crazy everything has been thought as an old custom (car) down to the last button amricain even the tui throws a max, all through no fault of taste
the table is black lacquer, the back reveals the wood through a beautiful almost black lacquer

The atmosphere-paul gibson, gibson type neck (consistent), and many scratches lgre balance
sounds are formidable, the P90 can sound thinner that a PAF while keeping a more micro pais a stratum
Gibson is the dual trs without much gain but a lot of grain
the central position of the selector is a pure rgal for arpges or a little funky rhythmic

Play for a month on an old fender deluxe reverb and a vox AC30 it replaces for scne my old 335 that I dare not go out. She excels in a register jazzy blues rock pop. Not too much has my opinion on the extreme mtal

A mouth of hell, a sound of hell. The mag and I have bought has retracted two parties and are 1 / 2 Journe (more than 1300 in Roros province that is a feat), not to try not to take him

Virtual Decadence's review (This content has been automatically translated from French)"Why did I wait to buy one?"

Duesenberg Starplayer TV plus
5
No details on the different countries of origin. The brand is German but hey, it must be manufactured or assembled elsewhere as others.

It is a semi-hollow. Half of the body is hollow (like the Fender Thinline). Interesting as config. It plans not too bad acoustics but it&#39;s still close to a solid body micro acute. And it was not the size of a hollow body. It should be closer to a Les Paul (I will check with that of a friend).

Bridge: vibrato that resembles a Bigsby but more sensitive than on my Gretsch 1965.
Channel: looks like a Les Paul. Very comfortable once you get used to it.

Micro: DP90 with neck pickup, Humbucker in bridge. The doc says that the central position involves a wiring / special circuitry to give more Twang. There &#39;s actually the twang.
Mine is the model Chris Withley, red, with the piezo (Starplayer TV +).

Naively, before trying it, I thought we would have the option of having the piezo as on some guitars (with Brian Moore for example). Here too, it is mixed. Knob the tone has a central position. Backwards, we have a normal tone, the forward rate is the piezo with the sound of other microphones.

Who likes the Gibson sleeves, it is familiar territory. Since I do not play quavers quadruple to 240 BPM, I do not care the handle quickly. Especially since 1) I did a lot of low 2) I play a lot on acoustic. But I think it is more comfortable than a Les Paul neck 58. To be confirmed.

Contrary to what might suggest its vintage look, this guitar is very versatile. So yes for the right sound, but it takes a little digging to find plenty that the people we&#39;ll actually use. But anyway, I like this side, compared against a good Les Paul that sounds cliches (if only one has a branch in Marshall, we are fully into the picture). Yet these are great guitars to play but I do not see myself owning one without at least a Telecaster next to radically change and have a more funky attack. Except that I have neither the desire nor the means to carry around with me in the backline bar where I play. Dusenberg like a guitar, I conceived as my only guitar (I keep only the Danelectro lightweight "spare" and the others unless I sell the old Gretsch that has never left me since 1988).

I play mostly rock but I finally wanted a versatile guitar. I want to switch from white rhythmic groove / rock English to something more bold blues-rock riffs and solos with, why not the fuzz. Not to mention that 1) I remain a fan of Brian Setzer and 2) I also want to send sounds a little "surfing" crammed with reverb and tremolo.

The DP90 is a wonderful, open, beautiful midrange. I did not buy this guitar for playing blues solos and I will use this position for a crunchy rhythm config modern pop. No problem. With its piezo hair that is pretty clear too.

The humbucker sends the wood like any good humbucker.

The intermediate position twangy "I was a little confused during my test store. I found it almost more than Fender Gretsch (and I am very fond of her but I hate the Gretsch sound" out of phase Strato "for example). But moving a few adjustments, I&#39;m left with a version a little more "modern" the twang Grestch (I do not see better picture, sorry).

After all a matter of what we have branch. In stores, I was a Vox Pathfinder, trick transistor fortunately I have to compare with other scoops (Dano 59, Tenessean Gretsch, Fender Lead, the Les Paul R8 and stratum. A dude, Variax 600). Once home, I tried my Tech 21 Character Series: the British (Marshall sounds typed) it goes alone. In humbucker, well we see the closeness Gibson is on. For other configs, I fell a little drive to get a nice crunch in rhythmic light.
Then I tried the "Blonde" (sounds Fender typed) that I was going to sell. configuration "Bassman" I regained some of his Gretsch. I was ecstatic. Pushing the drive, not too far, I rock-pop sound I was looking for interesting with the 3 configs microphones.
In his clear, of course, is perfect. By playing around with the volume pot of Tone, I managed to approach a sound type ES, well wooded. and going further, I told myself that jazzmen could love this guitar. But it remains very good rock at the base. Sansamp pedal but this had not convinced the crunch sounds with other guitars while there ...

For the lens, you&#39;d better love the twang that sounds pure modern. For fat, no problem.

If we start from the fact that I was looking for a guitar that would sound twanggy and incisive as a Gretsch (not so far) or TV (ah there we are far from it) but can also push the overdrive for a solo fatter side, this guitar is the best compromise I found.

Add that I can not imagine a guitar without vibrato, and I always have a soft spot for Bigsby, and there the Dusenberg begins to accumulate good points.

And when you love the Les Paul and Gretsch, we like the look of this retro tinsel Duesenberg. Besides my wife has cracked (yes to optimize the WAF Wife Acceptance Factor, do as I marry a guitarist). She, who usually plays mostly acoustic, decided to grab. Indeed it is almost the only black spot of this guitar. She is envious of another ...
Well I would also mention the flamed maple back. It&#39;s always the same effect if we never see him when we play (ah guitarists and their sense of unnecessary detail).

So beautiful, the sound I wanted, vibrato-haired, a violin that exudes quality and enough versatility in the configs microphones ... I did that recently so we will not ignite. But it is very similar to the specifications of "my perfect guitar. For the moment she meets.
Warning: this is not a copy of Grestch or Gibson or Fender even less. It still has its own character and is versatile. But the intention of finding sounds approaching brands named above, it is an excellent compromise.
Now those who say, for marketing, it&#39;s between a Gretsch and a Gibson did not quite wrong if you look at the Twang in the central position and humbucker in the treble. But its not close to a Les Paul in an intermediate position (you know the wonderful clear sound of Jimmy Page) and no sound like a Gretsch acutely. Must choose.

In the least, I would say: hey guys Duese, 150 euros for a holster not available bof ... yeah ... it made me go a score of 1800 euros for some guitar, well worth twice the price. We will not quibble either.

Early warning: I have never bought new guitar of this quality before, but I liked the goodies available with the guitar, especially the nail file badged Dusenberg

See all 20 photos of Duesenberg Starplayer TV plus »