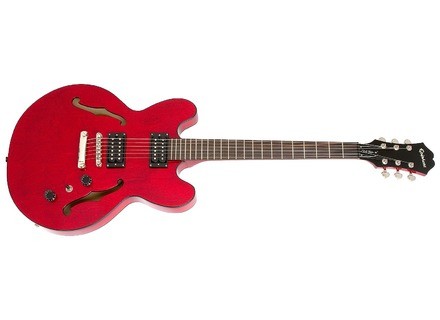 Ps : if you want to buy me, put 290 € on rakuten (call before). "Dot Worn Cherry - out of catalog; all mahoganny, neck inclued !)
Did you find this review helpful?yesno
»

Epiphone Dot Studio
5
The Epiphone Dot Studio is a clone of the classic Gibson ES-335 Semi-Hollowbody electric guitar. It has a mahogany top, back, sides, and a set in place neck. The neck is maple with a rosewood fretboard. It has two Vintage Alnico V plus pickups and a 3 way selector switch with a tone knob, and a volume knob. I believe they are made in the USA, though I could be wrong. It has 22 jumbo sized frets and a 12" fingerboard radius. The guitar is light and fast and very smooth to play, and really great looking. The finish is great and I love the brown woody look.

The guitar is a great play, and has a great range of tones. It's comfortable to wear, and doesn't weigh too much. Feels good on the shoulders and is comfortable to sit with. The sounds range from mellow and subdues to sharp and bluesy. It's great for hard rock, jazz, or acoustic sounds too. The neck is nice and fast and feels really good, and the frets are all perfect. It's a real treat to play, and I just love the action on it.

The Dot Studio sounds great clean or distorted, and offers a wide plethora of sounds to pick from. I can get a good clean 80's shimmer with some reverb and chorus, or I can get a nice crunchy modern rock sound with a distortion pedal. It's also great for jazz with a nice smooth, mellow tone that's very even across it's frequency range.

Overall, the Dot Studio is an awesome option for someone who wants a good guitar and doesn't want to shell out. The 335 looks and vibe rock, and the sounds are sweet. It's great to perform with and gives a nice classy look on stage. It's comfortable, affordable, and an all around great guitar.

Epiphone Dot Studio
4
Been playing for almost 30 years but you wouldn't know it. It's usually on and off in between my other hobbies. Now and then I will get into recording heavy, usually when inspired. I like country, rock, metal and pop.

I bought this unit from Musicians' Friend. I paid $269 for a B stock model so supposedly it was damaged or old or something but honestly I couldn't tell that anything was wrong with it.

I love the semi-hollow body tone. I also like the laminated maple top, back, and sides, the set maple neck, the semi-hollow construction and of course the vintage Alnico V plus pickups which really give it a warm sweet tone.

The neck isn't real comfortable for me even though I like it in appearance.

The quality seems fine. Epi construction is pretty good, I think they're made in Mexico or China or something. Not bad quality for a few hundred bucks though. Geeze, how can you beat that!?

Epiphone Dot Studio
4
Primarily a singer, I've been playing guitar for about 10 years, been in a band (drummer!), and have continued to record and play with other musicians on a non-professional basis. My styles range from folk to hard rock, with heavy power-pop leanings -- Big Star, not Green Day.

My friend bought this guitar for $220 from Musician's Friend, as a refurbished copy. I helped her select it and test-run it.

For the price we found, it's a very well-made guitar that looks gorgeous, with a shiny reflective black surface that looks different depending on where you put it, like a monolithic slab of obsidian. Very stylish indeed. Low action, simple control layout, and a pretty nice sound, especially clean with chorus/tremolo, just a bit less complex than my own Epiphone Dot. And this guitar is light as a feather.


The guitar arrived with a poor setup. There was substantial buzz, and the strings caught on the frets. After taking the guitar to a professional tech and luthier in L.A., he and I concluded that a bad fret polish job was the culprit. After a proper setup, the situation improved, though the low frets still meant a harder time with bends and vibratos. The output jack is in a bad spot, right where I'd usually put my right knee, so my leg is constantly leaning against the cable jack, not a good thing. The control knobs are also a bit flimsy, and the distorted sounds were so-so, though testing the guitar on a crappy $90 Marshall solid-state amp couldn't have helped.

Quite good, with especially a nice visual presentation. Not as well made as higher-priced Epiphones. And the guitar's super-light weight also makes me feel it's flimsier, not as substantial, though that could be an illusion.

I think my friend lucked into a deal in this case, and $220 was a good price to pay. The professional tech here in L.A. complimented on the quality and sound 20 seconds after we entered his shop. However, there's one thing to keep in mind, and that is the fact that this guitar lists for $500 and retails around $330. I would consider $330 too much to pay for this guitar; at that price, you might as well throw in $70 more and get an Epiphone Dot -- you'll get much nicer finish options, binding, pickup covers, and a better sound. My own Epiphone Dot was only $350 on eBay. However, at the lowered price of $220 for the ES-335-inspired construction and styling, this guitar was a great deal. Experienced players might find its sound a little uninspiring, but for starter electric players, this is an excellent place to begin. It certainly blows every Squier I've ever played out of the water, especially in terms of build quality.

This review was originally published on http://www.musicgearreview.com
Did you find this review helpful?yesno
»
Read the 11 user reviews on the Epiphone Dot Studio »