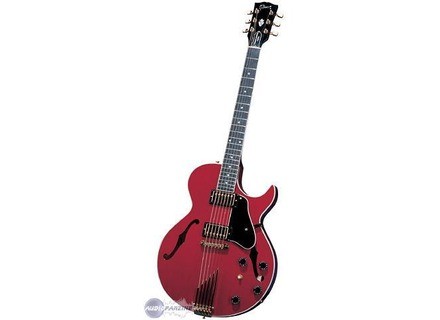 Gibson Howard Roberts Fusion III
4
I got it from elderly instruments new for around $1350. I had been looking for one because I decided I wanted that specific model. I played an older used on in Guitar Center about 6 months before buying mine and really liked that way it played and sounded.

I like the feel and the sound of the guitar. I can get a nice round fat jazz tone or crunchy distortion. It is very versitile. It has the positive aspects of an ES 335 but has a smaller body. I'm a small guy, so an ES 335 is too big for me.

I haven't owned it long enough to be annoyed by it.

For the type of music I do, this is a very good guitar. It is very versitile. A good guitar for the money.

I think the pickups are 57 classic (check)

It turns out that I listened Howard Roberts long before buying this guitar
HR played in the early 60's east coast (at Capitol) he bcp enregitré for WB too.
he plays very bop, but begins to jazz / soul together blue note on the west coast (recovery tubes of motown, or beatles eg)
It was widely recognized at the time but cataloged "easy listenning" and eclipsed by George Benson released his first album in 63, with training with organ and drums that HR also fond. (George Benson then plays on a standard ES 335 in Guild, HR on a Gibson archtop)

his records sound less roots and furious than benson (especially the first two) and are more products, but this guitar is underrated because he plays really terrible.
He has signed with Gibson and Epiphone models (electric guitars with rosette) and the Howard Roberts Fusion model series I, II and III
care model is developed ds 90's, it is therefore not a guitar that he plays audio in the 60's

To make a guitar that touches very good price for a poor chance of career
(HR taught then, there's disks in verve ...)
this guitar would cost twice as much if it was called GB

Warning sound is not typically bop is a fusion model which aims especially versatile and small footprint.

it sounds worse than the UK produced in the 80s, but better than the current
it is clear, just between 335 and 175 in terms of sound, but with an ebony fingerboard, which at that price no longer exists.

the fusion III beam balsa sound is affected compared to a version I or II (less rounded, lower manufacturing costs capital has been there)
it's a shame because this detail prevents fall into the category of jazz guitars of its own (this is only my opinion)

in extreme cases (jazz and old school rock n 'roll) is worse than the other two but elsewhere it is better (accurate, clear, round, mellow)

it makes a very interesting tool if you want to avoid lugging two, it is comfortable to play rock, funk, modern jazz
saturation is very good with the intermediate position, it is a happy coincidence?

its main advantage is to be original, it stands out in a good way gibson
(Are the qualities of the brand, not the default unjustified coast and its stereotypical)

I for 5 years and I will keep because it is a good tool, versatile, quality.

clearly preferred over a new Gibson ES which will be less well finished, more expensive, less reliable (the woods are glued after less drying time)

3000 € it would be far too expensive for the half is an excellent value for money.
therefore advise but beware this is not strictly a jazz guitar

e-bou's review (This content has been automatically translated from French)

Gibson Howard Roberts Fusion III
5
The Howard Roberts Fusion III is manufactured in the USA. The handle is the Lespaul 59. Much finer than the 335, for example. It is made for fast play. The ebony fingerboard gives a clear sound, and slides perfectly under the fingers, unlike the rosewood that "hangs". The pickups are humbuckers that deliver clear sound breathless and hot. A three-position switch, two volume knobs and two tone. Nothing but classic. Less conventional, however, the arrangement of knobs and the selector. Once the guitar on his knees, available fall naturally to hand. In this regard, I would say that aesthetics is secondary in relation to ergonomics. The tailpiece is made up of "fingers" individually adjustable, which gives one side a little shifted to streamline this guitar designed in 90 Years. This is very useful however to fine-tune the guitar.

The neck is a joy for a demanding guitarist. Rapid access to acute is perfect. The guitar is very balanced on both knees strapped. Ergonomics is not a particular problem. Fairly light and compact compared to a 335 or an L5, it arises very naturally against the body. Sitting, one is close enough to the bag to balance the guitar and makes a good position on the handle. The sound is immediately to the appointment.

Instead, Blues Rock, I wanted to try my hand at jazz. This guitar takes over and merges the principles of the 335 (Balza beam), the Les Paul, and the shape of the 175. The result is rather unusual, despite a fairly classic look. I played on a Boogie Studio 22. With distortion, you get a fat, a bit like Santana, sustain very surprising. The micro acute sounds good too, but I did not buy this guitar for that. In his clear, this guitar has nothing to do with 335. The neck pickup has a round to Joe Pass. Round without being deaf. Highs are bright and fine. The bridge pickup gives a very funcky. In mixing the two pickups found the sound a little medium of 335, to be mistaken. The Les Paul, in my opinion not really mean full. After it is a matter of taste, but I have installed a game thread 11/50 flat, I put everything to build on the guitar, the amp at half power on the clean channel, a little reverb, I close my eyes and I forget I'm playing bad.

I use it for two weeks. I love his big jazz sound, ease of handle that slides alone, compactness, versatility. I do not like the original Pouche a bit narrow, which makes it difficult for storage of the instrument. It happens, it's a blow to take. This problem is not necessarily apply to all owners of Howard Roberts Fusion III. This guitar is great for those looking to play an instrument. If it's an investment, prefer a more prestigious. The model is of recent design, it lacks a few hands in his famous painting of hunting that he be given the interest it deserves. I tried about thirty 1 / 2 boxes gibson before my purchase, a dozen of 335 of all ages (65 to present). it has nothing to do. We must take advantage of the lack of interest in this model a little confidence, and do good business. I bought mine for 1500 euros a seller very friendly, a real musician who loves the instruments, and I thank (it will recognize). If I had four hands, I would buy a second.

GuitarJazz's review (This content has been automatically translated from French)

Gibson Howard Roberts Fusion III
5
[/ b]
Made by Gibson in Memphis (Tennessee). USA
22 frets, pickups 59 (dual coils). Two volumes and two tones of high quality. A 3-position switch, with Gibson classic.
The bridge is a Lespaul.
The handle is a Lespaul, a very good and nice finish.

The sleeve is very easy to play with an ebony fingerboard of the highest quality.
Access to the treble is great enough.
The instrument is heavy, but for its central beam of the body is essential.
The sound is very easy to sustain.

I own archtop Jazz guitar maker and I wanted a gibson jazz with a spirit 335, I'm not disappointed because I play jazz.
I have a tube amp VOX, I love the sound.
The resulting sounds are fat, with a slight crystalline easily adjustable with a dial tone. I mainly use the microphone serious (mamche). For his sharp rock the mic is powerful and very well suited.

I have this guitar for 2 months.
The sound of jazz neck pickup is fine with me.
I had the opportunity to try a 335, an ES 137 Custom, I hesitated a lot between the two, but when I heard the sound fatter height of the Howard Roberts Fusion III I have all of subsequently appealed. So I do not regret my purchase.
In terms of price (2200 €) is still too expensive.