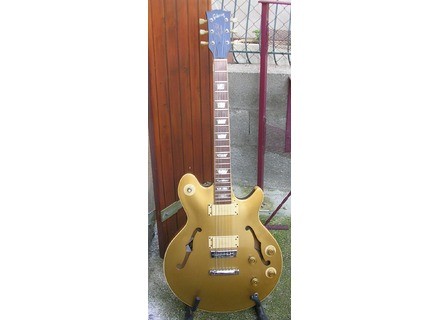 Gibson Les Paul Signature Gold Top
5
This differs from other Gibson Les Paul in many ways: one is a semi-hollow 335 type, but its sides are asymmetrical (the lower a small notch of Les Paul) and two, it has a phase switch in and out and a frequency selector that provides three positions, more or less medium, three, she has two output jacks, a high impedance and low impedance. The handle is made of several parts. It was produced from 1974 to 1978 in small numbers, just 1463, most dating from 1974. Finally, it was proposed in two colors: gold top (the majority) and sunburst.

In terms of use, the action is very low. The game is also facilitated by a handle thinner, narrower than the 335. Access to acute is easier too, thanks to the small indentation. Its possible settings offer a completely new range of sounds from Gibson. By removing the medium, we obtain a sound less fat than what the brand offers usually. However, it is of course get the grain of the Les Paul, but also that of the ES-335.

The Signature LP is amazing. This is the most versatile model in Gibson. Can be drawn also sounds reminiscent George Benson, 80 years, very accurate. It can be very rock, funk and jazz, as desired. It is also particularly strong, however, that not all ES Jacobacci (micro Benedetti !!!). But it is a pure Gibson, with the grain inimitable and often none.

I have owned a lot of guitars: a Gibson ES-Artist (made in 1979), a Gibson Les Paul Standard, a Schecter Telecaster, 1982 (time Tom Anderson), a Fender stratocaster plus (lace sensor pickups) and a Fender Stratocaster Nature 1979. I still have a Gibson ES-175. But if I quote all these guitars, not to show off, but a little more to support what I think of the Signature LP: it is simply the best guitar I know. Yet I have played, apart from mine, a bunch of other guitars. Clearly, the Signature LP is, for me, the ultimate electric guitar. The one I was looking ever since. I do not take me by saying this: I have for ten years.
Also on my site: http://www.bruynooghe.fr
Did you find this review helpful?yesno
»