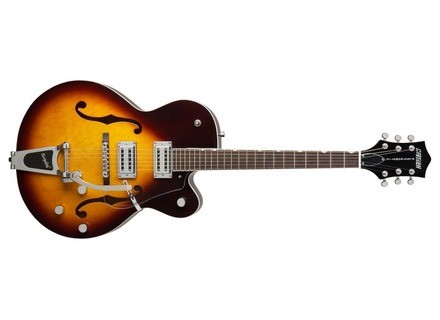 Gretsch G5120 Electromatic Hollow Body
4
I never liked Gretsch guitars before but when I saw it I had to pick it up, and when I played it I fell in love! The neck on this guitar fit me like a glove. I usually like very thin necks with light strings. This neck isn't that thin and I now use 011s on my first E string and I still can bend and get good vibrato with it. The sound is very warm, especially the bass pickup. The treble pickup has a little less bite and is lower but not bad. I'll replace it though in time. The main problem I've had with this guitar is that it came with very cheap tuners and it never stayed in tune. I spent a lot on set ups and then replaced the tuners with good Grover ones. It got a little better but still didn't stay in tune that well. Now about a year later for some reason it's settled in and finally is staying in tune. I don't know if I just got a bad one, but from other reviews I've read it seems that others have had problems with the tuners on this model. It is a gorgeous guitar and I love it now that it's staying in tune!
I play it through a 5 watt Bugera tube amp and it really sounds sweet!

Gretsch G5120 Electromatic Hollow Body
4
The Gretsch Electromatic series offers budget guitars that carry all the sense of class that the flagship guitars are known for. The G5120 is a take on the larger, hollow body electric guitars the brand is predominantly known for. The guitars body, sides, and neck are made up of laminated maple, while the fingerboard is rosewood. The electronics consist of two proprietary Gretsch humbucking pickups wired to a 3 way toggle, and controlled via a set of volumes and a master control near the bridge and a master volume positioned above the pickguard, as on the 6120 models. The Orange finish is beautifully done.

The G5120's tuning stability is excellent, and allows for more than sparing use of the bigsby licensed tremolo. Gretsch's take on a thin neck has never carried much favor with me, so the wider neck of the G5120 felt very welcome compared the the other electromatics I've played. Albeit wide, the neck allowed for quick access up and down the fretboard and the cutaway did not encumber movement at all. The pickups are TV Jones styled and are underpowered to provide excellent, tasteful, vintage tones.

I played the G5120 through a Fender Hot Rod Deluxe III. I used the first stage of the carl martin plexitone out front and only the reverb of the amp.


The guitar paired very well with the fender to create many different useable sounds. The typical demo of this guitar will typically feature a rockabilly tune or something mildly bluesy, this guitar is capable of much more than that. The cleaner sound of this guitar makes it fit nicely into the mix of a two-guitar band. I use this guitar on a couple of tracks live and it really adds something unique to the clean and low gain passages in those songs. Using the plexitone, I was able to get percussive rock riffs and screaming double stops. The guitar is not nearly as nimble as my SG, but it can hold it's own when it comes to classic rock vibes.

The Gretsch Electromatic 5120 is an well priced solution for musicians who want the mojo of a hollow body guitar. It handles gain fairly well, and is plenty more versatile than one might expect.

This is a fantastic guitar from Gretsch, and it can be found for about $700 street. To start, it has a very nice, expertly-applied finish, and the fretwork is great at this level. The quality of craftsmanship all the way around is much better than most other guitars you see in the sub $1000 category. The playability is excellent, and the strings respond with a nice, snapping crispness. The Bigsby tremolo bridge is extra cool, and it makes those subtle chord bends and shakes sound just right. One thing I've always been a fan of is how cool the small hardware details are on a Gretsch - the knobs, switch cap, and strap buttons are just the coolest on any guitar, period!

This thing sounds like a dream. It gets that twang, that spank, that hollow-jazz bebop tone, and that snarl. It really excels at rockabilly, jazz, country, blues, and alt-indie styles. The pickups achieve such a nice, singing tone, yet every tiny bit of the attack is reproduced evenly. I'm not sure there's a guitar out there with more of a defined "attack" sound than a good Gretsch.

Fantastic! At $700, this utterly smokes most other guitars in the range, even at guitars costing $500 more. The sheer playbility, warm sound, cool features like Bigsby and the small hardware, and the comfort of this axe make it a real winner. All this is not to mention how nice it looks! With this guitar onstage, a guitarist is definitely making a statement, and that statement is "I am classy, cool, and I have great taste in instruments. Snarl!"

tiplu's review (This content has been automatically translated from French)

Gretsch G5120 Electromatic Hollow Body
4
Needless to reconsider everything, others have done before me ...

I decided to post my opinion on this guitar because it differs much point on everything I read.
Precisely on the handle, I do not agree with the main body. I find it too late in the hand and also with a flat profile too ... On a guitar vintage inspiration, the choice of neck profile seems incomprehensible. But hey, this is a greater focus public and others enjoy ... Oh, it takes a little time to tame the floating bridge. Personally my guitar did not take the deal. I solved the problem by carefully filing the gorges of Nut, the bridge, greasing all that the graphite mine and putting a (very) large drawing ... You must also adjust the height of microphones, pads, I can tinker rings pickups to raise the bridge pickup closer to the strings ... Well, it is the job of fine tuning but this is much better. Issues of disagreement were anyway not possible ... You can not spend time to agree. Today it no longer moves.

I bought this guitar after having tried among many others in store. I had never played archtop and it was the slap while I was rather looking for a solid-body. The sound is vintage arch, burning in neck and sour and very personal in the bridge. But it is the neck pickup that attracted me ... I play this guitar plugged into a twin reverb (65 reissue), and out comes a huge blues sound, rugged, dynamic and warm as I never had known. All the defects of this guitar, small buzz of the bridge etc. participate in its ... Once connected, it's roots ... How would you describe ... With a little overdrive, neck pickup, j ' feel I tease the sound of Alvin lee in the album Ten years after "recorded live" with the tremolo in the twin, I am at Neil Young ... I'm calm and play on the acoustic capacity of the body, explores the game variations on strings me closer to the bridge and I approach the sound of Marc ribot ... And this is funny ... The three play on Gibson when I approach their type tone ...

After reading all the reviews about the quality of the mics, I decided to see if a replacement transfigure this guitar that I love. Hop, I found two Grestch HS FilterTron (alnico) and I started to work ... Result: the filtertrons are excelents is on ... Better defined and rich handle and less shrill in the bridge .. . But I lost the way that made me vibrate in this guitar. So I put my neck pickup and yet I kept FilterTron trestle, more versatile than the other, but I can not guarantee that I will not one day replace the gretschbucker (for blues Tuareg way of the Zairian rumba, or dirty punk ...).
So here we go! Not being a big fan of gretschs and folklore that revolves around, I chose this guitar for its sound, probably closer to an old Gibson as a 6120 Rocky ... and a little muddy course, but so hot ... I pointed out here that it works in my twin and the other amps, I do not know. Changes microphones concern those who want a more guitar "Grestch" in the sound. For others, open your ears. The sound is a little dirty but huge. Vintage wish ... Why will deliver cleanliness there? Rest the handle ... I love this guitar so I wonder if I'm not going to grow myself ... Well, we'll see.

5120 Grestch, it's not a guitar to yet another demo of mystery-train on utube and better.
It has its own personality and its not necessarily gretschienne deserves to take the other territories
the rockabilly. This is where it becomes great and gives meaning. For those who love hot music, a little dirty blues to Latin, African music and so on ...
Ah last major points: The neck pickup sends serious bass ... Very convenient for those who play in duo guitar / drums ... If you know what I mean ...

Did you find this review helpful?yesno
»
Read the 15 user reviews on the Gretsch G5120 Electromatic Hollow Body »