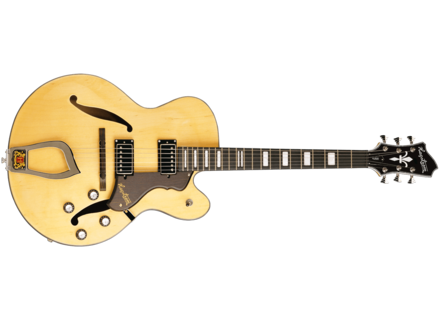 CT-64140's review (This content has been automatically translated from French)

The handle is very nice; Hagström claims in its advertising suggest the "handles the fastest in the world." This may be a bit pretentious! but I must admit that I really enjoy playing it. Whether it&#39;s solo or in rapid sequences of chords as they practice jazz, one has the impression that everything runs alone.

The guitar is light and standing for a game I find it well balanced. To play sitting, whether classical position (between the two legs, like Joe Pass) or modern (on the right leg for right handers), it is comfortable.

Settings (access to "good" sound ... I put quotation marks around "good" because I&#39;ll get to later) are not complicated. The tone pots lack of progressiveness for my taste, and treble to zero position, it was a bit of a damper printing. The volume pots seem correct.

Sounds they are suitable to my style of music? (Jazz and blues. Occasionally rock) Yes and no! Yes: when buying and during the first six months of use, considering the reasonable price of the instrument, I found the sound pretty good - except for the pickup.

The neck pickup gives a soft sound at a time while responding well to attack. But (and this is where justified my "no"), after having not played badly, I got tired of the sound: it is good, but without personality, very mat. It&#39;s not bad, but it is not the kind of sound that makes you lend an ear when someone else plays ... Note that I have tried many types of strings to try to get back in love with this instrument, but the spark does not happen! A small detail: I tried several games Thomastick JS112 (strings really great), but with three games tested, the G string (despite attempts at adjusting microphones) sounded much-much stronger than the other strings! JS112 ropes were unusable, although the sound quality was pretty good apart from the problem of the balance of a string to another. The best result that I have found so far for my taste, it is with Dunlop Electric Nickel Wound Medium (10-46) gives the strings sound with enhanced medium and I think it personalizes (a little dde ... not miracles, though) guitar (or rather avoids it has sound too passe-partout)

The bridge pickup ... I never use it! I find it flat and narrow. It reminds me very bad sound could be heard in the 70&#39;s in very bad orchestras balloche (equipped with bad transistors amps) sounds coming from very poor copies of ES335 manufactured by very bad guitar brands! Used with my Mustang pedals, but I find it less bad.

I play a Laney Cube12R and a Palmer Fat50 Combo. Despite the reservations made above (lack of personality, and bridge pickup that I do not like), I&#39;d say it&#39;s pretty good. The guitar is doing pretty well with a Mustang floor and also rather well as pushing the saturation of the amplifier. I should also mention that the microphones crunchent not much - in comparison, I have a Godin Kingpin P90 that I with it, crunch (nicely) a quarter turn. This ability to stay clear appeal to some.

If the bridge pickup I had not much disappointed (and upon acquisition: it has not even led to a progressive exhaustion!), I would have discretion as "7/10 - good."

I use it for 2 years and have gained without trying other models.

- The violin (really good, I think he on a guitar price)
- The ergonomics of the guitar
- Aesthetics
- Ease of play that gives the handle
- A little tune that moves (mechanics seem good quality)
- Good sustain for a hollowbody (especially with Dunlop strings mentioned above)

- Lack of personality of his. But I feel that it is the same (or worse!) Archtops with much in the same price range.

The price / quality ratio seems very good. So much so that I decided to equip the new pickups. I hesitated between Gibson P57 + and TV Jones classic. My choice will be the latter. I have guitars equipped with P90, and in the spirit of broadening the range of my guitars with different sounds typed, I dismissed this choice. But I think the P90 is a very good opportunity for the development of this HJ500 that worth.

Providing a supplementary budget this guitar (which I find beautifully crafted and very enjoyable to play) to change the pickups (and maybe the bridge? I am tempted by a metal bridge Gretsch, remains to be seen if the dimensions of the permit), I think for a reasonable sum, you can have an instrument that can compete with guitars much more prestigious.

In this spirit, yes I would do the same choice. And my score of 8/10 "very good" is obviously a relative rating that reflects the reasonable price of this instrument.

This guitar, I think, can make happy those who want to play jazz or blues with a limited budget. If I can afford an additional opinion wise, I would say that for those who only want to swing or jazz bebop and who do not care to have a bridge pickup, model HJ-550 seems rather preferable.

I will update this notice when the TV Jones have been installed.

barrichinoe's review (This content has been automatically translated from French)

Hagstrom HJ-500
2
Here is a letter sent to a large customer service tool distributor in France.

You will find enclosed a guitar Hagstrom 500HJ. This presents a problem with the adjustment rod. This problem was found by my luthier. It is blocked.
I explained that it was the second time I am appealing to your customer service, for the same problem on the same model of guitar. This problem was found by two different luthiers: Romuald P. and Francis G.
So thank you to verify the next time adjusting rod of the handle is in good condition. The previous maker, François G. (75020) had found a rusty rod ...
I am enclosing with this letter the observation instrument makers on these 2 guitars Hagstrom HJ500.

perfect.
I do some blues, some electric sometimes. And jazz too. It's really very good.

very good value if the handle is adjustable ...

3 months after the SAV suggests to me that there was a problem on the series. I would have the guitar in 2 months.
I'm money back. And I opted for Epiphone Riviera Custom P93 with Bigbsy. It's perfect.

Did you find this review helpful?yesno
»
Read the 5 user reviews on the Hagstrom HJ-500 »