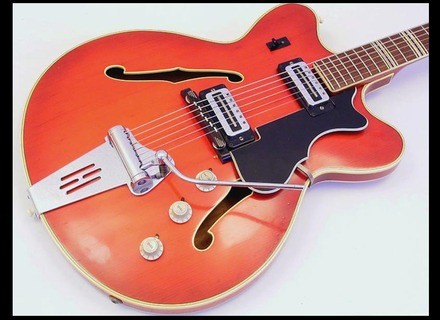 marcofromtheshot's review (This content has been automatically translated from French)" it's round, it's good!"

Hofner Guitars Verythin Vintage
4
I bought it in the 90s in the USA, a pittance (well about $ 300 anyway, but compared to what I had planned to put in a hollow body is that slab) and I discovered a great guitar made in Germany!

The handle was top, clean, I had a few years after refretter but nothing nasty. what bothered me the most and that's why I avoided the play live is that the bridge was floating: a flick of the wrist a little unhappy and that was it, you had 15 minutes to redo the accuracy and agreement. But in the recording studio: a killer.

Very hot jazz sounds of the country through colors. Mine was an old rotary vibrato was a little space to master, but perfect for creating a custom tremolo effect, a simple little flick of the finger on the stem. And it's very round, inimitable. I never found that sound, even on much more expensive Gretsch or Gibson (but probably more recent)

I do not play on half-boxes, but I'd be happy to replay on it if I rediscovered one.

skyzoophone's review (This content has been automatically translated from French)

Hofner Guitars Verythin Vintage
5
Model: 4574 (3 selectors)
Bought in Italy in 1965/66 (by my uncle given in 1982, played with until 1992)
Original fixed bridge
22 frets, rosewood kind?
Microwave toaster in neck and bridge (I'll upgrade surment with gibson classic 57 type mics I affecrione)

the handle is great, very close, it was my guitar and my first segonde electique, and Pettitte epaiseur has undoubtedly contributed to the era has grow rapidly and are know as very rare moments of discouragement ... a distortion, a bar ... done wrong, and will be a cash fund pendat hours. I have with this guitar good memories of my beginnings, and yet it was the community of 80 years, in full period synth and new wave.
The playability was a fortiori Very easy today, the access to all the frets also for her if we start in the rock onn be found very quickly with its dry acute sixties style, I noticed more later type Rickenbacker 330. A bit like The Jam

I play on a long tube amp white brand with this product only the guitar! and the wedding was perfect, when he made the soul I first played on Vox AC30 and 15 years on a bluesbraker 1972

at the beginning, since this is my first elec guit, I played mostly what I came to play, and I seriously thought that was the only sound was that of an electric guitar. Very distortione or wha-wha and btremolo, origin on my amp of the era

) again this year to 80, then!
Thereafter I was apris out of his rockabilly and jazz but rock or blues electique became my favorite ever on ste guitar influences. as you can imagine, no need to ask the havy or exessivement melodious sounds to accompany singing. this is a guitar that I find ideal in a essemble has three bass, guitar batery.
Its shape is also misleading, I play on gibson es 335, epiphone or copy and sound has nothing to do with them. Of the microphones Tosters!

My onle has achetee Italy + / - in 1967 and was employed semi proffessionellement until the late 70s. He refile me in 1982 and I have employed every day until 1992. Then I've used up most of the Moitier 2000s, because the frets were dead. For 6 years I made refretter I oter myself all the original red paint that was very abimee and I keep natural, except for the back of the neck, I also replaced ( with many difficulties and sweat'm not a pro) the cabling, but everything else is original and still works well in a cute little anyway. Very mild, very fine handle, too vintage, requires the use of effects to play the blues, for example. but PROVIDES upgradage classic microphones 57. (Do not know if it will work) I have already used an upgrade in p90 and I find it really well! I play a lot of Japanese Epiphone sheraton 2, 1987 on the head with pearl Epiphone by Gibson (very rare) this is my guit prefer, then follows the hofner verithin4574 Clapton Signature Strat Standard Epiphone casino and then 80 years and also telecaster liteash.
Did you find this review helpful?yesno
»