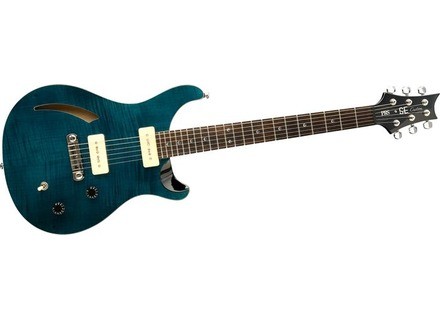 PRS SE Custom Semi-Hollow Soapbar
4
The PRS SE Semi Hollow Custom is a guitar that was introduced a few years back in the company's wildly popular SE line of guitars. The PRS Hollowbody is praised as one of the most versatile and well crafted guitars made by them today, so it's no shock that there would be an SE version. It doesn't have many of the features such as an onboard piezo pickup, but the guitar is quite close to an American PRS in many respects in terms of the construction and tone. It features a mahogany body and neck, flame maple top with cat's eye F hole, rosewood neck with 22 frets and dot inlays, sealed tuners, a wraparound style tailpiece (as seen on guitars like the McCarty) and a pair of dual creme P90 pickups wired to a single volume/tone control set with a 3 way toggle switch. The guitar is built in Korea.

The SE Semi Hollow is certainly a guitar I would call ergonomic. The SE Custom solidbody was a fairly well weighted guitar and the hollowbody is even more so due to its lighter weight. The neck profile is good and bridges the gap between a Fender (thinner) and a Gibson (fatter) type profile, which is good. The upper fret access is good on this guitar. The neck heel can get in the way (like on many modern PRS guitars) but if you learn to work around it, it's usually fine.

Getting a good sound out of this guitar is fairly simple. The P90s do a wide range of tones that are a nice blend of the Fender-y chime and jangle and the Gibson/PRS low end thunder. The stock P90s are surprisingly good in these guitars too which is definitely a good thing for players.

This guitar sounds good for many different styles of music overall. The clean tones have a nice jangly factor to them that is perfect for everything from early rock n' roll and R&B to some funkier sounds. They can also do the gutsier blues or jazz tones when pushed harder due to their excellent responsiveness. Mild gain tones are quite cool with this guitar as well, especially on the bridge pickup with some light reverb and delay.

Drive tones have always been great to me with P90s, and this guitar reinforces my theory with aplomb. The guitar produces the low end heft of a Les Paul or an SG, but with a snappy and lively top end that is like a tricked out Strat and a midrange that meets it somewhere in the middle. Very cool. It works espeically well for thicker complex chord voicings or single note lead work in a more vintage style.

All in all I think the PRS SE Semi Hollow Custom is a great buy for someone looking for a way into a good semi hollow guitar or PRS type guitar for not a whole lot of cash. The SE series has consistently proven itself as a great value for money line with some great tones available within. They are about $700 new, normally high for an Korean made guitar, but they're a good deal given the quality and tone that these guitars are loaded with. Definitely worth a look.
Did you find this review helpful?yesno
»

every musician can learn their sounds and kiffer

Az3r's review (This content has been automatically translated from French)" Stupfiante!"

PRS SE Custom Semi-Hollow Soapbar
5
Does this guitar made in Korea, according to specifications PRS.

It is a "semi-hollow", that is to say that part of the body is hollow. It changes quite sound, but we'll come back over later.

It is a bridge PRS team that looks good bill, set neck 22 frets, thinner than a LP but more than a stat pais. Question microphones, it is P90 team of two (ie two single coils) with a 3 position switch, a regulation of the focus of the volume and tone.

The handle is by far the most enjoyable I've ever given t play. The workmanship is impeccable, he slides alone, battery hair fairly broad. I played about shafts and handles C Jackson ultras purposes, but the l Exceeds all hands down.
CASC is the acute dconcertant ease of such an extent that would almost want to play on carrment microphones! Honntement is really by far the most enjoyable game I've had in 6 years of guitar!
The guitar is trslgre, it is even surprising. I was afraid of breaking ds that I took in hands as its lightness would believe that the guitar is fragile! Pass the Premire apprhensions and fear of damaging it, I quickly made its weight, which can play for hours without ever feeling standing! Finally, we have tended to keep the belt and never take it off =)

His question, really, if he does not flat is that the wrong guitar ...

I play a little blues, jazz, funk, pop / rock, rock with this guitar. LATEST Santana, Hendrix and the Pearl Jam, even a little Metallica all sounds clear ... For more aggressive music, I prefer my Steinberger Spirit and his set 81/SA/60 EMG, but this is no longer the same music =)

I play a Peavey Classic 30 amp, so a 30W All Tube. As with the guitar, if you love not because we were wrong ... I must say that this guitar and this amp really get married! Besides, it would be a shame to buy such a guitar and play on transistors!

The P90 pickups are single coils. So do not expect warm sounds, round and fat as a LP. What an amp with lamps, the neck pickup dlivre clear sound beautiful! Perfect for a nice ride, I got caught out with a sound convincing Nothing Else Matters ...
The P90 "slamming" not bad, and I had no trouble passing my set this guitar EMG. Nevertheless have, we feel that they hold back a little guitar. To see better with microphones invoice.
Dsavantage of the P90 is that like all single coils, they capture all the ambient noise interference. This is confirmed quickly, and ds that are intermediate-switch in position with both pickups together, no sound! Nevertheless have the sound Capt tolrable rest, even if Drang.

Speaking of the intermediate-position, upon which lowers the output volume of the microphones, a very pleasing thing happens. The sound that emerges so clearly from the hollow body and acoustic sound appear! One can easily play Tracy Chapman or without changing Wonderwall guitar amps or more! This gives a "piezo effect" really nice, and yet opens the sonic possibilities of the craft!

Note 9 because I can feel even when the difference between the range of stringed instruments and microphones ...

I absolutely love everything about this guitar, and it is such a pleasure to play that it's hard to do without! More than once I returned home during breaks at work just to be able to play, and each time I failed to resume in late =) I played guitar before that time on my Steinberger on Mexican strata of Jackson, BC Rich, from the LP ... They all have their advantages, but with this guitar it feels really a personality both in the sound in the object itself. I had not shown much fun to play for the first time I played my Steinberger o!

Frankly, 575 euros new, c'tait the case of the century! I hesitating out this sum, but the guitar is worth much more! I have played one more month, so I can not say I would do if this election in a few years, but for now I do not regret anything!
Did you find this review helpful?yesno
»