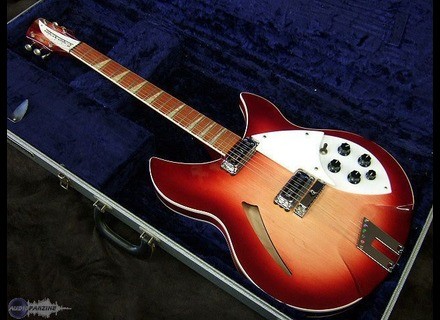 Rickenbacker 360V64
5
This Holy Grail of 60s axedom was bought new from a guitar studio in Clayton Missouri nearly three years ago. Complete with Ric custom case, Schaller strap locks, strap, polish cloth and tools, two sets of Ernie Ball lights and power cable...$1100.00 US. Natural Mapleglo finish, full stereo deluxe model. It was purchased with a personal loan through the wife's credit union...(This woman should be a canidate for sainthood.)

A Ric is a Ric is a Ric. These guitars drip class. Nothing has the tone of a Ric. Too bright for some...but any rhythm player will appreiciate the wave of tone these axes have. Fast necks and low action. Just touch and ye shall recieve...all the tone you can drone. Strings are a little close for a wild fingered lead player. I play leads with it...but I admit to being somewhat mediocre in this department. I play leads much better on my SG...but the Gibson can't match the tone or sustain of the Ric. Switch down and the bridge Pickup has the crisp clean scratch of the classic Fender sound...switch up and you've got the open but bloody tone of the classic semi-electric, the ES etc...and in the middle, nothing but pure Rickenbacker...nothing touches that sound. Not for everyone, but unmistakable to 60s fans and fans of the folk rock of the earlier 70s. Oh yea...Tom Petty freaks too.

Dirty isn't in this guitar's range. You want the muddy ball busting blues sound? Not gonna get it here. Wrong tool for the wrong job. That's what I have the Gibson SG for. When I wanna make the nieghbor's dogs howl I have to pull out the Batwing. I find the SG nearly useless as a rhythm instrument...the Ric is indespensable.

Quality control is one of the things Ric is famous for. Any production line axe they make is on par with any custom shop item you can find. The 300 series are semi-hollows...they weren't meant to be used as clubs or fire axes...but they are tough enough. The workmanship on any Ric is as close to perfection as it can get, and mine is no exception. The common line model Gibsons come nowhere near it. I've only seen a few earlier PRSs...and they could match the Ric in this aspect...but a couple of the more recent made ones didn't. As far as actual finish goes, Rickenbacker IS the finest...period. No two Rics will look exactly alike. Any two Rics will feel and play exactly the same...production model guitar speaking, it just doesn't get any better than that.

Guitars are tools. Some are specialist's tools and some will do more things in general than others. The Rickenbacker semis are both. The jangle and clarity is in a class all its own, but the axe does a lot more. Its a rhythm players dream both soundwise and in its playabilty. It can't do it all, but it does most of it and does it all well. The reason these guitars are classics is obvious to anyone who loves and appreciates his instrument. Pick one up in a shop and fart around with it awhile. It may not fit your style of playing or the sound you chase, but if you love guitar, you'll probably want one...just because it's so perfect for what it is. A beautiful first rate example of the guitar makers art.