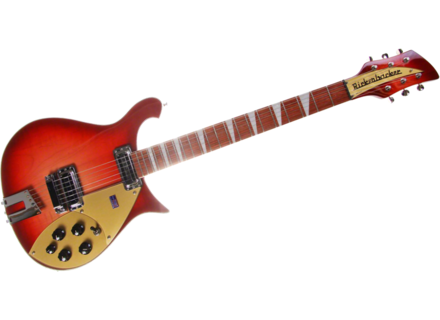 It is not hollow body but solid body. The 600 series have wider fretboards and necks to 300 series guitars

Rickenbacker 660
5
It was my 55th birthday. I'd been playing guitar at that point for 45 years. Thought I'd buy myself a good guitar to mark the occasion. Cost was not a major factor but vibe, sound and pedigree were.
I plumped for the six-string version of Rickenbacker's Tom Petty signature model, the 660. I live in Singapore, where there's no Rickenbacker agent, so I went surfing and discovered Dave's Guitars in Wisconsin. They answered my e-mail enquiries and the whole deal was done without any fuss or drama. I sent a banker's order and a week later UPS delivered the fireglo beauty to my home. The cost of the guitar was US$1250, shipping was another US$150.

Three things really appeal about this guitar - its sound, its looks and its build quality.
The 660 is built along the same lines as Rickenbacker's early "tulip" models from the 50s in that it is a one-piece, neck-thru-body construction with "wings" added to give the body shape. It's made entirely of rock maple, which in the case of my instrument is beautifully flamed and figued on the sides, body and top, and is a cresting wave shape - very retro, very cool. The toaster pick ups (bridge and neck)are the new vintage-specs alternative Rickenbacker has been offering for a couple of years now. Output is around the 5.0K mark in terms of resistance and they deliver THAT jangle as only a Ric can. More significant to me, being British, is the fact that the guitar sounds quintessentially American. Plug it in, turn it up and it couldn't be anything other than a Ric even though it's a solid-body construction and only six strings, the sound is all there.
And so are the looks - Ric's traditional fireglo finish (this model is also available in turquoise) is set off beautifully by chequered binding on the top edge of the body, a bound neck and a gold, two-tier pickguard. Vintage-style (but not oven style) control knobs and Kluson-style tuners complete the look along with those (crucial to real Ric fans) shark's tooth diagonal position markers on the deep red rosewood fretboard. Talk about eye-candy!
The build quality is quite flawless and, apart from one truss-rod adjustment after the guitar had been in Singapore's humid climate for six weeks, the action was spot on straight out of the box. The "box" by the way is a gorgeous silver case made by the same people as make Fender's tweed cases. It has a discreet Rickenbacker badge near the handle, a blue plush lining and is built to last.
The thing that sets this Ric apart - like its 12-string TP big brother - is the extra width of the neck compared to standard models. TP himself asked for this so his fingers didn't get all confused on a thin neck with 12 strings. Translate that into six-string territory and you have a neck that's not unlike a clubby-style '56 goldtop Les Paul or an ES-175D. Very playable and great if you like beefy necks.
I also am of the opinion that such necks do wonders for a guitar's tone and when you hear it, you'll know just what I'm talking about.

OK, the downside to my best-ever birthday present falls into three categories, namely weight, neck finish and power.
First up, it may be a small guitar but, as I say, the neck is beefy and the weight of all that lovely rock maple is too much for an ageing hippy with a bad back to tote for too long. Shame, I was expecting it to be lighter because the body is small compared to, say, a Strat or a 335.
The finish on the neck is Ric's standard high-gloss nitro-cellulose - not normally a problem but in these humid climes it can get pretty sticky, pretty quickly. I manage the problem by polishing it with a premium resin-based NOT WAX-based auto polish about once a month.
And power - those toaster pick ups will not push your average Marshall, AC30 or Fender Deluxe into overdrive territory.
If you use a lot of effects, it's probably OK but I'm a tone freak which means I like a guitar, an amp and a cable and not much else thank you. Make no mistake, the 660 is probably the best rhythm guitar on the planet. It's capable of delivering Lennon-esque sounds, Petty-esque drive or McGuinn-esque jangle but put it this way, SRV would not have used it in a blue fit and neither would the likes of Page, Clapton or Beck.
Not only do the pick ups stay firmly in rhythm territory - and that's not a criticism, the sound is full and rich - the feel of the neck at the dusty end doesn't lend itself to bends and vibratos the way a Gibson or Fender does. That's not a problem for me but it could be for those of you who want to be Joe Strummer and Brian May all at the same time.

I believe I've said enough about the build and quality of the guitar in my opening remarks but here just let me say that little things, such as the trapeze tailpiece and the strap buttons, are unique to Rickenbacker and give the instrument a real touch of class. So too does the subtle shaping of the back edges of the body. It looks great and makes the guitar more comfortable to carry.

The bottom line is that the 660 is a superb instrument that to my mind is actually under-priced by comparison with similar up-market Fenders, Gibsons and Gretschs.
I've lived with it now for more than four months, playing it at home through a small tweed Fender and onstage through a 4 x 10 Fender De Ville. It has been utterly reliable, holds its tuning very well and has delighted my fellow band members and audiences with its look and its sound. Everybody who sees it ooohs and aaahs and makes mistakes guessing the model number. Only 1,000 TP signature 12-strings were made. I suspect there are not many more six-string versions in existence either but Rickenbacker themselves can give you the score on that. The guitar has "collectable" written all over it but I don't think I'll be around 30 years from now when someone, somewhere will be paying big bucks for this beauty. It's not a guitar for all seasons, it's something of an acquired taste but hey, if you like Guinness and oysters you like Guinness and oysters. Me? I'm a Guinness and oysters man and this is American guitar building at its very finest. You won't find anything better coming out of Corona, Montana or Nashville and the only way to go from here is into the esoteric realms of the boutique builder. I might do that for a Strat or a Tele - both can be improved on - but a Ric is a Ric. It just doesn't get any better.