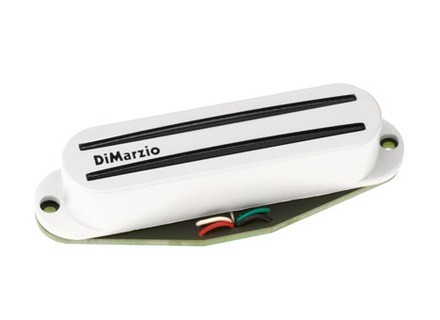 All user reviews for the DiMarzio DP189 The Tone Zone S

Average Score:4.5( 4.5/5 based on 8 reviews )
Value For Money : Excellent
Not satisfied with those reviews?
Our members also liked:

DiMarzio DP189 The Tone Zone S
4
Dimarzio is a modern pickup maker and they are known for that. The Tone Zone is one of their most unique designs. Dimarzio is known for their modern sounds and the Tone Zone has one of the most modern sounds of their line up.  The Tone Zone came out in 1991 and immediately was known for its vowel like open wah sound. There is a story going around that EVH helped design the pickup and I tend to believe this. When you play with it in the bridge you cant help but think of those 80s metal tones with the loads of chorus on them. In the bridge position of a guitar with a brighter wood it would be really good for 80s metal or even modern metal when used with the right amp and rig. This is the Tone Zone shrunk down into a single coil size. You still get all the crazy tone but with a slightly different voicing to compensate for the fact that it will be in a strat. Also when Dimarzio makes the single coil sized humbuckers they almost always use ceramic magnets even If the original pickup didnt have them, so the sound ends up being slightly different in that way as well. You get a ton of mid range with this pickup. This goes along with tons of crazy harmonics that this pickup gives out. It is like a Dimarzio FRED but not as crazy. I found the FRED almost unusable because of all the extra sounds that it put out but the Tone Zone has just the right amount of extra character. If you are looking for the cool Tone Zone sound in your strat here is an easy way to get close without cutting up your guitar. I would recommend just getting a new pickguard and putting in a real Tone Zone because this single coil while close does not get the exact Tone Zone sound.

If you’ve never used the Tone Zone before, it’s a very bass and midrange heavy pickup. This pickup works great for fattening something up while still giving it some touch sensitivity. Paul Gilbert used the Tone Zone for quite a long time, and it’s featured on a good portion of his solo albums.

The low end is very fat. The wound strings sound huge while the treble strings never thin out. The boosted midrange makes this thing have some really nice harmonics and helps overdrive the amp a bit. It’s a fairly compressed pickup, and it’s very sensitive to both wood choice and pickup height.

The biggest question you’re wondering is whether this thing sounds like the original Tone Zone. Well, it doesn’t sound exactly the same. For one, DiMarzio has this habit of using ceramic magnets in all the “clone” pickups. It creates a different sound and feel. The ceramic magnets make things a bit tighter and crisper. I find it loses some of that signature Tone Zone vibe. Simply put, it doesn’t sound as alive or as big. However, it’s still a cool pickup if you need to fatten up the guitar. Like the original, this pickup has a cocked wah kinda sound going on, so if you have a heavy midrange amp, you might want to watch out; things could get boxy sounding. It’s not bad split, and it’s not bad in parallel, but I find it sounds best in series.

If you’re looking at getting a single coil sized Tone Zone, your choices are pretty much limited to this pickup. If you want to test out a pickup to make your guitar fatter and give it tons of mids, this is probably your best bet. Just be sure to play with pickup height as this is a finicky pickup.
Did you find this review helpful?yesno

fabou13's review (This content has been automatically translated from French)" a huge, wonderful surprise!"

DiMarzio DP189 The Tone Zone S
5
I found it already mounted on an easel Mex Start that I bought the 2006 this summer 2010. I wanted a second guitar for my band. I thought it would be cold and microwave as well to the metal, well, not at all!

It is clear, modern but warm so perfect for playing in a record hard rock or heavy metal.

I put 10 because this microphone was really filled.

If you want a clear and warm it for you.

charly700's review (This content has been automatically translated from French)

If we could put a gradation

kurtophil's review (This content has been automatically translated from French)

DiMarzio DP189 The Tone Zone S
5
Not bad at all. These are the words that come direct tone, thinking of the area S. I birdge Mount position on a mustang. And frankly, I took a slap. It's my potato to give more, enormment more precision, with beautiful well rondent bass, mids and great, only regret, can not be chouilla not enough treble. This mic is really very good when you do not want or can not do trapping to put a full size.
I recommend it if you need more output and warmth. DiMarzio hat.

Hyde's review (This content has been automatically translated from French)

DiMarzio DP189 The Tone Zone S
5
Bridge installed on my home US, he has enhanced and diversified sound.
Seeking a humbucker format simple, I had first turned to the hot rail. But several weeks of waiting for the delivery made me leaning toward the tone zone. I "blamed" my strat missing a few niaque and low on the bridge pickup and Di Marzio gave me exactly what I wanted: the gain but not too low but not too much. Pile hair what I wanted.

Spanghy's review (This content has been automatically translated from French)

DiMarzio DP189 The Tone Zone S
5
It's been that sits on my old jackson soloist United States in the neck position (size guitar hss).

What I like most is the use in the clear where it is hot, provided biensur to limit the gain of the amplifier.

In full, it is very convenient, but it depends very much on the use that you show to your neck pickup.

Qqs leads to a little hot but it will be well forget the blues ...

Something important, this microphone has a lot of bass, so depending on your config 'it may be more or less relevant.

Anyway, on my config, it's a great neck pickup (although it took some digging because it is wider than a normal single coil) very useful if you do not have a place to ask humbucker.

In addition, a lower gain tone that the base area, so it is more versatile.

Another positive point: a gain sufficient to pass a large bridge humbucker tone zone s in without losing too much volume.

Sorry but I've never tested in the bridge position.
Did you find this review helpful?yesno

Fend.'s review (This content has been automatically translated from French)

DiMarzio DP189 The Tone Zone S
4
It possde normment bass, good midrange trs, trs well Submitted and little treble. It is far from aggressive as a microphone HS-6 example. It gives a big sound plutt clean. It is really trs trs prcis, compress enough (but not too!) And the grain is very modern and fairly smooth talking rendering "Hi-Fi". Some can see a perfect sound, the other a cold lack of life, or even charming personality. Sr is that it is not "rock'n'roll"!
With its standard output level, it is clearly orient mtal modern.
The palm-mute and stand are percuttant trs trs well.
It is also intended to modern shredders because lgato leave it alone and lack of personality made him one allows enough "neutral" after all.

It possde less bass output level and the "real" Tone Zone and that's good. It will fit in perfectly handle everything that will bring the Saddle slamming his acute lack of it will fail.

Virtual Vintage Heavy coupled a Blues in middle, the two pickups sound much more rock and roll for a given TRS returns it. The latter will bring clarity and attack and personality. Perfect for the big rock sound!
With everything I put in a ProTrack handle. It gives a Start compltement turns hyper versatile. Trs a good combination of pickups.