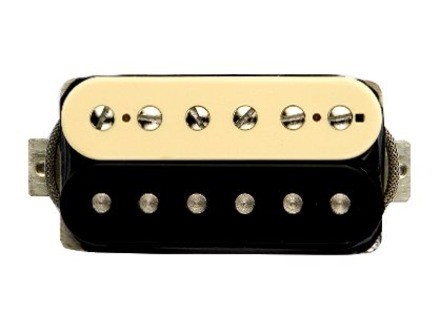 Grattouille33's review (This content has been automatically translated from French)" This is what I was looking for!"

Bare Knuckle Pickups VH II
5
It's been a month since I now ... I took cover in matt black version inning, two drivers on my Ibanez RG 3120 (given in D, and sometimes Drop Do when it's been too long that I did not shave ^ __ ^).

It replaces a Dimarzio AT-1 race. It really was not made for the neck position (too much midrange, not enough brightness), results, or the clear, nor does the distorted sound I liked. He will go in the bridge position on another guitar ...
In the meantime, I had the micro Dimarzio / Ibanez at first, I do not remember too much, and the SH-2 Jazz Seymour Duncan that I did not like (too thin, attack, even its clear).

Now, let's go to the heart of the matter. It is a micro, which certainly cost me more expensive than any other. But it is a micro handmade, depending on the options that I have chosen (oh lord That matte finish is awesome), I chose on the advice of the BKP team by email (do not hesitate to ask them questions, they will answer you in 24 hours maximum).

I wanted a microphone that is not too powerful, balanced in terms of frequency, which is the presence that is sweet, but who knows well transcribe the attack game pick or fingers (including the light).
And well, we can say that there is coming!

Being different from the AT-1, I first thought it was a little dug-level mediums, which I liked just for saturation, but let's first clear sound. Oh my god. What sound. What beauty ... He excels. It looks like a cross between single and dual microphone. Brightness, but also the transcription of the bass and the soft side, a little jazz. Agreements are suddenly meaningless.

And so, I touched my EQ on the amp (Mesa Boogie DC-5), and there, saturation, it was perfect. Everything was there: the attack, acute soft, but bright and present (that I do not rhythmic saturation with the neck pickup, as soli). I was looking for!

In short, many (myself included) are wondering whether it's worth it to buy Bare Knuckle. Go ahead. They have microphones to suit all tastes. I plan to buy a bridge pickup that will marry best with what VH-2 with the micro current (Dimarzio D-Sonic too high midrange).

So much for the advice. Bare Knuckle all the way!

PS: a small sound that you felt the microphone (and my skills guitaristic)
https://soundcloud.com/arthur-laborderie/green-tears

Bare Knuckle Pickups VH II
5
Bare Knuckle VHII, ordered in reverse zebra Tim: I first ordered, installed and tested for a Nailbomb remlacer the original microphone of my Musicman EVH, one of the first models. I had always found a lack of ... something, I do not know what a bit garish, dug a bit in the mids. The Nailbomb turned out to be blah on that scratch.
I contacted Tim at BKP to me has changed gratos (excluding the return of the NB port and port again) against a ... VHII which turns out to be a super micro crazy, very dynamic rock.

The sound is full, with zaigus that cut well, but not painful. The present without too much mids, bass dry. This is not a micro metal, but a model rock, very ... Van Halen of course, but not limited to: Slash appetite period, or period Rebel Yell Steve Stevens, really bad. Filled with harmonic output level not high. It reminds me of a Duncan aph1 Slash-b much better, both more bad boy and more balanced.

A micro super sharp, wicked and rock'n roll, full and present in the mix. Open sound and edge that does not compress. The real juicy ... Looks like we added a loudness to the amp, or a veil has been removed before the cabinet .... It is clearer, more defined, more warm. Great!

After, talk about money with a microphone at the price of entry-level guitar, it does not make sense.
The quality is there, it's net. Leprix we forget, or at least we do with, and accepts it.
Standard exchange because I'm an annoying customer who received the first model does not appeal, the model made the request: I need a reverse zebra, short legs and rounded like a Dimarzio. It is tailor-made, real luxury, with the whole debate is this helpful etc ... , I understand but I chose to try and I'm happy.

I am super happy with the sound (this is the goal, right?), Over fishing and more balance, more so now that the original mic, already very good.

So I put a 10, because the question I asked myself, it does it hurts me in the ass, a € 140 microphone? Guitar in the amp, I'm happy spending!

The BKP are able *** microphones that sound (I tried the mule bridge and neck, the Nailbomb bridge, the bridge and vhII neck, the neck Stormy Monday).
The only ones who take the comparison (according to my tastes ...), it is the old Gibson and HBL HBR, wonders. But this skyscraper, the VHII is better than the HB.

Really trying at least once.
Tim is very responsive and friendly, and meets the fourth time.

Yes, I would do this choice, super quality stuff.

edit of 02.06.2011: good, moved my EVH to be installed on a PRS McCarthy: a real massacre, the treble is now under control (thank you lutherie PRS), super nice midrange, the Hot vintage (the name is accurate BKP) really nasty, Rn'R a treat. Acute or intermediate positions splittées sumptuous, highly p90.

My advice to death, with the release handle for a powerful guitar rock, or a mule for a more vintage. In both cases, it's great.
Super Micro. You will not be disappointed.