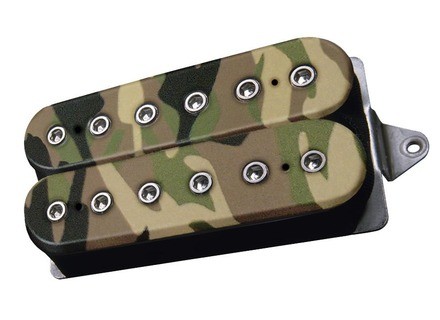 DiMarzio DP159 Evolution Bridge
4
Steve Vai hooked up with Dimarzio a few years ago to create Steves ultimate pickup. Two years later they unveiled the Dimarzio Evolution pickup or EVO for short. The EVO features a 4 conductor wiring setup connected to a pickup with ceramic magnets. It has Dimarzios dual-resonance configuration which they claim produces more harmonic overtones than the conventional pickup. Vai wanted a particular sound from the pickup and the proof is in the results. The EVO produces a tone that is uniquely Steve Vai, but this may not mean its a good tone for you. The pickup is voiced to exaggerate the high end and mids. If you are having trouble cutting through your bands mix this pickup will cut through like a samurai sword but cutting through the mix and actually sounding good may be two different things. With the pickup itself balanced so far towards the high end it make make some guitars unsuitable for it. Putting this pickup in any guitar made of bright wood may result in some unpleasant tones. Even if you put it in a guitar with the right kind of wood that balances out the tone your amp may not be suitable for it. The modern high end sound may not work with some amps such as Marshalls or older style amps. When these amps were designed the guitar pickups at the time were low output and not voiced for the frequencies the Evolution is voiced for. The pick up may not even work with some players. Because it is so clear and defined mistakes that you can get away with on other guitars may come through loud and clear with the EVO. So if you just got to have the sharpest, most precise pickup on the market and have the skills and gear to support it, the EVO pickup may be the one for you.
Did you find this review helpful?yesno
»

DiMarzio DP159 Evolution Bridge
4
The Evolution Bridge pickup was a humbucker created for Steve Vai and his signature Ibanez Jem guitars. Unlike the neck, this is a full on high output pickup that’ll drive nearly any amp into overdrive. Evolution is a big of a misnomer as this pickup doesn’t really sound like an evolution fo the PAF like the neck pickup is. It has its own little vibe going on, and it tends to be a very love/hate pickup. Like nearly all DiMarzio pickups, this comes standard with four conductor wiring, allen head bolts on both coils and a ceramic magnet. The ceramic magnet is part of this pickup’s secret. I’ll get to that later.

The DiMarzio Evolution Bridge is a pickup for those wanting very high output, note clarity, insane harmonics and a screaming tone. If you’re a sloppy player, you’ll probably hate this pickup. It has tons of note detail, so it’ll show any little mistake you might make. It’s very compressed and doesn’t clean up that great, so it’s actually probably better suited towards heavy metal players than anything else. The lows are extremely tight, the highs have a strong bite and the mids are very strong. Split coil sounds are pretty good with this, so I recommend trying those out if you have a push/pull pot or some other way of splitting it. A lot of people compare this so an EMG 81, and I can see the similarities, but I think the Evolution Bridge is a bit more organic sounding and actually a touch less compressed.

Steve Vai and DiMarzio tend to recommend this for guitars with alder bodies, and this is where a lot of people get their negativity towards this pickup. Because it’s a bright pickup, putting it in a neutral to bright tone wood will just overhype the frequencies and create a harsh situation. I recommend trying this in basswood or mahogany. Those woods tend to be the best suited for this pickup.
Did you find this review helpful?yesno
»

DiMarzio DP159 Evolution Bridge
4
The Evolution bridge pickup by DiMarzio is a the outcome of the Steve Vai's very high demands as a player who knows exactly what he wants in a piece of gear. DiMarzio built the Evo to his specs and the result is a searing and sharp sounding humbucker with lots of output and harmonic content.

The pup is very tight in the low end, and not much low end is actually produced. It's not thin however, as riffs stay chunky with just enough girth. The high end is very present and almost shrill, but never quite becomes unpleasant. This pickup was made mainly for soloing when the guitarist must cut through the mix and be heard. I find that I like the pickup for tight rhythm playing just as much as shredding however.
The pickup has lots of harmonic overtones and a very lively sound. It will NOT hide sloppy playing, so be prepared to bring the chops with this one!

I think of this pickup as being an "acquired taste" and I don't think it works well with all gear. For example, it's too bright and thin to be played into a Marshall and V30's. A JCM 800 and Marshall cab with 75s was also a bit piercing and over the top in the upper mids, but better than the Marshall/V30 combo. However, this pup was right at home with a Boogie Mark IV, and even more so in my Dual Rectifier. The Rectifier's big low end countered the pickup's tight and somewhat thin low end to produce amazing hard rock and metal rhythm sounds! With the pup installed in my Les Paul and playing through the Vintage channel on the recto, I was getting tones that made my EMGs sound lifeless and stale. Not to mention, the Evo can get pretty good clean tones which surprised me.

As a side note for Mesa Boogie users, and especially rectifier users; ceramic pickups seem to sound smoother for some reason with these amps. Usually alnico magnets produce a softer sound, but with the recto ceramics just hold together better and sound smoother.

Overall, I'd recommend this pickup if you have a dark sounding amp or a thick guitar such as a Les Paul, and want to be heard and challenged as a player!
Did you find this review helpful?yesno
»

Adopt Steve Vai, more rput for his solos shredder for his passion for occarina and chamber music.

Rhythmic, it's something else. In clean, one picks up a treble graillon garish, in short not pleasant at all, less than curb it vigorously with EQ and a bit of chorus.

In rhythmic saturated b'en is so so also: big rock, a happening, but ds that EQ is found to nurse hairpin (large hollow in mdiums), it does not comfortable, not suited what.

Steve Vai has raided other less extreme microphones, "The Breed" DP166 (bridge) and DP165 (neck). Less extreme, but that's not the models "Jazz" ...

In conclusion, I think the Evo, over time, has an unpleasant personality. And it is not versatile. It sends the gain, but ... it is cold enough, not fabulous without clear effects, saturated it does its job, but it does not really me there is not enough "singing" .dropoff window

EMG 81 is far more frquentable (yes, that micro coldness of reputation is a blaze in compar Evo !!!).

A buy knowingly so.
Did you find this review helpful?yesno
»
Read the 15 user reviews on the DiMarzio DP159 Evolution Bridge »