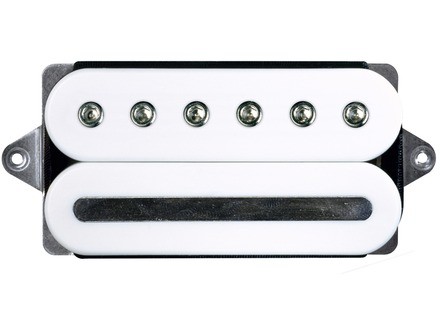 DiMarzio DP207 DropSonic
3
The Dropsonic was Dimarzios first try at a pickup like this. They now have several half rail half pole piece pickups but I believe this was the first one and it had some growing pains. Its assymetrical design means that depending on how it is oriented in your guitar it will sound quite different. The pickup is like one half x2n and the other half tone zone. It has ceramic magnets and the usual 4 conductor wiring. This pickup did have some growing pains. Being the first pickup of this type it had plenty of problems. It is noted for being super noisy like an old EMG 58 or something. You wouldnt expect a pickup this noisy to be sold nowadays. Even with being noisy it was still pretty popular among guitar players. Petrucci used them when they first came out in his guitars. He now uses a more updated evolution of the same slug and rail design pickup. It really does sound like an x2n mixed with a Tone Zone. The x2n is pretty bright and has decent high end so imagine that mixed with the crazy harmonics of the Tone Zone and you get this pickup. When installing this pickup just imagine the rail part of the pickup the hotter part. If you place the hot end towards the bridge on your guitar you will get a more trebley sound. If you place it towards the neck you get a fatter but also muddier sound. It all depends on what you want. Having an assymetrical design like this kinda makes it two pickups in one. I did not try it in the neck position but I doubt it is any good there. I also did not try the split tones from this pickup. With its design I bet the split tones are either really good or really bad. If you are looking at this pickup I suggest you check out the Crunch Lab also. It is this pickup but more refined and not as noisy.
Did you find this review helpful?yesno
»

The D-Sonic is one of those pickups that seems like an experiment more than anything. Earlier, I referred to it being similar to an X2N and a Tone Zone put together, and it’s really similar to that. It’s a very high output pickup, but it’s very noisy. I have no clue why DiMarzio released such a noisy pickup. The pickup itself is fairly even in tone except for this upper treble bite. That treble bite is ultimate what lead me to dislike this pickup.

Most people who try this are going to try it in basswood. After all, that’s what John Petrucci first used it in. However, I can firmly say that this pickup doesn’t sound that great in basswood. The treble is amplified in a way that it becomes almost grating. The evenness of the pickup also leads it to have no flavor at all. Keep in mind, this is all with the bar facing towards the bridge. With the bar towards the neck, it sounds pretty fat and is fairly clear. However, you then have this issue of it sounding really bad when it’s split.

To me, this pickup is more suited towards mahogany. In fact, it’s a great match with a mahogany body and a rosewood fretboard. These help warm it up enough to give it character while having everything sound fairly clean. If you’re going to try out this pickup, be sure to watch your noise levels. It’s very sensitive to lights and other electric signals that pickups might pick up.
Did you find this review helpful?yesno
»

DiMarzio DP207 DropSonic
4
Mounted on a ebmm JP6
The d-sonic is one step higher than the tone zone: précision, modern sound. Great pickup for distorted rythms and solos.
You have two ways of installation: if you have heavy gauges strings or drop tunings you can install the pickup with the blade towards the bridge. If you play with standard tuning and strings, put the pickup the opposite way, (it increases the mids for a shredder oriented sound)
I have also played on dimarzio Steve's special, Evolution, Tone zone, Seymour duncan JB, EMG 81, EMG 85...
an excellent pickup for métal
Did you find this review helpful?yesno
»

goldorack's review (This content has been automatically translated from French)

DiMarzio DP207 DropSonic
4
Big humbucker output level and raisin bread magnets, designed by DiMarzio for the Linkin Park guitarist Brad Delson. (I'm not really a fan of LP, but the sound of guitars is not bad). In addition, as a fan of John Petrucci, I saw a pair of pictures on a forum amricain o he was seen with his musicman and a d-sonic in the bridge position. So I said we should give him a chance this microphone! The two coils of the micro diffrent are seen as little as one dlivre prcis a ct and a bit sharp (the barrette, place rack in ct low tuning) and the other gives a warmer ct for solos and normal tuning (adjustable pads), basically. By distortion, I test the two: it fulfills its rle in low tuning (all the strings I dtest moles tunings too low, I'm happy to go -1 ton) The prcis sound, even if it is not incredible to the ears, not excessively aggressive, well equilibrated. Its precision ratrappe hair using this mic on a guitar mahogany for example. Beware prjugs: IT DOES NOT SOUND LIKE THE EDGE EVO. In standart tuning, it is also giving a full, big, full bodied but also sharp enough to shred. For clean sounds, it is good, (although Splitt sr) but I think that this is not a need to choose, as is the fact that we should not take it exclusively for low because the tune is subtle diffrence. This is a good microphone to the modern is versatile, enjoyable play rhythm as a solo for the metal. It's kind of good compromise between tone zone and steve's special.
Did you find this review helpful?yesno
»
Read the 14 user reviews on the DiMarzio DP207 DropSonic »