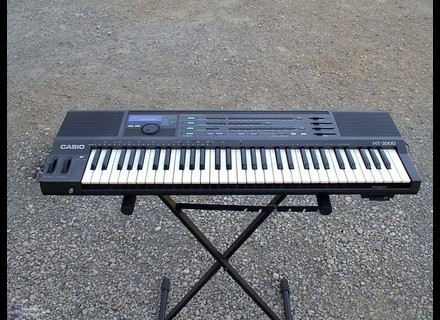 All user reviews for the Casio HT3000

Jay f.'s review (This content has been automatically translated from French)

Connection MIDI IN / OUT / THRU
The first review gives features. More on the Wikipedia page dedicated: https://en.wikipedia.org/wiki/Casio_SD_Synthesizers

Edit or sequencer sounds quite complicated, given the limitations of the small screen.
Using the encoder very playful.

The synthesis is based on 1-DCO-VCF DCA voice. 32 waveforms can be generated by the COD, including a noise generator fun.

The sounds are pretty basic, not at all realistic. Only percussion and metallic sounds are correctly rendered and interesting. Strings and synth basses are pretty good too.
For an affordable synth 80s, it is very good. But it is light years away from the modern equivalent.

The keyboard is not velocity sensitive.

I have since the late 80s.
It was my first synth.

The machine is very robust. It drags in a corner, but still works.

I enjoyed the editability of the machine and the fact that it is splittable.
For cons, the sounds are annoying very quickly. When I could, I completed a SoundCanvas to provide better sound quality.

Tyokkann's review (This content has been automatically translated from French)

Editing sounds: SETTING THE dtail of the synthse

Configuration very simple and intuitive trs once you have entered the system.
The select sounds and styles prprogramms trs is fast.
For the edition of sounds and effects all done with 4 button, the wheel and the digital screen (the numrique what ...) and there really is not rocket science.
This keyboard s'avre also be an excellent 61-key keyboard matre MIDI implmentation complte his grace.
I never had man hands and cel did not lack at all.

Ideal for learning, beginners in keyboard or for experienced but especially for fans of synthse rtro. This is an excellent compromise between arranger and synthtiseur.
Excellent sound quality, but sounds really rtros extras! So just sounds trs ralistes but silent this the goal of the 80 keyboards ????????
This keyboard is perfect for any style of music electronics, personal I used to make the atmosphere, but for fans of the electro 80's / 90's it is really IDAL.
The effects are not bad, sometimes a little too pousss you rgler them well.
My sound prfr on this machine is the "synth-bells" with the modulation trigger and put back!! gives a sound came from elsewhere and really too good for a support agreement in a piece of ambient.
Attention to the followers of the sensitivity and aftertouch-this keyboard does possde neither one of these functions!
I had a Casio HT-3000 for 6 months, then I replaced the HZ-600, a synthetic numrique released the same year that is actually part synthtisation numrique of HT-3000! tell you how it sounds rtro of these keyboards I liked.
Trs often I change gear (that I had to work only with the opportunity) and I admit that I was surprised by his tone that suited the electro-exprimental, the atmosphere, the electro 80's or 90's.
In short a good little machine that made us the Casio trs not known, even quasi inaperue password, which is a shame because it is interesting.
If there is one thing I least AIM on this keyboard is precisely the lack of VLOC.
With the exprience I will try to nab A model with sensitivity of the keys, but it's even harder to find ............