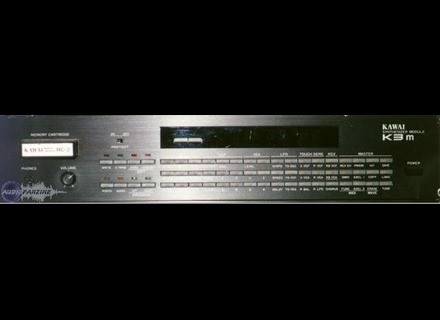 zedbee's review (This content has been automatically translated from French)

Kawai K3M
5
k3 rack version of following the same synthesis engine.
generators wave two in number are based on wavetable whose choice is quite special.
quality of synthesis is relatively cheap, cons by a real analog filter.
all orders are digitally controlled in the great traditions of the machines of the time

50 buttons aligned, which at first repelled. but in fact everything is very efficient, they are used for presets, or to select parameters to edit sound. it's really well thought out. the display is more than basic, but they're going very well.

the real weak point ...
but especially strong point of this synth ....

the sound is pretty dated, really year 80. the wave tables are of very poor quality, it recognizes the hard core piano, a brass, or a violin. but suddenly it does not sound synthetic analog or digital synth. here's no big way waldorf but what joy when we search for original sounds. aquifers are falling down, felted, silky, and place themselves as a flower in the mix. the rest is a bit more anecdotal but it can really sound out "outside the battus.il there is nothing comparable in other brands, I believe neither in kawai ... Although this is the wave tables, nothing to do with K1 or K4 brand. So a sort of UFO.

as I said, the sound is really special, and my tastes absolutely awesome.
a machine rather difficult to find, especially in a rack.

If I had to bring another synth, I'd say JX8P roland. But the choice of the wavetable in fact a single machine, which is neither an analog or a sample player. Atypical for a hybrid tone, which generates the webs finest I have ever encountered. one machine at a very low rating given that it is truly unique.
I bought this machine on a whim, and I must say that this day, I really did not take me because she became a fixture in my compositions.

a small addition after prolonged use, the wavetable tend to give a sound that approximates the PPG sounds ...


16 of 17 people found this review helpful

Listen to the 12 audio files about Kawai K3M »

Kawai K3M manuals and other files