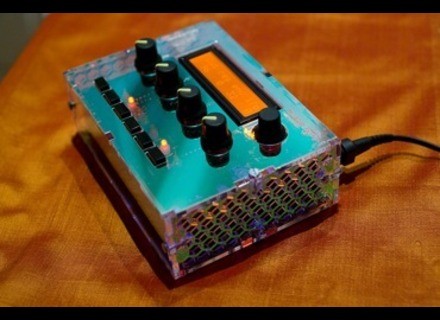 Shruthi-1, Hybrid synthesizer from Mutable Instruments in the Shruthi series.

Mutable Instruments Shruthi-1
4
Synthe mono / duophonic
2 digital wavetable osc
1 sub osc
1 noise generator
filter 2/4 pole analog
2 LFO, two envelope
can choose another filter (4 or 5 in total) analog or digital, available in separate kit or self-assembly
in / or audio (in => filter input)
in / out midi (out => thru twelve o'clock or use the synth as midi sequencer)

Simple config first glance, but many possibilities:
16 step sequencer with MIDI sync
arpeggiator with multiple play modes (see site)
possibility of very wide modulation (modulated on a little bit close all by anything)
possibility of two combined modulation sources (addition, subtraction ...)
plenty of other things to discover on the site mutable instruments

synthesizer very easy to use due to the fact that each button is located at the bottom of the screen selects one edit page (osc, filter, modulation etc ...)

super easy to set up, the references of the component directly listed on the pcb (which is also of excellent quality)

digital osc but a very good sound quality (no aliasing), many waveforms (classic square, saw, tri) adjustable thanks to a knob (see website)
super filter resonance but not too aggressive.
reactive envelope with great flexibility
a lot of control over the LFO (attack, master / slave)

use for 2 years has little meadows
in other synth I korg ms 2000, p 900 analog and massive, 20 ms, in minimoog vst.
Very good value for money at this price it outperforms most synth below 400euros in terms of ability (modulation, wavetable, 2lfo, 2 envelope)

Barrin's review (This content has been automatically translated from French)" A small ravenous beast!"

Mutable Instruments Shruthi-1
4
I bought the kit version of Do It Yourself.

Powered via 9V battery or via an AC adapter 9V DC pedal kind.

It must be able to solder electronic components correctly. If there are sellers who offer the version that is already installed all but the price is higher.
Personally I started in welding, I'm a complete beginner and everything went pretty well.

The manufacturer's website provides all the information to be welded same (diagrams to support).

The sounds are really good. This is a hybrid analog / digital. I find my account.

It produces very big sounds you wonder where it comes out to see the small size of the module.

Personally I suggest you opt for acrylic housings of the parent company, they are very well finished.

I have a few months.

I bought it on a whim because I wanted to get into the DIY kit and I confess that I do not regret. But if you start first start with simpler and cheaper modules. History of making your teeth

very good value for money, especially if you take the kit to be up even. it takes a little time, patience and attention to detail but what satisfaction play a isntrument be even we did!

Mutable Instruments Shruthi-1
4
This microsynthé comes in a small box to put on the table. It can of course be integrated into the desired box as it is DIY.
It is full of possibilities. Editing is basically a LCD type commands push button and knob. Although very well designed, I plan a BCR 2000 for control via MIDI.
Map filter be changed for some other sounds.

The general configuration is simple. for me the editing parameters is not intuitive enough, I prefer the approach effect = a button (but that is only my opinion).
Manual available on the site is mutable in English and I allergise.

The sounds are interesting. They are very digital. This is a synth sound design oriented so the goal is not to have realistic sounds. Sound creation possibilities are extensive.
I have not checked the velocity and after touch. I use associated with a Dark Time.

I use it for a year. The interest of this synth is its versatility, size and price.
I use it in my set up consists mainly of Doepfer modules.
It is very good value for money. If I had to do, I do it again this choice.

Seed Barrette's review (This content has been automatically translated from French)"Beautiful, overkill, and not expensive"

Mutable Instruments Shruthi-1
5
Features:
For specifications I invite you to notice even the choquette a little lower or directly on the site Mutable Instrument, everything is said. Basically an audio in, one out, one afternoon in an out / thrue, 5 knobs, one with endless race, 6 push buttons, 8 LEDs and a screen in a transparent plexiglass box toutit, strong good looks, it see the components is rather fun. Therein was 2 oscilloscope with 18 waveforms, a sub with 11 waveforms, a generator of clicks and a white noise generator, all this is mixed and then sent to the analog filter, then to the amp.

Use:
Considering it's quality, consumers and big companies should take notice: the ergonomics of the Shruti is a model of clarity, simplicity and efficiency!
The general setup is hyper thoughtful, extremely simple and intuitive: with only a quick glance at the manual you'll understand the architecture of the beast and know what buttons and knobs are assigned and go. With only five knobs and 6 push buttons you have access to all parameters of synthesis, very quickly and soon you'll understand how it is a treat. I'm not very knowledgeable in summary, I have not had that before microkorg and full of vsti. Compared to microkorg and 4 knobs for sound editing is really a piece of cake. there are plugs to edit sounds on the PC but I have not tested yet. My pc, I edit with nanoKONTROL and it works very well.
The only thing that takes a bit of reading is the use of sequencers, there are several and Arpegio, and again, it is very simple and well thought out. I have started to make use of it last night and I already broke, it&#39;s huge and full of so many possibilities that it will take some time before making the turn.
The French manual is available here:
It is clear, complete, easy to understand.

Sound:
The sound ... ah there is huge too! incomparable with the microkorg and multiple vsti I have. This is not realistic in the sense na ca not intended to mimic real instrumentals, but what is good. I am far from having been around but it was in the belly of the huge bass and good fats, which leads rip all terrible and fx sounds from elsewhere.
It has 20 modulation sources among which the step sequencer and Arpegio to connect to 16 destinations possible to create a total of 12 modulations max!
No sound that I hate, it&#39;s really good. Obviously there are presets that I do not like it enough to edit a little or totally. The bank is big enough and invited to create its own patches, it is the goal of this kind of synths.

Interest:
It is a marvel. I am convinced he will not leave my set time soon. This is a great tool for creating, very playful and very powerful, which is more chainable to enjoy polyphony.
It&#39;s been a little over a year I was looking for a real analog for my home studio, I watched a moment analog oven is another budget but it is also very attractive, the Minitaur, the MiniBrute then morpho which seemed ideal given the possibilities and unbeatable price compared to minitaure and MiniBrute. I tried the little phatty in stores, as well as the monotribe, but nothing approaching. Obviously I loved the Little phatty but it has nothing to see and it&#39;s not the same budget either. The ideal would be to have the built in carcass Phatty with its keyboard and knobs Shruti as did a German. (Shame he does not sell his product, ca would be huge!) Then I discovered by chance DIY Mutable Instrument and Shruti and able to have accessed more videos as I could, that the one can not try it in the store, after having listened to the sounds on soundcloud I thought I would try the experience ... and I was absolutely right! On second thought, now I much prefer a 4 shrutis analog oven. For a roughly the same price (I have mine mounted by Micmicman, address on the site of MI, very well mounted, the guy is super nice, very responsive, answering questions in the day, and it is 100 euros more so it makes the Shruti to 300 euros, only slightly less than the morpho dektop it seems!) was a true polyphony and 4 audio outputs.
I love the month actually is that I&#39;m already addicted and more seriously, but it is a detail, the only thing that bothers me a bit is the abscence of switch on / off. Otherwise, there&#39;s nothing to throw away, it&#39;s like the pig, everything is good!
The value for money: unbeatable, especially as the morpho (the only one that is comparable in terms of both price opportunities) air to be incohérant or at least odd mode polychain what seems Does not the case schruti1.
I do it again this choice with his eyes closed, moreover I intend to buy another one at least with a different filter and its big brother the Anushri a polyphonic 6 channels, the top of analog .....! !
I recommend it very highly to anyone who likes to edit their sound, as already mentioned extremely simple for those who have the basics of synthesis, cheaper than any other, designed by a french it asset to please and it takes more no place: you can play in your living room, the c .. resting on the couch, the shruti on your knees, ready to spend the afternoon or night to have fun

Did you find this review helpful?yesno
»
Read the 10 user reviews on the Mutable Instruments Shruthi-1 »