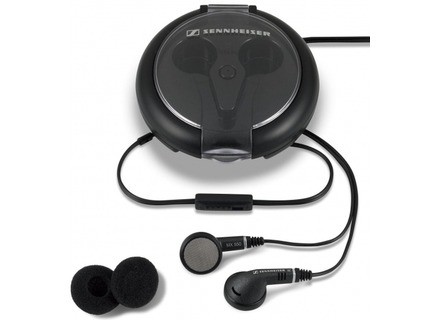 MX 550, In-ear or ear-Pad monitor from Sennheiser in the MX series.

yagp's review (This content has been automatically translated from French)

Sennheiser MX 550
1
I used these headphones for 2 weeks.

They work well (I used them on an mp3 player and my laptop), but they have an unpleasant feature: the headphone cable is a very foul smell (to say things more clearly, it really stinks cable). You do not realize outdoors, but the smell of this cable is very noticeable after a few minutes in a closed room.

Of the 4 headphones or earphones I bought these two years, is the first time that I come across such a case. I tried to have an exchange with France sennheiser about it, in vain. I did not cast (AC will soon) but I no longer use my earphones MX 550.

In view of the fatally flawed, I consider the price / quality ratio is bad (unless it has a stuffy nose). I give 2 / 10 to 550 MX: from sennheiser, I expected a more serious control of the materials used.
Did you find this review helpful?yesno
»

scrabz's review (This content has been automatically translated from French)

Sennheiser MX 550
2
You should not just dip your cable into the mayonnaise out of date and time?
For my part I use them for several months with no real problems
I expected more from seinheiser (especially for a € 25 headphones) but they are still in good order.

The Pros: low-medium-present but very well defined, for someone who does not like to be overwhelmed by the bass, the sound it quite corespondra.
-The present volume settings on the headphone
-The cable is securely attached units of the earphone (sse setting does not amount to the only solder terminals) and finally the jack instead of the old right angle into the pocket faitchier)

The least: - (for me) low enough presents
The volume-control could have been much more careful (at a time when it cracked but it does more, and a certain lack of precision in the control)
-Distorted treble has a volume that is honest for mio (now this may be my ears are starting to fail ...)

In short, the price is a little unfortunate to have a product like this. The sound is really huge qand music is very good quality (like mp3 or 320Kpbs Lossless) and we feel really good resonance and we feel that the listener reacts really well. I think these headphones are made for perceived (a pink martini with these headphones and go) rather than rock and the sound is quite deformed in the end.
Did you find this review helpful?yesno
»

maxabbey's review (This content has been automatically translated from French)

Sennheiser MX 550
3
I used these headphones for about two years with my MP3 player. They came to replace a pair of Sony headphones with volume control that I loved, but unfortunately I lost. Can not remember the reference of the Sony, bought € 16 at Fnac ...

Compared to these, the Sennheiser MX-550 had a sound a little better defined, especially in the treble, it's not the earphones for bass lovers ... but outside of her, I kept my regret a preference for Sony, which, while cheaper, had a volume control much more precise (that awful slide button on the MX-550 becomes less and less accurate at over time), a cable a little longer (if I remember correctly) and especially ... thicker!

Yes, because what made me part with the MX-550 is their fragility: the cable is ridiculously late. Admittedly, I have still not misused for 2 years, but despite the care taken in every time I ranks, they ended up being victims of false contacts, such as an ordinary pair of headphones two to three times less dear ... shame.

For € 20, I have not bothered to return them as collateral, it would have been costly in postage, especially without the guarantee that the Sennheiser would trade me for what they could consider wear or mishandling on my part. In addition, Sony was always my nickel when I lost.

Maybe I made a mistake: I did not perhaps used enough of their storage box, which might have helped to prolong their life. But then their storage box is really ... need: clear plastic as fragile as that of an animal enclosure at CD, I doubt she would have survived if only a dozen successive storage.

I would do this choice? Hmm ... Certainly, the sound was slightly better than my Sony (but really a tad), but that's all. For everything else, the price difference was not justified in my eyes. My advice? If you can find cheaper with the same features at Sony, it would certainly be a better choice. But it may have changed since ...

Anyway, now I use Shure E2c, and it's a different world. Of course, they are 3-4 times more expensive, but the sound quality and production is infinitely superior, not least at the level of the length and thickness of the cable, or quality of their box ultra-rigid storage.

Other Sennheiser in-ear and ear-pads monitors