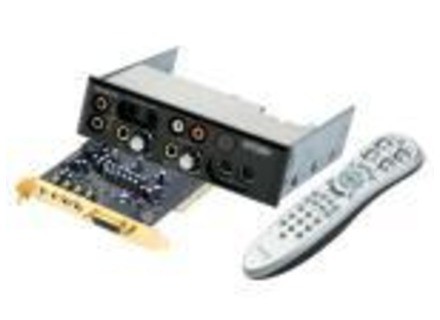 Herve C's review (This content has been automatically translated from French)

Creative Labs X-Fi Platinum
4
I was looking for a sound card with ASIO driver to use a piano VSTi (see my opinion on "The Grand 2").
I took the platinum to easily plug in my cable noon (in faade).

I chose this card because it is also used for gaming and home-cinma, which is a sign of respect prnit drivers. And since I use Linux on my other PC, I hope that drivers will cres for this OS at some future time.

I also use this card to listen to my music (in Ogg Vorbis), the sound is wonderful (thank you to the CMS-3D amliore costs at the headphone).

No problem installing the driver (you must download any latest drivers from Creative).

The console "music" is complex trs, I did not take the time to learn to use it. I do not use effects Intgr the map.

I use a lot of very practical function "Save what you hear," which allows me to CRER an MP3 that I play the fly, without having to open a squenceur.

Even when a regret: the drivers do not support the standby continues. I lose the sound if I use it.

This card can be bought both for music and for the cost (versatile).

One regret: the CMS-3D does not work in "Fast Fashion music." And in "Home-cinma," the ASIO driver is unusable. Even when I tried the CMS-3D with a piano VSTi: feedback awful, monstrous latency. In short, do not count on it.

I also saw in the forum users complain about the ASIO driver. In heavy use, was not worth may not be a pro card. But to play a VSTi, it's perfect.
Did you find this review helpful?yesno
»

ddinside's review (This content has been automatically translated from French)

I do not use all the great benefits of creative vendors. It gives me the map of computer music poor like me.

Many connections is significant even if everything is not usable at the same time.

Implementation easy: I plugged in, downloaded and installed the drivers on the creative site and presto, it works.
I use Cubase. We see all the connections. The analog inputs are not bad. The quality is probably not up to the card pros, but we can already have fun. I took my battery with five microphones on the PC. Not bad. For cons, I was not able to manipulate the output as I wanted. I wanted to set the hearing, a headphone output and external audio effects but the output did not respond as I will have wanted. It's a shame but that's not a super pro card. Already, the analog inputs operate in parallel, the luxury. The digital inputs take the place of other analog inputs when used while Cubase see them clearly.

The internal effects are not very good, for against, the internal synth sounds attractive to some. Worth to look at it.

Compatilibité no problems to note. The configuration depends more on the software used the card itself. For my part, I use Cubase SX3. Well what is cubase.

The drivers are fairly stable. Freezer I had two or three times a year, and again I'm not sure whether it is because of this even though I was using cubase.
I am forced to disable the effects and other vsti while I record to lower the latency to 5 ms (below, it picks up). During the mix, I set the latency to 100ms to be quiet. Obviously, one should not expect miracles either, but for my use, I am quite pleased.

I plan to use the ubuntu studio linux distribution that looks to defend a lot in computer music Unfortunately, Linux users, you will be confronted with the lack of drivers for linux. No module is compatible at this time (well, I have not found anyway). That said, for less than 150 euros, have almost 6 analog I / O connection with such a rack and the front is really impressive. The DSP is not the most efficient in the world, but at this price, beginners computer music may darken. It defends itself and the card is fully multi-use.
I also tested a card audiomedia3. Certainly it has nothing to do. And there, I plan to buy M-Audio Delta 1010 for 8 I / O and access to 96kHz (44kHz I work with the SB) for my requirements in terms of sound quality have increased slightly. That said, I do it again this choice without any problems. This card is intended for affordable and begin Music is really nice to have this connection and this DSP. It's really cool from creative to have made a card with so many possibilities at this price point. I earnestly advise.
Did you find this review helpful?yesno
»