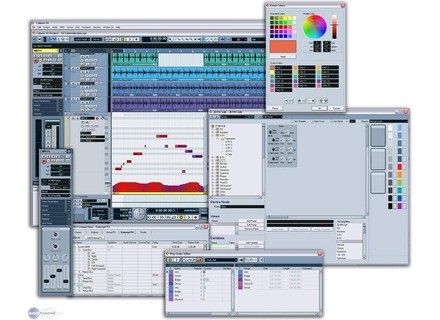 Steinberg Cubase SX 3
4
Steinbergs Cubase sx3 is a great program for audio production. You will be able to compose great songs with the Cubase line of software. I have been using Cubase sx3 for a while now and its very similar to the other versions of Cubase software. I ran it on a windows xp computer with 3gigs and it ran very well and fast.

Most of the stock sounds that come with the program I didn’t use. I am never a fan of the stock sounds that most programs come with because most of them sound thin and not full and well rounded. But after purchasing a few racks I was right in the mix and started making great music. I love the midi control with this program you can sync all of your gear up right away and very easy. Not too mention the ability to edit your midi notes, which is very easy.

Overall it’s a powerful program but in my opinion since I wasn’t using any stock sounds and rewiring fl studio into this program there really wasn’t too much of a need for the program its self. Most other high quality music production software’s are just like this one, and for the price its about the same as all of the other softwares. But Cubase continues to come out with upgrades and keep improving on the product that they put out so hopefully they will find a way to separate themselves from all of the other midi softwares that are on the market today. I suggest trying other softwares if you are just starting out though, they navigation through Cubase sx3 can get to be a bit overwhelming if you are new to it. But if you are a vet and understand programs like these then Cubase sx3 will work perfect for you and you will be creating music in no time.
Did you find this review helpful?yesno
»

Steinberg Cubase SX 3
5
I had absolutely no compatibly issues with Cubase, it works perfectly with my windows computer and can be rewired with fl studio and a few other smaller programs that I use. The instruction manual will give you everything you need to get up and running and to get started without a single problem. So definitely read your manuals because at first Cubase can be a little overwhelming if your coming from another program. But once you learn the basic of the program you will then automatically learn the more advanced stuff on your own.

The configuration of this software is very stable and I have had zero crashes since I started using it a year ago. I get a high performance out of this software and it used low CPU unlike other programs that will swallow your CPU hard! This software (cubase) also comes with some stock sounds and presets that will blow your mind. Its ready to create wonderful music right out of the box. Most of all the options you need to work your way through the program are right in front of you with the main menu options.

The best thing I like about this software is its compatibility with so many other programs, and you can rewire it or use it as a host. It comes ready right out of the box with industry standard sounds that other programs done come with. If I had to get back again, I would have chosen this software first over any other when I first started producing. This is my first go round with Cubase , but I am very satisfied with this product and I will continue to stay with them and upgrade to the next version or to every version for that matter when they come out. I definitely recommend this software to all producers.
Did you find this review helpful?yesno
»

Steinberg Cubase SX 3
5
I used Steinberg Cubase SX 3 for a brief while before I switched systems and changed over to Pro Tools a number of years ago.  I ran SX 2.0 for the most part, but also ran this version for a little while.  This version is now pretty outdated, but it does still float around there.  I didn't have any issues as far as installation goes, as it was a pretty simple process overall, however, after using it for a little while I did have some performance issues which I will speak more about in the next section.  As far as the interface of Cubase SX 3 goes, it is definitely better than its predecessor in 2.0.  It is easy to use and offers up a lot more features as well.  The manual for SX 3 is pretty complete, but I didn't need to consult it too often since it is a pretty easy piece of software to use.

When I ran Steinberg Cubase SX 3, I ran it on a Hewlett Packard Pavilion dv8000 lap top.  The computer had a 3.0 GHz single core processor and 2 GB of RAM.  I was also running SX 2.0 on the same system before I upgraded up.  However, I found that 3.0 wasn't as friendly in terms of performance as 2.0 was for whatever reason, which is part of the reason that I switched over to a Mac and now run Pro Tools.  Every so often I would get some error messages and the whole session would crash, which is definitely not something that I was interested.  I was able to recover the session afterward without a problem.  While it didn't happen often, it was often enough where it became annoying.  However, as far as the performance of the software in terms of speed, I was able to run the software just fine with a good amount of tracks and plug-ins...

While Steinberg Cubase SX 3 is definitely a powerful piece of software, if you're interested in a sequencer of this type, I'd recommend looking into the newer versions of Cubase.  Although I haven't used the new ones as extensively, they have a better interface and offer up more plug-ins and better performance.  Having said this, SX 3 is a fine piece of software on its own that will get the job done for the most part.  If you're looking for your first piece of recording software and are on a tight budget, but like the Cubase family, it might be worth it to get this version and save a bit of money if you don't necessarily need all of the new features that come with Cubase 4 and 5.

The software is pretty stable.

I've been using it for two years. I won't change in the near future...

I tested Cubase SL2 and Cubase VST 5 and I find the SX3 version is the best one.

A bit too expensive but it's worth it.

I'm pretty sure I'd buy it again.
Did you find this review helpful?yesno
»
Read the 29 user reviews on the Steinberg Cubase SX 3 »