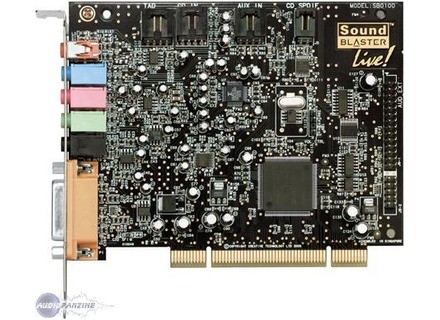 kQataµ's review (This content has been automatically translated from French)

Creative Labs Sound Blaster Live! 5.1
5
Live 5.1, it's good if you is not got a cent, and if you do own the music in your room of blaz student (the student, not the apartment) without trying too hard in eyeful. Between mic, line, and I / O twelve o'clock what more adept for a cheap and semi lo-fi ??
With 628 MB of RAM, 1GHz Duron, Win XP Pro works without TOO (see after) of problems, connecting a microphone and a good master keyboard while Cubase SX and a host of VSTi beginner and has what it takes to do good things already (for a little inspiration 25 euros the bar 128MB of good ideas Surcouf ...) !!!!
So in this crneau of use, I put him 9.

This is where hurts! Installation is galre: XP family is not worth it, Pro DJ will much better (I have no idea why) ... much better, but it's not the top, because if you install the drivers provided on CD franais, one of them enters "language conflict" (as it not mean they snog) with a DJ provided by Windows, which seems to have consequences on the functioning of Surround Mixer 5.1, d it not work (or is that Xp "dstabilise" choice). I think it is better to use that card in W98.
The Gnrale configuration is fairly simple, and fortunately so, the manual is very pusique trslger ... or no ... that's according to each ...

Drivers stable ... for now. The updates ??? I have certainly not well cherch but it has only climbed all relative because our friends are the www.kxproject.com to provide drivers that guarantee a latency of about 10 ms (Cubase SX anyway) and it shoots in relatively uses.
Perfect management soundfont, blender handy (you can make very goutus juice), or bundled numriques effects (but not for the record ... shame !!!) ... as good.
5.1 Digital model: the sound is actually very good, this card is more than enough for home-Pc-cinema installations.

I've had two weeks and goes really well thank you (considrez I'm not a home studio, just a student makes noise with his PC

. Good quality / price ratio, especially the view of the simplicity of use and ease of installation (under W98).
Ideal for a beginner or a solo musician who wants to put his ideas without much complicate life and empty the wallet, and with quality altogether more qu'apprciable.
Did you find this review helpful?yesno
»

VE's review (This content has been automatically translated from French)

Creative Labs Sound Blaster Live! 5.1
4
I was looking for a versatile card, SoundBlaster preferences (requires reputable ...) and I found it!
For CHARACTERISTICS, you just note that the "sound" is really correct and that the number of input / output (I'm used to connect a CD player or the computer or my MD headphones or a microphone and there is no problem) allows any person who does not possdant normment money to be able to have some fun.

Unlike Previous notice (s srement is the fact that I have a PC with Win MILLENNIUM), I had no problem during installation of card. Once it is plugged into the motherboard and the driver CD and install the software is ready-you card is thunder.

The drivers do not have to worry notable (and yet with a PC running with Millennium ...).
The card comes with a lot of software (CD, editor-wave which is simple but effective-trs, virtual guitar, mixing DIFFERENT sound signals that the card can grate with its input / output ,...).
The only thing I can recommend for this card is not to overload of work: do not try to register a title from a line out and play a mp3 at the same time, j 'I tried ... and concerns have emerged on the recording (background noise due to the mp3 playback).
I RPET this card is truly versatile: whether you are in a play or Crant video with the "virtual instruments" available (I'm going a bit far by calling them and ...) everything works, the card is unperturbed and the sound is always good. One of the things I love about the 5.1, is the publisher and the amount on offer effects (reverb ,...).

I possde this card from two to three years. I never t trs far in his ability but I have always contributed what I expected of her.
For games, it's a rgal (try a small Quake 3 at night with his mount a little, you will make many times small fears by believing that one of the bots (characters = g rs by the computer) is just derrire you ...).
For the "Fast Fashion noise" is not bad at all. I never test squenceur or virtual instrument worthy of the name), but must even be able to dbrouiller.
Let me conclude by recalling once again that it is a versatile card. Do not look to go with this card trs later in a field but plutt go far enough in number that the card does not slowed down,!
If I had to buy a sound card, I Rasht the same (there are no surprises with this 5.1) if it is silent on sale yet.
Did you find this review helpful?yesno
»

Cimerian's review (This content has been automatically translated from French)

Compatible GM-GS (not gniale), the Japanese believe that sleeping with a reverb loop in the ears!

- We must explain everything to them ...

A SF2, translate Soud Font 2, SF2 is a font of his carractre!

- Translation "for children under 20 years" (can not know, Charles, you all right?) N'coutent long as the Muzac Journe ...

Or even better FM sounds that kill.

- And thanks to the amount of RAM gets in your little pet.
- And yes if you have 512MB of RAM, you'll get 256 MB of samples of all kinds, including Britons dmnageurs happy ...

You know many hard-sampler which has the same price? ...

And audio in a while?

And a battery of four simultaneous DSP in real time, input and output:

What we want to do?

There are 3 catgories users.

2) The Player Acharn why not!

3) The curious who want to return to the big leagues, to make "Zique"

- Hear from the first step towards
Mrs. Music.

Then know that the said card in question offers for less than 350 of our ancient Franks, (and yes I can not get used to it, do not you?)

Come on, 5 years, I've even spare! adpanne well in a small Pc!

- Oh I forgot, even with the best in the world Matos, the most beautiful women can only give it a.

Explanation:
A bit of "imagination":

We still neglect the 'captives' of 'loft', poor chris ...

captive, ive adj. and n. 1. Deprived of liberty in prison locked. A captive bird. . Subst. Or HIST litt. A captive, a captive: a person deprived of his liberty and spcial. Made prisonnire during war and dune Reduces slavery.
3. Lit. Subject.
Hachette Livre, 1998

- Ah pnurie this habitat in beautiful areas, the DLOG leading companies, to the social! which will end up in the ghetto "rappiste" stop pull over on the piano!

- I want to be your slave ooooh my CRT and VNR ador!
- I want to be a prisoner of your cell dore! I wanted to be an artist!
- Or when the stars 'Accademia'

- Yeah the nude that you're okay!
But the composition and talent, I doubt it ...

- Check out my opinion on the Terratec EWS 88 MT
NB: I insist, I no royalties on the product.

Your comments are welcome!

Crashconverter's review (This content has been automatically translated from French)

Creative Labs Sound Blaster Live! 5.1
5
Ok the sb live! 5.1 a rotten numriques converters in between but the output is more than just drinking ...
It is an computer music slution 23 euros with a mono amplifier from other inputs and 2 Stereo Auxiliary ...
Cratives drivers? Trs means ....
With the famous Kx drivers? Carment we play in the big leagues with a latency that falls a 5ms (limit = 2.66ms) and only with kxASIO become Fully configurable DSP, the j'enten that can add any route effects to inputs (you can also load new effects to reprogram ect ...).
We can use the router for 5 Mono spare live ds software computer music ...
You can play live with VST over the five entries at a time without problems ...
So for the live play is teuf IDAL and do not plant within 3 years of use 0 to crash with the sound card drivers Kx (which also work with the Audigy, which is too expensive go to my t seen these converters almost as pourrave than the 5.1)

APRS to Save and import into the bank's? Make a quality recording studio?
Ben I buy a Yamaha UW10 (catre external usb 2 between a mono output Stereo unamplified) is less than 100 euros, because the Yamaha converters are reliable and good quality trs , is a trademark of Yamaha musical instrument, it has been for decades and they build instruments synthtiseurs numriques ...

jugs you'll even the quality of my productions and sound recordings!
http://www.crashconverter.com
http://www.superkenel.com

Otherwise I made the Mao years since I was 17, I started with Windows 3.11 on wincake 486 dx2 there 10 years ago ... I laugh and good of all those badgers who buy cards to 1000 euros to be able to enter the parade and who when asked to listen their music productions! My project is very technical and I build a small rack with 5 of Monos my sb live!
And may be to invest in the latest drive to WAV/MP3 Recorder Edirol ...

Put the trash creatives drivers, uninstalled the IMMEDIATE because it do not make the card at all level of full capacity and prfrs KX drivers free ...
http://kxproject.lugosoft.com

3 years
it costs only 20 euros ... and 30 or has the era I achetbr /> nan other cards are too Chres has got my ... Discoveries and when I KX drivers and comptences tural Features and the cards, no hsitation
unbeatable
yes no equivalent for the price ...
Did you find this review helpful?yesno
»
Read the 5 user reviews on the Creative Labs Sound Blaster Live! 5.1 »