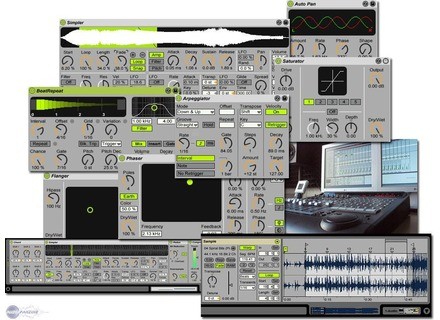 Live 5, General Sequencer from Ableton in the Live 5 series.

Ableton Live 5
4
Ableton Live 5 is a software that was given to me to try and I ended up buying it because I loved how easy it was too operate. This was many years back though. Also Ableton provides great customer service and tutorials on how to use Live 5 if you need it. This is a very powerful program and I think a lot of people just don’t know how good it really is. If you are coming from another midi sequencing program this one will look way out of wack to you. It really has its own look (interface) and it will probably confuse you. I had a tough time trying to use plug ins with it, I just couldn’t figure it out at first so I pulled out the manual and figured it out after about 15 minutes of searching and reading.

It performs great and didn’t crash or get buggy. It will provide a good sound quality but.. No matter what program you use you will probably have to purchase some external stuff like plug ins or other hardware for patches and sounds. Most built in stuff that comes with programs now are really cheesy or have been used a ton of times so you know exactly what sound it is if you hear it in someone else’s songs.

I wouldn’t use this software today because I am so stuck on other programs that I have been using so this one just sits on my laptop and doesn’t get touched. Maybe one day I will open it up and just mess around with it. But I don’t plan on using it any time soon. Maybe the interface is the buzz kill, and that’s the reason im not fond of the software. I like easy and simple interfaces that can be understood quickly, with Live 5 it just doesn’t have an easy interface.

SOUND QUALITY IS THE SAME AS IN ANY OTHER SOFTWARE. IT DEPENDS HOW ENGINEER YOUR MUSIC.DIDNT FIND ANY WEAK POINTS.

MY LOVE FACTOR FOR(ABLETON LIVE 5) IT IS A 2.......I USE SONAR 4 WITH EVERY PLUG IN KNOWN TO MAN BUT ONLY USE ABOUT 4 OF EM'HAS ABOUT THE SAME QUALITIES AND QUALITY AS ITS RIVALS BUT THE WORK SCREENS ARE A BIT TOO GARAGEBAND'ISH! ABLETON CREATORS NEED TO IMPROVE ON GRAPHICS AND SUCH......

Originally posted on FutureProducers.com
Posted by: BIGDtheeAbmnble (January 1-, 2005)
Did you find this review helpful?yesno
»

Ableton Live 5
5
This program has already transformed my work. Tape is really brilliant for rehearsed bands, but Live is the way to go for composing. I have a Nord Lead 2 but still ended up buying Operator - great sounds, especially with the new midi effects like Arpegiator. Simpler has cool sounds, as does Impulse, plus the effects are a blast to work with. I can't say anything is really missing when I now have so much to work with. Also, I did own an MPC1000 for a brief time, and it was like doing your taxes with a calculator watch compared to working with samples in Live. Warping is absolutley awesome, as is the whole clip editor.

The reason I bought Live was many reviews lauded the interface as user friendly and intuitive and the program itself easy to learn. I was not dissapointed and kudos to Abelton for a very well composed user manual. Also: brilliant idea by Ableton was to allow download of the full version for demo (just can't save anything). Second was the fact that it works on Macs and PC's. So, I learned the program on my PC on lunch at work, then, when the decision was made to buy, I could immediately start working. Brilliant. Also, my brother in law jazz drummer can get Live for his PC and we can work seamlessly through mail with .als file extensions. Brilliant squared.

I am fresh off the boat from analog, and the proverbial fog has lifted. I was working with a Tascam 488 8 track tape studio, mostly through headphones. I also colaborated with a guy who has a 24 track 2&quot; studio, which was great but very time consuming and hard to manage. For instance, reversing tape direction for efects like pre-verb is cool, maybe we felt like the Beatles or something, but time consuming and may be unusable. It's funny, Trent Reznor talks about all the hassle he went through to do what Live does in a half minute - it's somewhat sad but he's glad he went through the experience. I think the sound quality will be better simply because I won't be &quot;experiencing&quot; every single cable that needs pluged in to add some delay to this track, or a bass line that has to be played for all five minutes instead of being able to loop it and focus on the song itself.

It seems very well built - the navigating section is very intuitive, the layout of tracks and sections for adding effects, the slip view and clip editing, all very intuitive. I actually did have a problem with instalation, where I had to download the entire program on a dial up connection. The version that shipped on the disk did not contain a fix for OSX Tiger. I was grumpy about that, but quickly forgave them for their lightening fast response and subsequent opening of the program and the obvious myriad solutions for my prior recording woes.

I read a lot about other programs, but have no experience with any other DAW or software package for recording. Going digital was based solely on playing instruments rather than playing with equipment, and harness some of the fantastic technology to improve my finsihed product. AND not cost a ridiculous price. My situation is obviously what cumputer based packages like Live are marketed towards, so,in hindsight, if I had picked Cubase or Sonar I might be just as enamored with their programs. Live just appealed to me in that it was created by musicians and was described as revolutionary - good vibe for a complete studio overhaul.

Originally posted on FutureProducers.com
Posted by: Hybrid (January 2-, 2005)
Did you find this review helpful?yesno
»

Ableton Live 5
5
Excellent features, clip warping, sample editing, built in vst's and vsti's respectable. Everything that protoolslogic has just alot more musical. (quickneasy) Rewire is the bomb this program uses very little cpu so you can rewire multiple programs with no problems generally. Grouping tracks function would be good, maybe quicktime options for film would be sweet!

excellent tutorials, great layout. I really like the simple no glitter gui, in my opinion the best interface out there!

Its got its own sound which I like, but its so subtle that it may be my imagination...

once i had a problem with an asio driver but theyve fixed it.

Im running pro tools but i always seem to boot up ableton, for arranging and pre mixing its the bomb all the automation you could want the list goes on. I would generally master in protools but thats just for the realtime bounce options, and proven algorithims. If your writing music especially hip hop and electronic or playing live this is up there, make sure you get your hands on some good plugins...

Originally posted on FutureProducers.com
Posted by: Rajasik ( 2-, 2006)
Did you find this review helpful?yesno
»
Read the 20 user reviews on the Ableton Live 5 »

View all 4 videos of Ableton Live 5 »