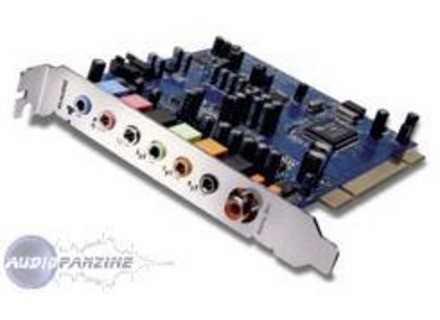 Jerdl's review (This content has been automatically translated from French)

M-Audio Revolution 5.1
4
The THD manufacturer, the ability to pass the 5.1 digital (via coax) and the different opinions on this card has very promptly motivated the choice, the ability to sample at 192 kHz in 24 bits.

I use my PC as the main audio.

I plug also RS25 Line In a microphone that captures my amp when recording guitars.

The drivers are relatively stable, although one is buggy when passedu Digital to analog mode.

I use Audacity mainly, and Guitar Rig. The card has ASIO 2.0, but it does go out on L / R analog, and even uses the coaxial ...

The drivers are up to date for Windows 7 and even 64-bit it works.

For latency no problem: with manufacturer data and testing on different sites that ranked the map as one of the best in performance when it was released, configured as 64ms of latency and 96Khz, Guitar Rig recorded a total latency of less than 2ms. In other words, almost nothing., Knowing that we can increase up to 192kHz (my amp sound wanted more after 96khz: o)

The map is relatively large for a sound card, it is possible that on some motherboard, such as P5BE +, one or more capacitors on both their sizes can block the card. On the due P5be + I use the wire cutters on one edge of the map ... but no problem to operate.

It has to be easier for the general configuration, the audio channels between digital / analog and MIDI parameters that are not present.

At first, there were inconsistencies with 64bit systems, now it is no longer the case, the drivers are current.

This is the first semi-pro card that I use, the rest are just playing cards.

The Pros: Hard pure Clearly the specificity, the 192 kHz, the low THD.

The Cons: The need for an amp for decoding DTS / Dolby Home Theater, ASIO 2.0, which does not copy the save options.