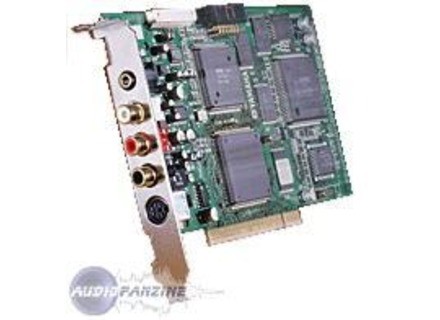 jamychanprod's review (This content has been automatically translated from French)

Yamaha SW1000XG
4
This card is a yamaha sound module (+ 1000sons) + sound card, and the price is pretty good for its time.
Very useful for people who are already well equipped with expanders and lack of MIDI! Is a more doublette noon for the PC!

Installation is very simple (no recording Intrenet!) Just has a serial type.

Unfortunately incompatible with the Creamware card PowerSampler! and it is a shame.

The configuration of the card this very simply, and to use it as an expander with EXTREN except that you control all the settings from your sequencer! (Or XG works!)

The drivers did very promptly never posed of problem.

Latency correct for the epoch

I kept 4 years and if it was compatible with WindowsXP I would keep!

Yamaha SW1000XG
5
In any way I wanted to find the pci quality of my plugger DB50XG that silent on an ISA card.
The SW1000XG and made me feel like I found secondhand trs not expensive (all dates 7 / 8 years).
Dception the era, the card does not bank on the user as DB50XG which allowed to accumulate four partial to a (large) sound a little later I could glimpse that overcome this limitation through apps.

I do not remember having had particular concerns with this card, note that there are always two sound cards that have coexisted in my Systm (PC-Windows).

In fact if I rdige notice is to correct the view Previous: The card runs without problem under XP (may be that the drivers n'taient not left the era).
I do not know what it is for against vista.

ASIO4ALL drivers work well with trs and Whereas lower latency.

TRS is a good expander.
Although the sounds are a bit small right now and the apps could relguer shelved.
on the other hand to cost a midi file it better to have the hardware and in this context it makes them sound good trs.
Sometimes I also record some of his sound or combination of sounds because of the number there who are still drinking.
It also has the particularity that I do not malheureusementn can accommodate an expansion card of the PLG SERIES and there is trs good (I think of the piano and the card VL).

I do not know if I Rasht but I do not want any leave my PC.
I liked his factory ct gas pretty hard use, a certain era it relieved a lot CPU, notte regarding the effects.
This is not really the problmatique NEWS.

Yamaha SW1000XG
5
The "everything" XG reduced in size without the disadvantage of the bulk of a keyboard.

I currently use and always with Win XP, since (I think) not to use it with a recent system such as Vista and Seven.

Regarding the instruments, well it's pure quality XG MIDI accompanied by several other banks including GM (TG300B).

Uh! I hear that XG Midi, this date still 90, which means that the sound quality is not exceptional, but the reworking panels via MIDI effects completely compatible with older versions of Cubase ( j'usqu'à SX3 course), it will delight some level.

A small publisher is also provided with the drivers (XG Works), but I did not install XP.
It can also be downloaded directly on the site of yamaha (free or not, I sai more).

We can also add to this map (via suitable connectors) two additional cards (not both at the same time eh, one at a time) that will lead, or extra sounds or is a harmonizer / vocoder (the robotic vocoder) 90 What! by the cons armoniseur done very good job.

Finally, the card itself has a stereo line input with a huge blast like the wind on the roof of the world, a stereo line out L / R (RCA / RCA), a type of digital output SPDIF input / Midi output (connects using a cable special "to host" or 5-pin mini din if I'm wrong), a connector (on the card directly) for plug-in board PLG100 (additional sounds) or PLG100 -VH (Vocal Harmony) and another connector for a direct relationship also with the DS2416 (also from the same manufacturer) which relates the six audio outputs to the inputs of the DS2416 internally via a special cable as well.

XP drivers penny ¨ ne not move a hair.
More updates since the map is outdated fall by its manufacturer as the DS2416, but it does not matter, in XP it works fine.

Use with XG Works (acquired for a handful of dollars on the European site of the same name as the map), but also directly into Cubase (anyway, it is designed to normally).

Latency is pretty énnorme I think; the order of 18ms, therefore, impossible to play on live with (lol).

I've never used audio except perhaps to dub tracks via the DS2416 or directly into the EMU 1820M via the SPDIF output numérque
Otherwise in the South, like any self-respecting keyboard is 16 MIDI tracks simultaneously.

2 seconds for drivers; not even need to reboot the PC and presto! may have to play right away.

Incompatibility not known until now except as I said earlier, impossible to install on Vista / Seven.

Config-General of the simplest including Midi, one branch is opened Cubase and we play or have the program.

Actually read the manual for the uninitiated to the South and especially for an external connection with the DS2416.

I use it since I buy and never any problem with.

I did not try others before being the only model (PCI I mean good) in its class to offer as many possibilities of sound and other effects all compatible Cubase.

What I like most is the publisher XG Works that really allows the sound to work again without having to dive into menus tedious as offers other keyboards and samplers today.

What I like least is the breath at the entrance of the cul card that does not save much if in fact this is just the breath of a breeze winter d Moreover, in the modules might draw something immoral or even unknown

Value for money Excellent (well not a current or a sampler akai 2000, but it's worth its weight in gold.

I've redone this choice because I have two cards, two additional PLG100-VH and PLG100.