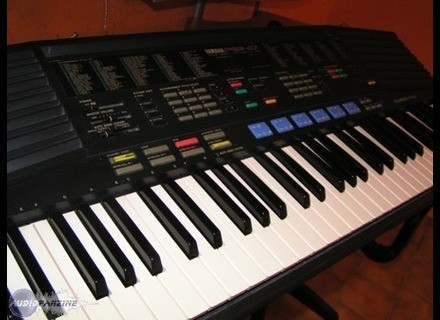 PSR-47, Keyboard Arranger from Yamaha in the PSR series.

All user reviews for the Yamaha PSR-47

Yamaha PSR-47
4
Yamaha has been making PSR Models for many years. This particular model (PSR 47) is old but when I play the newer models in the local music store they don't seem that much different in terms of sound or features. These things are everywhere and they can be gotten cheap. They are inexpensive light weight non-professional keyboards that feature the usual array of sounds and functions you typically find in these type keyboards. Here is a list of some of the features.

These keyboards are remarkably fun and useful. The main drawback is that the interface (at least on this particular model) can be very cumbersome and hard to read. It uses yellow words and numbers on top of a silver background and its very difficult to see unless you are in well lit surroundings. Accessing some functions via the multi function buttons and menus can be a real chore. However there is a useful dial for accessing items and there is a nice one touch button that allows the user to instantly return to the basic piano sound from anywhere. However the keyboard actually does a lot and I guess you would have to be an engineer to figure out how to access all this stuff in a small space.

The sound output by this keyboard is not of professional quality and there is some low level background noise. However the sounds are remarkably good especially the piano sound for such a cheap keyboard. Personally I have had a lot of fun with mine and I like the fact the you can move it around easily or stand it up on its end and store it in the corner. I play mine for fun and to write melodies with. Some of the rhythms are very fun and useful too. So if you are looking for a nice home keyboard to have fun on this will suit your needs.

Yamaha PSR-47
- 61-key yamaha synth.
- 1 headphone output. MIDI In, Out and Thru.
- Sounds: 256.
Rythms: 256, if I recall correctly.
No sound can be edited. Only rhythms can be edited with the built-in sequencer.
- The PSR-47 includes effects but they are very basic, both in terms of quality and quantity (it's from the '80s).
- The sequencer allows you to record (but very little and everything gets erased when you turn off the synth), to edit a drum machine (4 bars) thanks to the big buttons that represent each a different sound (although the engine is not very precise), and to add an "orchestra" (bass, guitar, etc...) to whatever you're playing.

- The general setup is simple, the PSR-47 doesn't have many functions: The sounds, the rhythms, the sequencer, some effects (which is better not to use or you risk having a 1-note polyphony), and the demo (which is a superb jazz/rock fusion track, I would love to know who wrote it :P ).
- I never had the manual, since I bought it secondhand, but there's no real need for it. You only need a couple of hours to know how the PSR-47 works.

- I used this keyboard 4 years during college.
- What I like best is its look, full of buttons and with the screen, its 61-key keyboard (which was totally new for me at the time), all its sounds (some more than others, like the pads and strings), and all its rhythms! In short, this synth is truly magical!
I currently do not use this keyboard, but I still keep it for sentimental reasons: It's the first 61-key keyboard I got as a present when I turned 12 and I had a lot of fun playing Jarre and Vangelis with it. It allowed me to progress because I was able to explore new things but, most of all, it was my playground after long days in college.
With hindsight, I think its keyboard is really bad, it's so soft that I can't understand how the composer was able to play such a virtuoso and complex demo with it. It has some nice "Forever Young"-like and '70s disco pads, some acoustic sounds that weren't that bad back then, strings that aren't very realistic, yet still have a particular synthetic sound that I love. Furthermore, it still looks nice and it's odd to compare it to the modern PSRs: There's some family resemblance.
- Before this keyboard, I had a Bontempi with 30 mini-keys with which I wrote my very first compositions as a kid, In other words, this keyboard revolutionized my playing, thanks to the number and size of the keys.
- I never really knew how much it cost new, its price secondhand was around $90, which was OK back then (mid '90s). But today it isn't worth it, even if it's only $90, unless you are nostalgic.

I give it 8/8 considering that it's a keyboard that I value a lot for what it means to me.
Did you find this review helpful?yesno
Cookies help us improve performance, enhance user experience and deliver our services. By using our services, you agree to our use of cookies. Find out more.