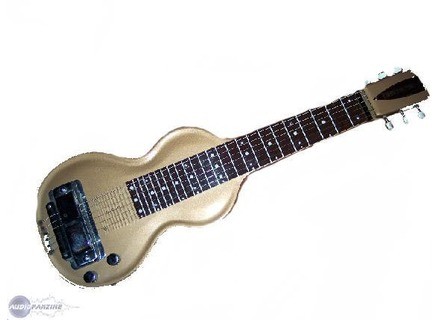 Rickenbacker Lapsteel
5
This is a really old, but really great, lap steel guitar. It has a lot of similar qualities to their electric guitar Rickenbacker counterparts. It is a US company. The controls on it include a volume knob and tone knob. This is one horseshoe magnet pickup, which is really old-school. There are 23 visible frets, but if you're good, you can go almost as high as you want with the slide (at least as far as the pickup).

This is sort of irrelevant on this guitar, as it's a lap steel, but there are 23 visible frets and it's easier to go at least 4 notes higher than that if you have great intonation and intuition. Getting a good sound out of this is great, just make sure you have amps that are senstive to it's needs. It is great for playing a lot of different styles, I've seen blues players use these and really wail, I've seen country players get smooth, great tones out of it. I've also seen guys really rock out with some awesome solo performances.

With even a light overdrive, you can get a tone pretty close to David Lindley's on Jackson Browne's album Running on Empty. If you aren't familiar, that is a pretty incredible sound. Granted, you won't sound exactly like David but you get the idea. There's a ton of great sounds to be had here, the pickup is so hot that you won't really want for much. Even clean you can bring the house down. With a lot of restraint and lowering of volume you can get great country tones, and with the right reverb Hawaiian tones are easy. I haven't found anything I don't like the sound of with this guitar.

I love this lap steel, probably the best one I've ever played. I think most people would agree. It's going to run you a lot for a vintage one, but there are decent newer ones that aren't too hard to find. They aren't exactly the same but they still sound great. Highly recommended.
Did you find this review helpful?yesno
»

floblues's review (This content has been automatically translated from French)

Rickenbacker Lapsteel
5
The model I have is a silver Electro Hawaiaan (chromed brass), 1939
Made in US course ...
36 frets (which are just benchmarks).
The beast is equipped with the famous Horseshoe micro Rickenbacker was one of the first micro-power series, and believe me that sounds (especially pre-war models) ...
1 volume 1 tone ...

When you play the lap steel not worry too much of ergonomics ...
It is not too heavy although it is brass.
Already without the plug is a bomb: a lot of sustain (the body is hollow ...) a clear sound amazing, metallic necessarily enough ...

But when the branch is even better (in a Peavey Classic 30), clear sound is beautiful and powerful, it moves into crunch, distortion and focus the sounds of chainsaws and Feedback controlled ... you can go from the small quiet big blues rock drool ...
It adapts to all ... in short I love it!
For use on a tube amp of course ...

I have 2 years (bought on Ebay to United States for only 600 euros!)
I love it is beautiful and magical (almost 70 years!)
I have a Gibson in the same period and it has nothing to do ...

If I find one at this price I bought it right away ...

See all 12 photos of Rickenbacker Lapsteel »