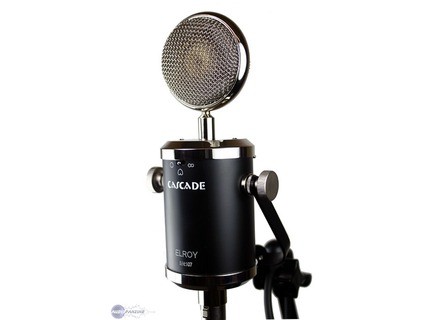 All user reviews for the Cascade Microphones Elroy

Cascade Microphones Elroy
4
Cascade Microphones' Elroy is a large diaphragm, uniquely designed tube condenser microphone. It has a the capsule and covering above the rest of the microphone, making for a futuristic looking mic. Elroy has a few different pick up patterns to choose from, including cardioid, omni, and figure eight. It has a single 6J1 tube inside of it, and comes with a power supply and special 7 pin cable since it is a tube mic. Additional features include a -10 db pad and a low cut filter. If you buy the mic new, it also comes with a shock mount and a study carrying case.

Cascade Microphones Elroy is a tube microphone aimed at those with not too much to spend, meaning us home studio owners. While it has a pretty thick sound, and will get the job done more times than not, I don't think I'd recommend this to a professional as the sound quality isn't up to par, so just keep this in mind going forward. Having said this, Elroy is a great microphone for a mic in this price range. You're getting a fully functional tube mic, with all of the features you would expect from a tube mic. It is suitable for recording a wide array of voices and instruments, but thus far I've only got experience using the mic to record male vocals, which seems as good of a place as any to start with. The recorded sound I heard from the monitors, was a full bodied vocal sound, covering the low end of the male voice quite well. Of course there are all different types of male singers, but this was for a more laid back style of singing, meaning not too heavy or loud. However, I do believe that in a home studio environment, Elroy would do a pretty good job of picking up any voice. If you're in the market for a budget tube mic, definitely include this on the list of models to check out.
Did you find this review helpful?yesno
Cookies help us improve performance, enhance user experience and deliver our services. By using our services, you agree to our use of cookies. Find out more.