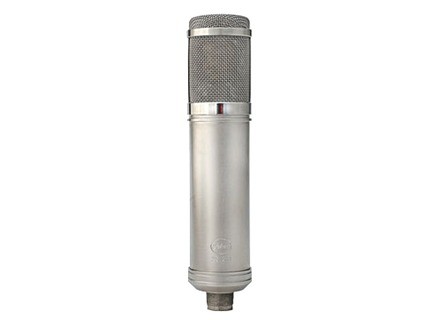 Peluso 22 251
4
The Peluso 22 251 is a tube condenser microphone best suited for use in the recording studio. In fact, I wouldn't recommend using this for live shows as it is not only expensive, but somewhat fragile and not intended for use on the stage. It comes with a separate power supply as the tube inside needs to be powered by an external source. This is another reason that you should keep this microphone in your studio even though its not too bulky.

I've been using the Peluso 22 251 tube condenser microphone for about a year or so and I have found it quite useful in a number of different applications. The overall tone quality is fat and rich in tone, which makes it an awesome vocal microphone for all types of singers. I have also used it with great success on the body of acoustic guitars and other stringed acoustic instruments. This being said, the Peluso 22 251 is a great all around microphone and will probably work great in any situation. While I wouldn't say that this microphone will color your signal, it does have a unique tone quality to it and will add fatness to your signal, most likely because of the tube. Besides the tone quality, the overall look of this microphone is just about as cool looking as they get. It is big, which makes it hard to place for certain applications, but it makes for a great aesthetic and is always a great choice for taking pictures with! The price of the Peluso 22 251 isn't exactly cheap, but considering it is a high end quality tube microphone it is probably worth the price if you are looking into getting a microphone like this. While it isn't the best microphone I've ever heard, it sounds pretty great and is a great vocal microphone.

Peluso 22 251
4
The Peluso 22 251 is a variable-pattern tube condenser microphone best utilized in the controlled environment of the recording studio. Its name alludes to the classic Telefunken ELA M 251 by which it was inspired. It comes in a complete kit that includes a padded wooden box, 7-pin tube mic audio cable, screw-in type spider shockmount, power supply unit with IEC-type detachable power cord, and a medium-quality carrying case which conveniently houses all of the above.

The power supply unit is basic and sturdy, with a strong metal case, a quality toggle power switch, and a stepped variable pattern rotary switch that works with great feeling, solid "clunks" at each step as you turn it.

There are 9 polar pattern positions to choose from, varying from omnidirectional to cardioid to figure-8, with three steps "in between" each pattern. This makes the mic very flexible both tonally and for positioning and is one of my favorite features.

The mic itself consists of a gold diaphragm, 6072 tube and custom output transformer housed in a basic, sturdy and familiar looking but unusually tall and slender gray metal housing with a strong metal grill that helps reduce plosives.

There seems to be a market perception of tube mics typically sounding "warm, smooth and fat," but the 22 251 proves that this needn't always be the case! This is a very bright sounding tube mic. Often, especially with low to mid-priced mics, "bright" can translate to "thin" or "strident," but I am pleased that this is not particularly the case with the 22 251. I would call it "bright done right," as although there is an emphasis on the top end response of this mic, it is a pleasant, tight and grippy (rather than strident and obnoxious) top, with a very crisp sheen for color--very well suited for dense mixes, particularly male and female rock vocals, drum overhead and acoustic guitar. The lows are tight and fairly clean, not "big" and certainly no hint of bloating. The low end does of course change some depending on the selected pattern due to increasing proximity effect (increase of bass) as the pattern becomes more directional. The midrange continues the grip of the top end, is slightly scooped and clear. I have rarely found any need to cut mids and lows out of vocal tracks done with this mic, though it does take both additive and subtractive EQ well. Despite its exaggerated high frequency response which with other mics would make me very cautious with such a recorder, this mic can be great to digital platforms such as ProTools and isn't very choosy about preamps. Its crisp sheen on top and good, clean manners in the midbass also make it a fantastic mic to hit analog tape with. Great care should be taken when placing this mic for a vocalist prone to sibilance. Although this is has been a workhorse microphone in my studio, I would stop short of calling it general purpose due to its brightly colored character particularly in the upper and upper-mid frequency range. I generally find it either will or will not work well for a given source.

As for quality...I own four Peluso mics, and my experience with Peluso's tech service has been hit or miss. In the case of the 22 251, the only problem I have had is that the 7-pin audio cable failed (as did the one for my other Peluso tube mic). I attempted several times to contact Peluso about the problem but never heard back. In the end, I resolved the problem by buying expensive (but nice) Mogami 7-pin cable, and was disappointed with the experience. The wooden case has a fairly flimsy clasp which broke after a few years, though it lives in the larger carrying case, this wasn't a big deal. The mic itself has been reliable, as has the power supply unit.

This said, it must be considered that Peluso is a small mic maker and does not have the staff or resources of much bigger corporations. One must also consider that mics in the popular-but-tricky $1,000-$1,500 price bracket do need to make concessions in price vs. quality ratio; this can be seen in the flimsy hardware found on the carrying and wood cases and the 7-pin audio cables provided. Where your money really seems to go on this mic is its electronic components and sound quality and, let's be honest, that's what counts the most!

In all, this mic stands out to its competition by offering a different flavor of voice--particularly for a tube mic--and a generally high quality of sound that indeed makes it worth the price. Despite certain niggles mentioned, I would still have this at the top of my shortlist for a bright sounding but well behaved, mid-priced and well-featured microphone.