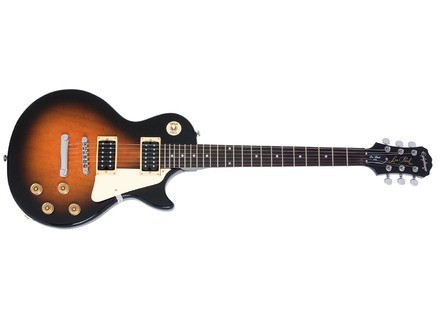 Epiphone Les Paul 100
3
The Epiphone Les Paul i bought from Guitar Guitar back in 2011 was made in Epiphone land - also known as China. It has the classic Les Paul setup with 2 volume and 2 tone pots (one for each channel) along with a 3 way pickup selector switch for the Neck, Middle and Bridge positions. It comes with an ebony wood neck, 2 humbucker pickups and 22 frets.

Admittedly, the top frets can be a pain to reach, it is easier sitting down but when standing with a guitar strap that has strap locks on it it can be quite awkward so lead guitarists with small hands might be in trouble when it comes to this but then if you want to be like Slash or Jimmy Page and be a Les Paul guitar player then that is the price you will need to pay. With an Epiphone Les Paul, you are not going to get the exact same quality of tone as a Gibson, there is a reason that the price gap is so large, so anyone who tells you that you can is either - A. In denial - B. Inexperienced or C. Hasn't played both guitars. With that being said don't let it put you off, whether you are a new beginner guitarist looking for their first axe, or a more experienced player wanting to try out the Les Paul style of guitar without having to remortgage the house, then this Epiphone could be the ideal choice for you.

Traditionally, the combination of a Les Paul guitar and a Marshall Amplifier has always been a successful combination, and today that still rings true, you simply can't argue with that setup. If you are a rock guitar player then i would recommend a Marshall amplifier. I personally use a Marshall AVT150 half stack with the Epiphone Les Paul on the OD1 channel. When distorted this guitar can sound decent, the bridge pickup has a little bit of bite to it but can also sound quite muddy, especially on a clean setting. The neck pickup is warm but undefined with no real character to the sound and can get lost in the mix in a loud setting, depending on what amp you are using it is definitely suggested that you dial in a lot of treble and presence if possible to give more life to the pickups.

The pickups that come standard are the main problem with the Epiphone Les Paul as they are usually low quality and can sound 'muddy' and 'boxy' which isn't really what a great guitar should sound like especially in rock. I would seriously recommend upgrading the pickups to something like a set of good seymour duncan pickups almost straight away if you can, it will improve the sound immensely straight away and also produce more output volume which is another noticeable difference between Gibson and Epiphone Les Pauls. Another way to get round the lack of upper midrange response from the pickups is by getting a good EQ pedal such as the Boss GE-7, and boosting between 2-4khz until you notice the sound becoming clearer but not too much or else it will wander into piercing and irritating territory, also try taking some of the lower midrange out between 300-800hz as muddiness can be taken away from this area on the Les Paul and often sounds more natural than a lot of boosting. Some distortion pedals can also improve the sound better through some of their features such as the Boss DS-1 or the Metal Zone if you are looking for a more extreme/heavier and processed sound.

The best thing about this guitar are the looks and the price. As mentioned earlier, it is perfect for beginner guitar players and will suit their needs perfectly, most of my review is from an experienced guitar players point of view having used a Gibson guitar for years before purchasing the Epiphone Les Paul so don't be put off by it.

The default factory sound quality is average, although if you do have some more money to put towards it, i would recommend purchasing better pickups such as Seymour Duncans or even Gibson pickups, and also get a good pro setup done to the guitar as often the intonation on Epiphone's can be a little bit wayward which is bad especially for playing parts around the 12th fret or higher as it can sound out of tune and downright nasty.

All in all, this is the best priced and best quality for the price (in my experience) copy of a Gibson Les Paul on the market today that i am aware of, plus it looks the part as well. So whether you are dressing up as Slash for Halloween or just want the Les Paul experience, you can't go wrong with the Epiphone.

Epiphone Les Paul 100
3
This Epiphone LP was made in Japan. It has a bridge and neck pick-up. These picks can be selected using the Rhythm/Treble Selector. Individual volume controls can be used to control volume of the pick-ups separately. The same is true for the Tone knobs that apply a variable low-pass filter.
The guitar uses a standard 1/4" output jack. A standard LP bridge is used such that the strings can be easily changed without having to feed them through the body of the guitar.

This guitar is pretty heavy. It is the first thing you notice when you pick it up if you are used to Strats or Teles. It can take a little bit of getting used to if you haven't played LPs very much. However, this Epiphone LP isn't even as heavy as some of the Gibson LPs that have solid wood bodies. This Epiphone LP has some composite wood which makes it a little bit lighter.
The neck is very smooth and comfortable to play. It is not to thick, but not to thin.
I have had this guitar for ~15 years. The hardware is kind of cheap, and is probably a good idea to replace. I never got around to replacing it, just because this guitar was never my main guitar. I would also recommend replacing the pickups. It is not that the pickups sound bad, but you can purchase the pickups used in the top-of-the-line LPs and put them in an Epiphone for pretty cheap. It is a good way to upgrade the sound of the guitar for a small amount of money.

This guitar is made for rock music. Put it in the treble (bridge) pick-up position and turn up the gain on your amp. The guitar has plenty of signal output to produce some very musical overdrive harmonics. Trying to do the same thing with single-coil pickups will just leave you unsatisfied.
The rhythm (bridge) pick up setting is also good for bluesy chords and lead. It cleans up nicely if you back off the volume knob, but can produce some very usable smooth sustainable lead parts.

This guitar is a satisfactory intermediate level guitar for anyone who has been playing the guitar for longer than a year and is ready to step up from the entry level $100 range. It doesn't compare with Gibson Les Paul models in either sound quality, woods/hardware, construction quality, etc. But is also doesn't compare in price, luckily. It sounds like a Les Paul. If you a guitarist that likes rock music, and like a lot of bands that play Les Pauls, then you will be happier buying this Epiphone LP than buying a comparable Fender Strat. It might not be the perfect, ideal guitar, but it is worth saving your money until you can really appreciate/justify a $4000 guitar.

Epiphone Les Paul 100
5
I've been in many bands (local) ,i do also record with some Singers,and i make my own music too..i play mostly everything : rock,hard rock,blues,alternative,Pop, even new age and this Guitar fits my needs.

I live in Lebanon so i baught it from the Gibson Dealer in here For 400$ i had a fender strat before,but what i wanted is a Fat deep tone wich a strat don't deliver it,the first i entered the shop i gotta say that this guitar is an eye catching with it's finish,there was 2 LPs Epiphone Classic ( Black ) and the Lp-100 ( Heritage Sunburst) side by side..i tired both the Classic coast 900$ ..didn't have that much by that time so i tried the Lp-100 and it surprised me! the action is way better ..the fret baord is thiner..and easy to play ,it's tone was great ..Crystal Clean on the clean channel..screaming solos with the distortion so i baught this one..the tone was deep warm with a good sustain..this is what i needed ..

First of all i do like the Finish (herritage sunburst ) it makes it look like a Classy LP ,and i like it's thin body..bout the way it sound, it fits my needs as i said , i like the warm deep tone caused by it's heavy wood , i also like the feel of it's weight, u feel like ur play a GUITAR!

there's nothin that i don't like in it..but i wish that it had a les paul signature on the head stock ..that's all.

It's well constructed..heavy guitar..once i droped it accidentaly from it's case right to the floor..it survived without a minor scratch! the tuners are little bit cheap..but that's nothing..and the pickups ain't perfect but they do the job..but everything else is quite good.

it's a great guitar with a greater sound,u may not beleive it..i played it head-to-head with a Gibson Studio.. the owner of the gibson liked this one..and so do i it's better than the gib. studio..
if ur lost and don't know which guitar u have to buy.. buy this one.
for me i replaced the pickups with :496R and a 500T gibson pickups..and replaced the tuners with grover turners...
and it's almost a gibson..it sound like a gibson..cheers.

Epiphone Les Paul 100
4
i bought this guitar because it sounded decent and i wanted an electric guitar i paid 350$ at a long and mcquade store.

good sound ,nice fretboard ,solid build(ive hit the headstock on ALOT of things and it duznt have a single scratch) ,good sized frets ,not very much fret buzz.

the strap knobs are too small ,it doesnt stay in tune very long ,the pickups are pretty muddy ,i wouldnt play this clean because of how muddy the pickups are id just have an amp with nice distortion and dont even think about using a clean setting ,its a pain in the ass to restring this ,its hard to hear hammer ons.

very nicely done ,even for a korean made guitar ,its solid you cant complain about the construction ,i have had a single problem.

great guitar ,you will need to upgrade when you get better i think ,ive had it for.....a month and its like brand new and im just as happy with it today as i was with it when i first got it.

This review was originally published on http://www.musicgearreview.com
Did you find this review helpful?yesno
»
Read the 35 user reviews on the Epiphone Les Paul 100 »