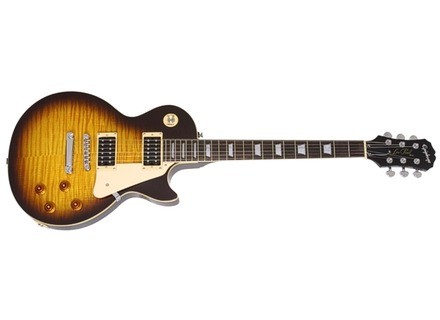 Les Paul Classic Plus, LP-Shaped Guitar from Epiphone in the Les Paul series.

Epiphone Les Paul Classic Plus
4
The Epiphone Classic Plus stands out from the crowd in that it has a very nice figured maple top and an awesome neck shape. The guitar has a mahogany body with a maple top, it has a mahogany set neck, a rosewood fretboard with 22 frets, a tune-o-matic bridge for tuning stability and tone, two humbuckers, two volumes, two tone knobs and a three way switch.

The neck shape is the main thing to look for. It has that 60s neck profile which is extremely comfortable to play. In fact, it's my absolute favorite Les Paul style neck shape that Epiphone and Gibson make. It's thinner than the normal 50s shape, but it's not so thin that it kills your hand like so many other ultra thin necks out there. The fretwork wasn't too bad on this, but there were some sharp edges that should have been gone over better. However, given the price, I guess you can't complain too much. On top of everything, it looked killer.

The sound wasn't too bad. In fact, I think this model sounded a bit clearer than the other guitars I played, and I think that's due to the pickups being uncovered. The bridge pickup had some decent bite for hard rock riffing, but the neck pickup was too bright for me. I like an ultra fat neck pickup, and this one had a bit too much treble. If I had it my way, I'd probably throw a JB in the bridge and a 59 in the neck. That's roughly the ultimate and most versatile pickup combo out there for the money. It can do nearly every genre, and it can do them well.

These guitars seem to be a bit harder to come by, but they're pretty cool guitars. I especially enjoy the neck on this thing as it's thinner than the standard Les Paul style shape. Things you should look out for are fretwork issues and nut issues. Those two things can really make or break a guitar. Search eBay for some great deals on this.
Did you find this review helpful?yesno
»

nicolasfaburel's review (This content has been automatically translated from French)

Epiphone Les Paul Classic Plus
5
This guitar has t made in Korea.

Bought new in 1992 is mahogany with a flamed maple top. It has no pickguard to hide microphones or chrome.

The handle has 22 frets jumbo, is mahogany with a rosewood key glue.

Has the usual 2 volume and 2 tone selector + 2 positions.

The handle is trs enjoyable, I enormment jou and varnish on the back of the neck eventually wear out. so I lgrement punctual. Bcp is softer and does not "stick" at all.

The frets have been replaced because too uses.

Ergonomics is not the strong point of this instrument because there is no chamfer as the Stratocaster ... The weight is consquent and need a back muscle to not flchir long drives at concerts! But it is more than lgre MODELS rcent which approximates the bcp gibsons ...

The sound is achieved very easy because there are few rglages. The tone knobs are pretty inefficient ... The volumes are not great either! Today they are dead, as it sizzles around for the jack!

Well, I like blues, hard rock variation on ... his personality is well said, and the guitarist is to adapt ... It fills me great for years.

The sound, microphones changs, but are kind of good quality trs. The configuration of micro orint I chose me to a musical style that suited me, so I do not hate sounds with this guitar.

I do not like is that electronics is not great. I think we must all change when changing micro ...

I use it for 13 years and I've carted around, beef LYCEN, repeated, concerts travel ...

It's brand but it sounds and comfort of the game is still. I think a good offer electronic services for ...

And it will allow me to rediscover the pleasure of playing of yesteryear.

At the time of purchase, I t just conditioned by the musicians of the era of fashion ... KNOW you are a Slash? I hsit with a Start, but I broke down on the table Honeyburst Flamm ...

Finally as a former beginners, beginners at all is finally a matter of appearance, but I did not regretted!

And then a few dozen months APRS I buy a Strato dmentielle! To be continued ...

In this era guitar cost 2800 francs ... my parents for Christmas.
Did you find this review helpful?yesno
»

See all 24 photos of Epiphone Les Paul Classic Plus »

Other names: lespaulclassicplus, lespaul classic plus