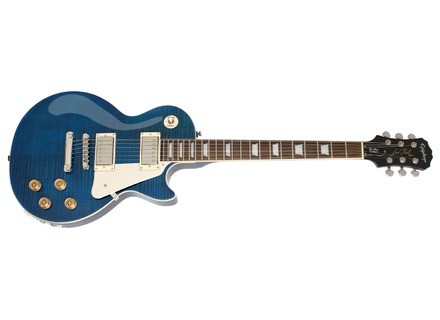 Once there, I compared the Ultra III (made in China) to my Gibson Les Paul Studio (made in U.S.). I was pleasantly surprised at the quality of the Epiphone which I find (almost) as good as my Studio.

The big downside I read everywhere: crimping some strings. At the end of the box, only my code E frieze serious when I scratch like a nag. Otherwise I find the strings low enough for my taste. So I have not had any problems with mine. I'll still see my luthier to fix everything.

The color in Vintage Sunburst is beautiful! This Epiphone is not ashamed to face a Gibson Studio! In addition, with its hollow chambers, the Epiphone is any slight. This will be a treat for my back during long concerts

We find here a Les Paul but you can transform using micro Piezo Nanomag included. I know pretty well Piezo pickups, I have a Godin Solidac and my Gibson has a Piezo system GraphTech. The problem I had with piezo is that the sound is very sharp and I think this is due to the fact that the sensors are located at the bridge. With no tone controls on these guitars, I had some sounds rotten when lives. With the Ultra III was 3 settings: gain, bass, treble that make it easier to carve its acoustics. 2 caveats though:

- 3 mini knobs on the back of the guitar seems very fragile and do not have an indicator (detent point). It is not practical to store a setting
- There are perhaps half a second to start the acoustic microphone. It is time to consider when you want to make a transition magnetic pickups -> piezo

The tuner may sound gadget for some other musicians (pro) have found it indispensable. Everyone will find useful, but I admit that it is convenient when you are in a place with a lot of noise and you want to have a perfect tuning.

I did not use the USB port, but I think people will find useful.

The quality / price ratio is unbeatable! I impressed many of my colleagues zicos with this little Epiphone Ultra III! Go for it!

Oli_34160's review (This content has been automatically translated from French)

A very good 8 because a violin, a chandlery and sonic possibilities of such a guitar of this price are unparalleled.

The handle is very nice despite my small hands. It says here that there would be one bp "stuffer". By correctly adjusting the curvature of the neck and height of the bridge, there is no disruption of this kind (at least not on mine). This is a Les Paul, while bcp lighter and better access to treble. I have not tried yet standing. But according to some forums, it would tend to "bite the neck." I will publish this comment as soon as I did a test. The sound with the microphone is what I expected and even more thanks to the integrated findings instrument (I&#39;ve never had Gibson Les Paul). It has a very good sustain despite a much lower weight to the Paul Gibson.

I play all styles and fits very well. Obviously it is "typical" Les Paul therefore plans Knopfler and others, it will be something else (I had LAG Rockline Toulouse equipped with Seymour). The outline sound is sculpted and frequencies produced stand fine. The balance between the two microphones is good (after adjustment). The sound produced by the Shadow is interesting. It is not an emulation (type Variax) but a piezo pick for the more acoustic sound possible. One can imagine that, starting from this premise, Epiphone has made an effort to make the guitar sound without being connected to an amp. Well, it&#39;s true. But nothing amazing, however. The introduction of this little "extra" can still get sound surprising but quite usable. Insofar as the volumes and Piezo Pro Buckers are different, you can inject a bit of volume to the middle position sensor micro magnetic, which allows to "simulate" a single coil.

I for 1 month. I had one in the past 76 Strato, a Gibson The Paul, many Ibanez, a Variax 700. I currently have a Lag (described above), a 1990 Aria Pro TA60 (imitation ES-335 type 59), a folk Aria also 1978. I play a Rivera Thirty Twelve and Lunchbox II ZTAmplifiers. This guitar is complementary with the rest of my "flock". I bought this guitar because I refuse to pay € 2,500 for the purchase of a Gibson which essentially consists of the price by the cost of marketing and sponsorship.

One of the features I like most is the USB connection. If you want to record your guitar, no need to buy an external sound card. You plug your guitar into your PC (or other) after you have downloaded and installed the driver Asio4All. You can adjust the latency min. You load your favorite amp simulation on your favorite DAW and go! No latency, and dynamic response simus effects play like a real amp (I use Overloud VH2 - a must!) I broke it with as much as a real amp ... And my neighbors are happy!

As I mentioned in introduction, the price seems unbeatable view of the services offered. The quality of wood and general competing bill some Les Paul midrange price for more than 50% lower. To have tried a few in the store, that&#39;s what I felt in laying hands on some of these guitars. Do not take my word for it and make your own experience ... We hear after

justplug08's review (This content has been automatically translated from French)" Be careful!"

No problem for most electronics. No cracks, progressive level settings. Mics respond well. No problem on the 3 position push-pull for the selection of micro acoustic humbuckers and a mixture of two microphones, the passage from one to the other is inaudible!

The bridge and the tune-o-matic can sustain correct ... no more.

The mixture of acoustic micro humbuckers and offers a very interesting. At once sweet and bright, very effective rhythm.

Against by the microphone sound alone is disappointing, the picking is not persuasive ...

Huge problem: even after adjusting the tune-o-matic maximum spacing, with an action shot unplayable, a horrible crimp on the strings of the bass mid and between the twelfth and sixteenth box. It is irreversible on the guitar I ordered!

Line6 pod HD300 played with, no way to catch the shot even with effects set to the millimeter!

It's really sad because this guitar would have been worth the detour.

I have not kept this guitar, I tried many other models before buying ... G & L, Fender, Gibson.

Really the quality of the handle (righteousness) is not waiting for you! I do not understand how this type of instrument can pass quality tests?

I do not have that choice again and I preferred to spend my path and request a refund rather than an exchange.

I do not necessarily recommend this guitar very versatile, but I warn about frisages (very present with the micro acoustic). Take the time to test this guitar on all strings and all positions!

Published on 09/15/11
Epiphone releases the Les Paul Ultra-III, which fuses the look, design and shape of a classic Les Paul with modern features.