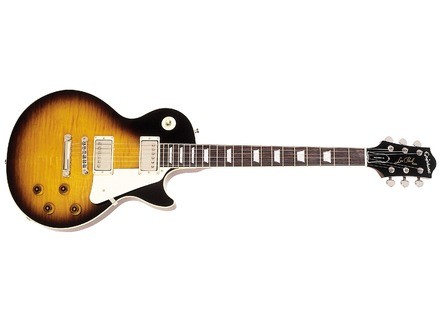 enzobiwan's review (This content has been automatically translated from French)

Epiphone Elitist Les Paul Standard Plus
5
I bought this guitar used for 750 (a big deal!) State in almost nine and I am delighted with its quality. I pass by the possd a Gibson Les Paul Custom Epiphone and if it is not as gniale approaches it ...
factories in Japan with the United States components, including pickups, these guitars are it seems verifies every angle by Gibson luthiers United States before entering the market ...
say anything you would think a quality level Gibson, it has almost similar microphones (manufactured in the United States by Gibson!). The handle is not so standard that I expected, it is comfortable and beautifully finished

Channel hyper enjoyable for fans of Les Paul, the habitus of the Start 'will find it a little srement "bcheron" logic. Regarding Access in acute, it is as difficult as the other Les Paul, especially when standing o you have to play with the guitar vertically if you want to do a frenzied solo.
At the sound, it's the happiness, violin pickups Gibson United States irrprochable + = great sound. Simply plug into the amp and let the guitar talk!

I jou of Guns N 'Roses, of Aerosmith, blues, etc.. and I really found the sound I want, a warm, powerful, round and CHARACTERISTICS of Les Paul.
Only two of my Marshall rglages lights and go, the sound really comes from the guitar and no effects, it supports nicely elsewhere.

I bought six months ago and my opinion has not volumes: I compare it with the Gibson Les Paul Custom that I possdais some time ago and almost bear comparison! What is really on this guitar is gnial the table flaming / tiger CHARACTERISTICS of Standard plus, she is beautiful. We can qu'tre sduit the beautiful in Aesthetics, despite the shape of the head that some are ugly but I like and shows that this is not a Gibson but a Epiphone, and which foot to head with a scratch that has the sound of her cousins ​​2 3 times longer Chres ... right? Especially because she has "the" Les Paul's. In France the Elitist ctes are ill, we can find ultra INTERESTED prices, and when you see the price of a Gibson sound and Difference, we vote Epiphone Elitist!
Did you find this review helpful?yesno
»

jeanphilippe2861's review (This content has been automatically translated from French)

Epiphone Elitist Les Paul Standard Plus
5
Made in Japan, the United States rvis, 24 frets, the pickups are humbuckers United States 50 and SR 60 ST, the bridge:
The rglage: Volume 2 Tone + 2 + 3 slecteur microphone positions.
Channel lespaul an identical home gibson.
Employ the hardware is a word of high rev range, I would say even more it is superbly finished from some of Gibson Les Paul that can sortire today.

The handle is beautiful, enjoyable, its slides alone, acute at the CHAC is perfect, weight: quite heavy, but not of Mistra the woods used are a must: Mahogany + Rabl.
Otient is the sound quickly, it's easy you just have to play, everything is good.

For two years I have tried several MODELS: Start, tl gibson, gretsh .... but it is trrible it plutt are scarce and people are not aware of ELITE in piphone he believe it is a classic piphone 400 euros, except that this one it 1750 is worth it in quotes: "the luxury of home piphone" THE BIG BOSS rvis by GIBSON, except that it passes through their hands because of the guitar that price you can not get help with selling his or her dfault does not ring. Frankly I redo this choice a hundred times.
Did you find this review helpful?yesno
»

bbrun's's review (This content has been automatically translated from French)

Epiphone Elitist Les Paul Standard Plus
5
My les paul paul was made in Japan like any epiphone elitist. I know that without a distributor, marketing and therefore the production of these guitars was halted in 2008, the mine has been verified by Gibson USA on 21/04/2008. She looks exactly like that of the photo, she looks great (it's true that we love the shape of the head). The neck is a thin profile, a '60 it is very pleasant to play even when you descend into the acute (it's still a good les paul eh ...) the pickups are humbuckers U.S. 50 and SR 60 ST, a selector 3 Positions: bridge, neck / bridge, stick with a volume and tone micro which gives a lot of possibilities.
For the price I think it can not be better. (Mine was bought for 660 euros on ebay USA, it was a test in a guitar shop, it was almost new) it was delivered to me in a beautiful Pouche luxury with all the papers of authenticity and 4 String games

The handle is a profile 60 'super nice for those who do not have a parpain in the hands .... The ergonomics are good, although it remains a somewhat heavy guitar and access to acute not simple (like a les paul what!). It is easy to set against the sound level is defined as well as the differences that we touch a knob or selector.

I think this guitar sounds very good course that is to say only does it matter poisition selector or adjustment of tones that sounds really good. I branch or through a digitech RP 500 then head Marshall JCM 2000 TSL 60 (baffle marshall 1922) or directly through the amp and its sounds really nikel. From reggae, to rock to blues to hard so it is ACDC Led Zeppelin's thunder, she still excels in all music asking a warm and round.
I still think it has some limitations for the metal (its not cold enough). I put my 9 / 10 to be objective because it is limited to the metal but I do not play very little, for me it deserves 20/10 !!!!!

I use it for 1 year. I had a few guitars before (I've also built one), I have a Charvel U.S. I thought unbeatable value for sound money, well, I think she beat her!!
This guitar is a real bomb, superb, very well finished, a sound like all hell on this guitar, I do not throw anything, and at the price I paid I will ever be 100 times that choice, I think never part with it.
Watch out, there are ways to find some (or elitist les paul standard) on ebay. I put my six months of intense surveillance and lost some bids ...

See all 130 photos of Epiphone Elitist Les Paul Standard Plus »